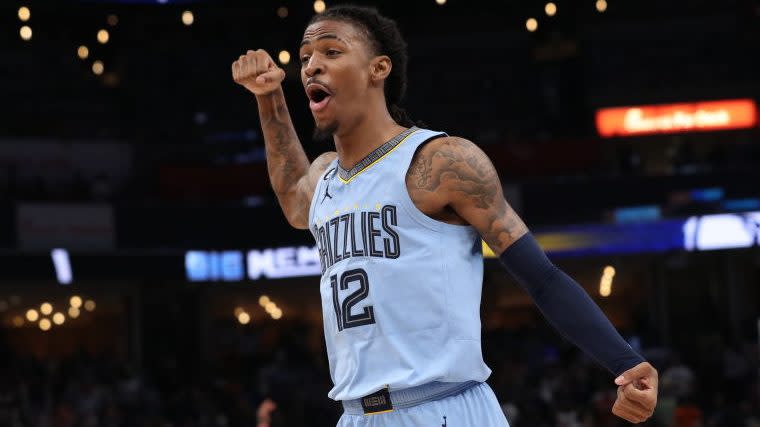 MEMPHIS, Tenn. (AP) — Ja Morant and Desmond Bane scored 38 points each to lead the Memphis Grizzlies to a 134-124 victory over the Brooklyn Nets on Monday night.

Morant and Bane also each had seven assists each. Bane, who struggled shooting to start the season, was 14 of 21 overall and 8 of 11 from 3-point range, the eight 3-pointers a career-high. Santi Aldama scored 17 points for Memphis.

Kevin Durant and Kyrie Irving each scored 37 points for the Nets, Nic Claxton finished with 16 points.

The last time four players scored 35 points or more in a game, “Scarface” and “Return of the Jedi” were still in the theaters, and Michael Jackson’s “Billy Jean” was the hottest song on the radio.

Memphis broke open a close game with a 17-2 run early in the third quarter. Bane scored 19 in the period. Durant was able to keep the Nets close but had little help as the Grizzlies extended their lead to as many as 15. Despite Durant’s 17 in the quarter, Memphis outscored the Nets 45-28 in the third.

Memphis never relinquished its lead in the fourth.

Things got testy in the second quarter as Durant and Dillon Brooks began chirping at each other enough to draw double technicals, two of several in the first half. Those and a pretty steady stream of foul calls kept the game from gaining any pace.

Through the half, the Nets relied on its two-pronged scoring attack with Irving and Durant, along with inside help from Claxton. Morant with an assist from Aldama fueled the Grizzlies offense.

Neither team would build its advantage to double digits before halftime.