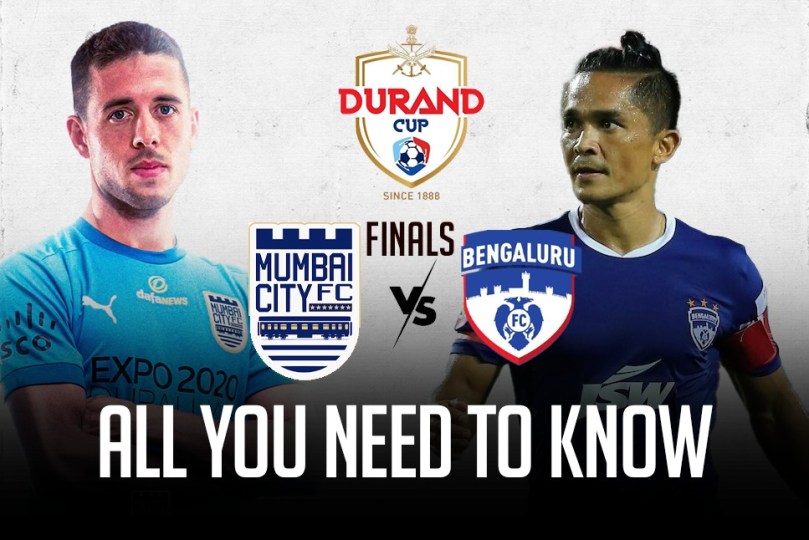 Durand Cup 2022 Finals LIVE- Mumbai City FC vs Bengaluru FC LIVE- We reach the final stage of the 131st IndianOil Durand Cup where Indian Super League (ISL) giants Bengaluru FC (BFC) and Mumbai City FC (MFC) will lock horns for an entertaining clash at the Vivekananda Yuba Bharati Krirangan. The stage is set for the epic clash between the two sides on 18th September from 6:00 PM. Mumbai City FC defeated local favorites Mohammedan SC to seal their spot in the finals. On the other hand, Bengaluru FC entered the finals after an unfortunate own goal from Odei sank Hyderabad FC in the semis. Follow Durand Cup 2022 Finals LIVE Updates on Inside Sport.IN

A last-gasp goal by Bipin Singh helped Mumbai City FC pip Mohammedan Sporting 1-0 and advance to the Durand Cup final in their maiden appearance. It was a tale of missed chances by both teams and just when the first semifinal was headed for extra-time, Mumbai scored the all-important goal in the 90th minute. The solitary goal from Bipin was enough to seal the fate for the Islanders.

An own goal at the half-hour mark by Spanish defender Odei Onaindia Zabala, was enough for Bengaluru FC to seal their spot in the finals. In what happened to be a cage match with Bengaluru FC largely resorting to defensive tactics after going 1-0 up, Hyderabad FC tried their best to make a comeback. Despite having 68% ball possession, a resolute defense by the Bengaluru outfits took the game in their favor.

Bengaluru, book your tickets! 🎟️
All roads lead to Kolkata on Sunday because the Blues are in the #DurandCup2022 final! 🔥 #WeAreBFC ⚡️ pic.twitter.com/G9inQajkdE

The Sports18 network has the right to broadcast Durand Cup 2022 matches in India. Matches will also be available for LIVE Streaming on Voot and JioTV