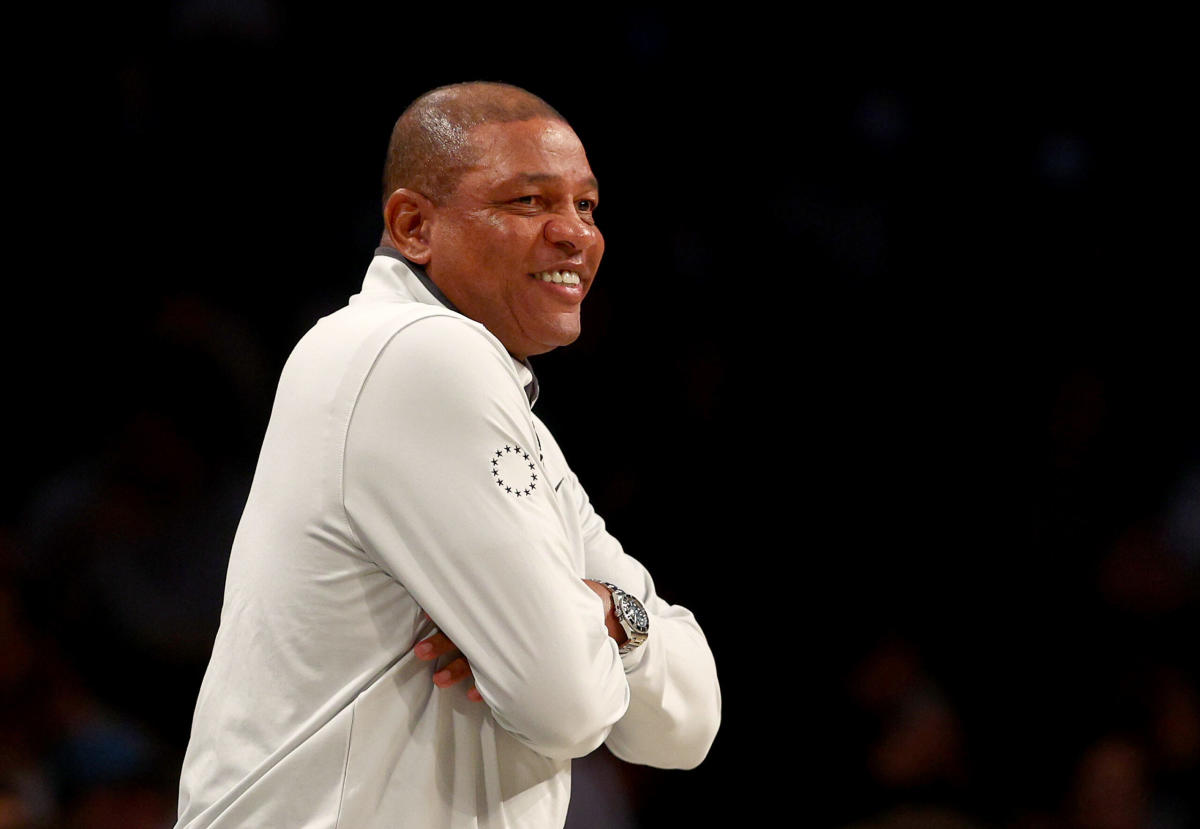 The Philadelphia 76ers are coming off a season where they were eliminated from the Eastern Conference semifinals for the fourth time in five seasons and that triggered some changes on the roster.

The Sixers went out and brought in PJ Tucker, De’Anthony Melton, Danuel House Jr., and Montrezl Harrell to add some toughness and grit to the roster. The Sixers really needed that type of aspect added to their roster as it was something that the players were upset about following the loss to the Miami Heat in May.

Coach Doc Rivers joined “The Woj Pod” with ESPN’s Adrian Wojnarowski to discuss the team getting tougher as well as the comfort level of James Harden and Joel Embiid along with a variety of other topics.

Rivers on the team getting tougher

“I think people think when you say ‘we have to get tougher’, they think physically. It’s usually mentally. Mentally tougher, mentally sharper, mentally aware, and sustained mentally. I think that’s what, at least that’s what I usually mean when I use the word tougher. Part of that is physical too, obviously, I mean, you have to be a more physical team but a lot of it is just mental awareness. What happens is mental fatigue and PJ is on it. He is so focused. It’s been a great energy to our team.”

“Not really. I mean, the physical toughness? Yes. It’s not dramatically, but it is different. (Pat) Riley had the rule, foul out for the first five minutes, and they’ll stop calling it now you can turn the game into a bloodbath. You can’t do that anymore, but the mental toughness has not changed at all. All the great teams are mentally tough. There’s no champion that didn’t have a great mental toughness. Now, they may not have looked like a tough team, but Golden State I use as a great example. I think the fan looks at them as a finesse basketball team, and yet they’re the mentally toughest team in basketball, and that’s what allows them to win.”

For context for the following answer, Wojnarowski revealed that a Sixer told him that Rivers had maxed out their talent in the 2021-22 season:

“As the one player said, we did max our talent out last year. We went as far as we should have gone and it’s a tough spot for a coach when you’re sitting there and you visually see it as the playoffs was going on. You’re still trying to figure out a way, let’s see if we can steal this series somehow, but it doesn’t matter how many players you bring in, that are going to bring it, they have to bring along the guys that don’t have it, don’t know it, and haven’t seen it. I think the number one thing that helps is competition. We’re 12 deep and the guys that have been here have always played, they’ve been comfortable, now all of a sudden, they’re looking around, and there’s no guarantees on who’s going to play. That’s going to force some type of mental toughness and so that’s been really good for us.”

On the live conversation with Harden at training camp

Those who haven’t seen the conversation can see it here.

“I forgot I was live. I was live and, you usually don’t want any of that out, but none of that was bad. So the fact that it did get out, it just showed the communication you have to have and coaches, we have to sell the program. We have to sell what we need to do and we have to get our players to believe it. Even though James is a superstar, and he is, you still got to make sure that we’re all on the same page and we’re all on the same page as far as cooperation of winning. That’s the whole key and we all know that. Teams that cooperate with each other win and teams that don’t, don’t. You need each guy and James is so important in that because James right now is trying to do everything we tell him to do and I wanted to make sure he remembered who he was. In that, be you, but he this also, and then we can win together as a team. And I thought that was very important. I literally say something to that effect every day to James, because I think he’s that important to this team.”

On having Harden grow with Embiid after the 2021-22 season

“It was tough and, you’re right, it was so brief. The communication part was hard because he ran in and then played and the season is over, you know? So for me, the first thing I saw that I didn’t know—I always knew James was a good passer. You knew that, but he was such a great scorer, you didn’t see his ability to see the floor and play make and that’s what hit me first like ‘Man, this guy we don’t have a point guard. This guy can be a scoring point guard’ and I use the word scoring Magic Johnson for us, but the trick is to get him to do that plus score and that’s hard to do and there’s a fine line. James has never played on a team where he’s the second-best scorer and, for James Harden, that’s a hell of a statement because he’s one of the greatest scores of all time. He comes to a team where he’s playing with the leading scorer in the NBA and I saw that like ‘can that work?’ People forget in the 24 games they played (the actual number was 21 games played in the regular season and 10 in the playoffs), James and Joel were the No. 1 pick-and-roll duo in the NBA and it was at 50% efficiency as far as I was concerned. So what I saw this summer, if we can get that up to 75% efficiency, we will be very hard to beat. Especially, down the stretch of games.”

On sacrifices Sixers stars must make

“It wasn’t clear from the beginning, because we didn’t know how it would work. How it would fit. We didn’t know what pace we could play at. We didn’t know a lot of things when we got James. We didn’t know how efficient he was in ISOs. He wasn’t in the greatest shape so there was a lot of unanswered stuff for us. The number one thing is the one-two part. The number two thing is the actual doing it part. You’ve been around this league, and I have as well, when you get the stars to cooperate totally, and when you get them to understand you have to give something back. The old thing is, you ask every player in the league, do they want to win a championship? Everyone is gonna say yes. When you ask them to give up something. Then that goes down to about 20%. What are you willing to give up? What are you willing to sacrifice? Because you just can’t do whatever you want to do and think you’re gonna win, especially if you haven’t won. James has been in the league a long time and is yet to win. Joel’s now been in the league awhile and yet to win. So clearly, we have to find a way for them to win and both of them have to give up something to each other. Bill Russell had that statement, if I’m the only one that can be great, we can’t win, but if I can be great and give room for my teammates to be great, then I’m a winner. That’s what we’re trying to get all of our guys to see.”

On not letting outside noise affect his coaching

“You can’t let what can happen to you affect how you should coach. You really can’t. You have to build your team. When I when I took this job, I took this job because of Joel Embiid and Ben Simmons and I looked at those two guys, and I said ‘Man, if we get the right guys around them, we can build this into a team that can win titles, and be great every year’. I didn’t think they were ready when I took the job, but the culture was changing and Ben had an amazing year that year. We ended up having the best record in the East which no one predicted. We were not ready to win yet and that was clear, but we had taken a huge step. So for me, I still had to coach them the same way like building. Trying to build culture trying to build on the inside and eventually, I thought it would end up winning on the outside. Then Ben got upset, obviously, but that doesn’t mean you should stop trying to build this group. That’s just the way it is.”

On the energy of Tyrese Maxey

“It’s amazing. First of all, he’s never had a bad day and he helps me. I look at that. There’s days, just life comes in. Tyrese Maxey, really, I think since he’s been here, he’s had two days where I can remember that he’s emotionally down. Game 7, that we just had, he was down or, you know, Game when we lost to Miami. That last game, he was down. You could feel it in the game and then he had another day, but those types of guys, as a coach, you just don’t want them to ever get spoiled. You don’t want them to ever change. You want him to stay in that happy zone. He comes to play every night. He competes. He’s tough, but he loves it and he’s having fun doing it and his work ethic is contagious. Yeah, those are the guys that give you energy. It makes you love coaching.”