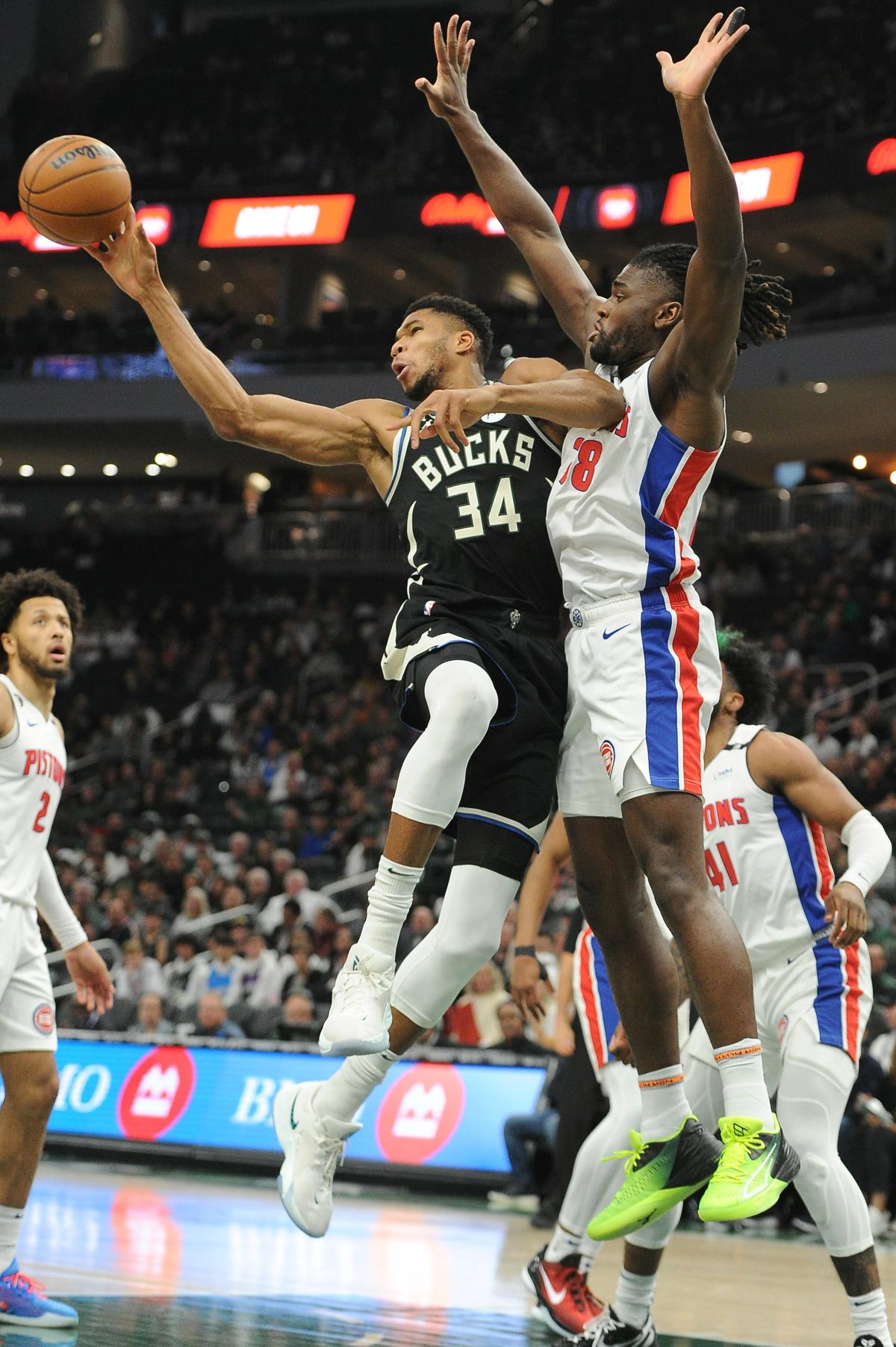 The Milwaukee Bucks repeatedly threatened to bury the Detroit Pistons for good.

But the Pistons wouldn’t let them.

A pair of free throws by George Hill gave the Bucks an 85-69 lead with 3:11 remaining in the third quarter. The Pistons, who rallied back from a 15-point deficit in the first quarter and stayed within striking distance for most of the night, had one more run in them.

The Pistons used a 25-13 spurt to cut the deficit to two midway through the fourth quarter, and tied the game with just under a minute remaining with a cutting layup by Isaiah Stewart. But a clutch 3-pointer by Jrue Holiday with 45 seconds remaining ended up being the dagger Milwaukee needed to pull away for good.

The Bucks defeated the Pistons in Milwaukee, 110-108, behind a 31-point night from Giannis Antetokounmpo. Cade Cunningham, who continued his run of strong play Monday, missed an elbow jumper and 3-pointer in the final 40 seconds that would’ve given Detroit a shot at winning. It was however another big night for Cunningham, who led the Pistons with 27 points along with seven assists and six rebounds.

BUT THEY BEAT THE CHAMPS:Win over Warriors teaches young Pistons an important NBA lesson

Bojan Bogdanovic finished with 23 points, Jaden Ivey scored 19 points and grabbed seven rebounds, and Isaiah Stewart added 11 points and 11 rebounds. Hamidou Diallo also had a good night with a season-high 13 points and five rebounds in 20 minutes off of the bench. Holiday scored 25 points and dished 10 assists for Milwaukee, and Brook Lopez added 24 points and nine rebounds.

Detroit managed to keep the margin close against a contending Bucks team despite being on the second night of a back-to-back, as the Pistons defeated the Warriors at Little Caesars Arena on Sunday. They outscored the Bucks, 31-22, in the final period, holding them to 7-for-24 shooting.

Entering Monday, Cunningham was in the midst of a hot streak. In his previous three games, he averaged 28 points, nine rebounds and 7.7 assists on 50% overall shooting. His midrange shot has become almost automatic over the last week, and he’s had little issue getting to his spots.

See also  Giannis Antetokounmpo to play for Greece in Eurobasket

He continued his strong run of play against Milwaukee, tallying 19 points on 8-for-13 shooting in the first and second quarters. Cunningham cooled off in the second half, making just 3-of10 shots. But he dished six assists in the final two periods, including a feed to Stewart that tied the game at 105. His two missed shots on Detroit’s final two possessions were an unfortunate end to an overall strong night.

Ivey had few issues cutting through the Bucks’ stout defense, and his performance was a prime display of the natural talent that made him a consensus top-four pick and steal for the Pistons at five. His first step breaks down defenders, but it’s what he does after his first step — the way he’s able to slither between traffic and finish with either hand — that makes him dangerous.

Ivey scored 11 of his 19 points in the second half. Milwaukee was a great test, as Brook Lopez and Antetokounmpo are two of the NBA’s best rim protectors. He second-guessed a drive against Lopez in the first quarter, and ended up turning the ball over on a bailout pass to Stewart. It wasn’t a sign of things to come, as he found his rhythm soon after.

See also  Cavaliers plan to hold on to Collin Sexton, not flip him after trade

It appeared Jalen Duren would miss some time after he tweaked his left ankle in the fourth quarter of Sunday’s home game against the Golden State Warriors. He couldn’t put any weight on it as his teammates helped him off of the floor.

A BIG LESSON:Defense is the Detroit Pistons’ weakness early this season. Here’s the plan to fix it

As expected, he was ruled out ahead of Monday’s game with a left ankle sprain. The Pistons subsequently turned to Nerlens Noel, who Dwane Casey characterized as an emergency option toward the beginning of the season. With Marvin Bagley III also still awaiting his return, Monday certainly qualified as an emergency situation.

Noel made his season debut toward the end of the first quarter, and logged close to 19 minutes as Stewart battled foul trouble. It was a quiet night for the veteran center, as Noel finished with two points, four rebounds, a block and a steal. Noel will be thrusted into a backup role until either one of Duren or Marvin Bagley III, who is nearing his re-evaluation date as he recovers from an MCL sprain, returns from injury.