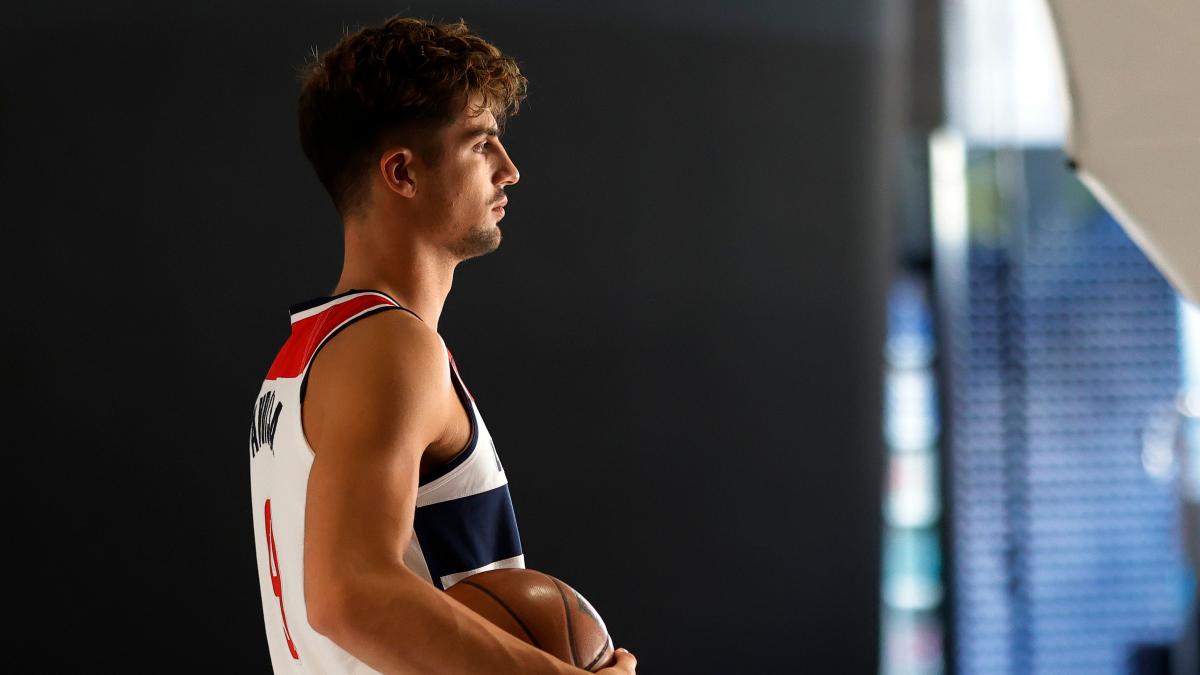 WASHINGTON — The main portion of Wizards’ practice, a rare one at Capital One Arena, was over as some of the team’s youngest players ran up and down the blue and bronze floor in a 3-on-3 scrimmage. Most of the veterans had left to go about their days while Deni Avdija sat courtside, laid back in his chair.

He stood up and walked over to the tower speaker behind the bench. The Wizards’ arena has dozen of speakers, with enough wattage to properly host the biggest music acts in the world. But unlike those, this speaker had a DJ sound board.

Avdija added sound effects to a metronome beat, as he bowed his head, now replete with bleach blonde tips. That was just a sample of his off-court hobby of producing music. It turns out Avdija is a budding musician, who spends time in the studio to craft melodies — sometimes rap, sometimes reggae or jazz.

“It’s calming for me,” Avdija told NBC Sports Washington. “I just do it for myself, for my heart and my soul.”

Avdija, 21, is in a good place. He was just named the Wizards’ starting small forward, the team’s most visible roster battle in training camp. It is worth a reminder this is the second time he has done that as the same position was declared “wide open” his rookie year. He won it then, too.

This time, however, it was despite missing the Wizards’ entire preseason schedule due to a groin injury. And it was despite the fact he was competing against the more experienced Will Barton, acquired over the summer in a trade with the Denver Nuggets.

Set aside those factors and you can see why the Wizards made the move. Avdija’s size and defense makes him an ideal complement in a starting five that includes two guards, Monte Morris and Bradley Beal, who stand 6-foot-2 and 6-foot-3, and next to frontcourt players known for their scoring, Kyle Kuzma and Kristaps Porzingis.

Avdija can help solder all of their skillsets together and he’s ready to be a star in that role.

“It just shows coach and the organization trust in me. They chose that they believe in me and they think that I deserve to be a starter and create and get some of the pressure off the other guys in the starting five. I feel like I’m kind of the glue guy in the starting five,” Avdija said.

“I’m trying to make the right play. I’m playing defense, I’m rebounding. I’m trying to do everything I can to help the team and get pressure off from a couple of players that you could say are ball dominant more.”

Avdija’s role in the starting group is likely to feature a sharp duality between the two ends of the floor. On defense, he will be tasked with demanding assignments, as the Wizards lean on his versatility to guard multiple positions. On offense, he will likely have to defer to his teammates who have more distinguished resumes as NBA scorers. Avdija’s role means his success could be tied to every number in the box score except for points.

That may be eye-opening to his supporters overseas, who watched him blossom playing in Israel as an on-ball playmaker. There is irony in Avdija’s new role, as his value as a prospect entering the 2020 NBA Draft was largely tied to his offensive skillset.

One NBA general manager remarked to NBC Sports Washington last season that they were surprised at Avdija’s rapid progress on the defensive end. They missed it in the pre-draft process.

That sentiment, perhaps shared by others around the league, also serves as an indirect reminder of his offensive potential. He was widely projected as a top-10 pick because of his mobility and ball control at 6-foot-9. Avdija still believes in those capabilities and hopes to unlock them over time.

Avdija reassured himself of his play-making upside this past summer when he spent time starring for Israel’s national team. It was the first time he served as a leader on a senior-level team and so the offense ran primarily through him as a point forward.

“I didn’t do it for a long time, playing a lot on the ball, facilitating and creating. So, it felt good. It felt that I still have the abilities and I still have the skill to do it,” he said.

One of the opponents Avdija and Israel faced was Auburn University, the 15th-ranked team in the Associated Press’ preseason top-25. Avdija did his part as a professional operating against amateurs, scoring 25 points.

Afterwards, Auburn players approached him with questions, for his advice and what it was like to play in the NBA. It gave Avdija a glimpse of what his basketball journey could have been like if he went to college in the U.S. He had chances, he says, with top-10 programs before deciding to go pro in his home country.

For now, Avdija’s focus will be on mastering the defensive end and the little things he can do to empower those around him in the starting lineup. As he looks further down the road, with goals of becoming featured more prominently on offense, those skills will be sharpened behind the scenes.

That’s what Avdija would like Wizards fans to know. Whether you see it or not, he’s putting in the work.

“They don’t know how much I want it, how much I’m working extra, how much time I’m in the gym. I think that if you calculated shots in a player’s season, extra shots staying in the gym, I’m definitely up there. I might even hold the record,” Avdija said.

“I was there every night, when the cameras were not around. I’m not trying to prove to anybody that I’m working extra. I think half the organization doesn’t even know that. Maybe they do.”

Avdija is barely of drinking age, but he carries with him a seasoned perspective, having been a professional for years before joining the NBA ranks, and with a diverse background rooted across the globe. He says he works hard in part to honor his ancestry, knowing there are many people around the world cheering for him to go further than any player with Israeli descent has gone in the NBA.

Avdija’s heritage is important to him and it means a lot to his admirers who can relate. Just recently, the Capital Jewish Museum requested memorabilia of his to display, just a few blocks away from the arena in Chinatown.

That’s an honor not many 21-year-olds can count as their own. For Avdija, it’s just a reminder of his potential impact long-term. For now, he’s got a specific role for the Wizards and he plans to thrive in it.