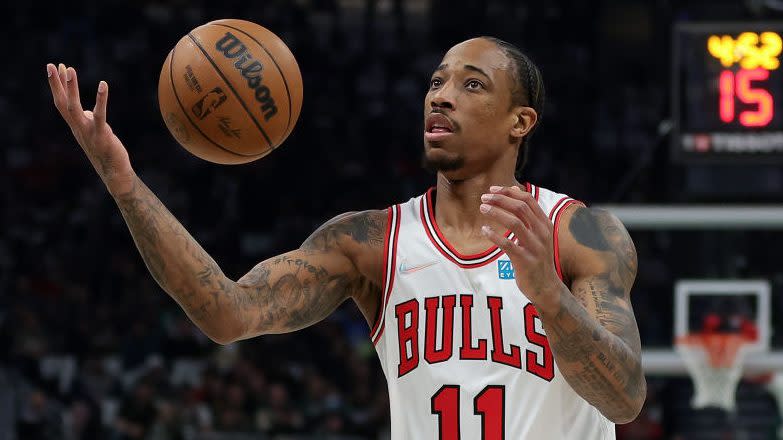 DeMar DeRozan was the player Chicago leaned on in the clutch last season, and with good reason — he shot 53.5% on looks in the final five minutes of a game within five points. That jumped to 55.6% on shots in the final minute of a game within three points, and it included DeRozan hitting a string of game-winners.

What drove his clutch play? DeRozan said on the Draymond Green Show podcast the combination of an early-season airball in the clutch and the ghost of Michael Jordan pushed him to make sure he lived up to the Bulls’ legacy in big moments (hat tip K.C. Johnson of NBC Sports Bay Area).

Last Oct. 28, with the Bulls sitting at 4-0, DeRozan attempted a game-winning buzzer beater against the Knicks at the United Center.

“I airballed. And i just felt the whole vibe of everything, like, what was that? I felt like I disrespected the aura of what these fans are used to seeing from obviously MJ hitting game-winners,” DeRozan said during an appearance on “The Draymond Green Show.” “You live for those moments. And to be in that moment for the first time my fourth or fifth game, and I take that shot, I told myself I would never be in that situation again. To let that same feeling happen for these fans.

“It was that game to where it was like every shot I take in the clutch, I’m going to make it count every single time. You look back at all the moments that I had in that arena, it was more so like, ‘Yo, I’m trying to inherit the ghost of Michael shooting his fadeaway with the clock running down.’ I carried that to heart after that moment because you felt it from the fans. You felt it on social media when it was like,’ Yeah, you’re taking that.’ It was like, ‘Nah.’ That’s how I carried it every time I walk in there. You see Scottie (Pippen) and Michael. You see Bob Love. You see these jerseys up there and you hear this music when you come out, it’s the same thing. You gotta live up to it.”

DeRozan lived up to it in a bounce-back season where he averaged 27.9 points, 5.2 rebounds and 4.9 assists a game for the Bulls, was named both an All-Star and All-NBA. He helped drive the Bulls’ early season success, which faded in the second half due to injuries to key defenders (Lonzo Ball and Alex Caruso).

It’s worth listening to the entire podcast, DeRozan gets into how hard it hit him when what he thought he was a lock to play for the Lakers fell through as the team pivoted to sign Russell Westbrook. He said he was in a dark place but the deal with the Bulls both turned things around and motivated him to prove everyone wrong (the three-year, $81.9 million contract helped as well).

Here’s more on the Bulls

DeMar DeRozan on being clutch for Bulls, “I’m trying to inherit the ghost of [Jordan]” originally appeared on NBCSports.com