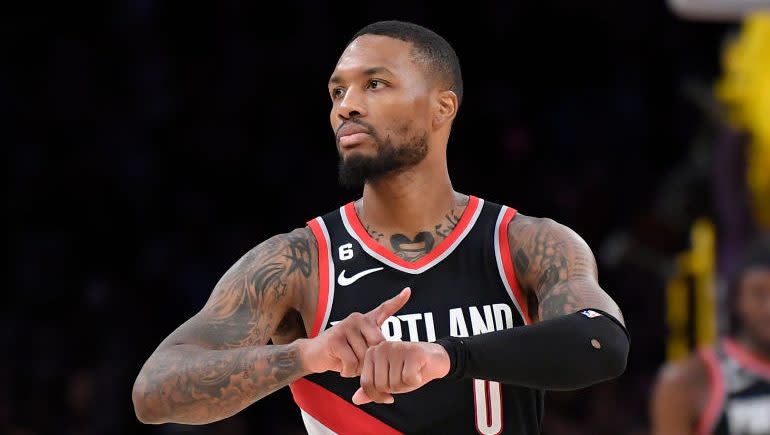 LOS ANGELES — Three Things is NBC’s five-days-a-week wrap-up of the night before in the NBA. Check out NBCSports.com every weekday morning to catch up on what you missed the night before plus the rumors, drama, and dunks that make the NBA must-watch.

1) Damian Lillard is all the way back. The Lakers are 0-3 because of it.

What they built before had stalled out, so in the past year Portland overhauled its roster. The Trail Blazers front office leaned hard into more athletic players who could provide defense and versatility — Jerami Grant, Josh Hart, Gary Payton II, Justise Winslow, and re-signing Anfernee Simons.

But it was all a bet on Damian Lillard. Could the core muscle surgery he had last season bring him back close to his All-NBA level self?

Does his back-to-back 41-point games answer that question?

The second of those came Sunday against the Lakers, where Lillard led a comeback from seven points down with less than two minutes to go. The 106-104 win improved Portland to 3-0 on the young season — and dropped the Lakers to 0-3.

Lillard has his explosion, his burst back, he’s extending better around the rim again, but his shot never went anywhere. His biggest jumper of the night was a pull-up 3-pointer with :12.4 seconds left in the game to give the Trail Blazers the lead. Vintage Dame Time.

Portland made their run in the fourth quarter for a few reasons. The biggest strategy change was Chauncey Billups deciding to put Jusuf Nurkic on Russell Westbrook — that allowed the Blazers’ big man to play back in the paint, take away Westbrook’s driving lanes and daring him to shoot jumpers (Westbrook was 1-of-5 shooting outside the paint Sunday), all while being in position to help others. The Lakers never figured out how to attack the Trail Blazers with Nurkic back like that.

Second, the Lakers’ shot selection was unimpressive under pressure. The most egregious example was with the Lakers up by one with :27 seconds left in the game and the ball, and Westbrook took a pull-up midrange jumper with :18 seconds left on the shot clock (he said after the game he was trying to go for a two-for-one). Coach Darvin Ham ended up sitting Westbrook for the final seconds.

The other key late: Anthony Davis picked up his fifth foul. He couldn’t be as aggressive defensively, which showed with the game on the line, tied at 104-104, and Grant went right at LeBron and got a shot up around Davis — it was the game-winner.

The vibe around the Lakers after the game was ugly — this was one they felt they should have won. It’s one thing to lose two games to start the season to two teams that are the favorites in the West — the Warriors and Clippers — and another to blow a lead at home to a team the Lakers will be fighting for a postseason spot. There was palpable frustration in the Lakers’ press conferences and locker room.

The Lakers are defending better for Darvin Ham, they are playing faster and doing a lot of things right, but it all gets cut off at the knees because this team can’t shoot from the outside.

Lillard can — he is back. And the Blazers’ bet on him has paid off with a 3-0 start to the season.

2) Break up the Jazz

The Utah front office told anyone who would listen this offseason, “we’re not trying to lose,” a statement greeted with eye rolls if not outright laughter.

The Jazz are the ones laughing now — they have started the season 3-0 after a Kelly Olynyk finger roll in overtime proved to be the game-winner against the Pelicans.

Even after trading Donovan Mitchell, Rudy Gobert and Royce O’Neal, there are still quality NBA players on the Jazz roster: Mike Conley, Lauri Markkanen, Jordan Clarkson, and Collin Sexton, among others. They are also playing with the edge of a disrespected team.

Markkanen had 31 to lead the Jazz, getting some of that by going right at Zion Williamson. While Zion finished with 25 points on 10-of-16 shooting, he was -7 because his defense could be exploited. Utah was in control of this game but things changed after Zion suffered a posterior hip contusion and had to sit out. Willie Green also sat Jonas Valanciunas at the same time, went smaller with Larry Nance Jr. at the five and a bunch of bench guys, and almost pulled off the win.

The Pelicans’ Brandon Ingram only played 11 minutes and none in the second half after he was hit in the face in a collision with Naji Marshall. He was being checked for concussion-like symptoms.

How long Utah’s hot streak to start the season holds out remains to be seen, but the pictures of Danny Ainge driving the tank for this team to get Wembanyama may be premature.

Donovan Mitchell is a bucket.

That was always going to fit just fine in Cleveland, which needed the additional shot creation and scoring. Mitchell has been worth the price early, dropping 37 on Sunday — and the Cavaliers needed every one of those to beat the Wizards in overtime, 117-107.

Mitchell is the first Cavaliers player ever to score at least 30 points in his first three games with the team. He had to pick up the scoring on Sunday with Darius Garland out (left eye laceration). Mitchell got some help off the bench in this one with Cedi Osman scoring 16 and Dean Wade adding a dozen.

Bradley Beal had 27 for the Wizards, while Kristaps Porzinghis had 18 points and 11 boards.

Both the Cavaliers and Wizards are 2-1 to start the season.

Check out more on the Lakers

Three things to know: Damian Lillard is back, Lakers 0-3 because of it originally appeared on NBCSports.com