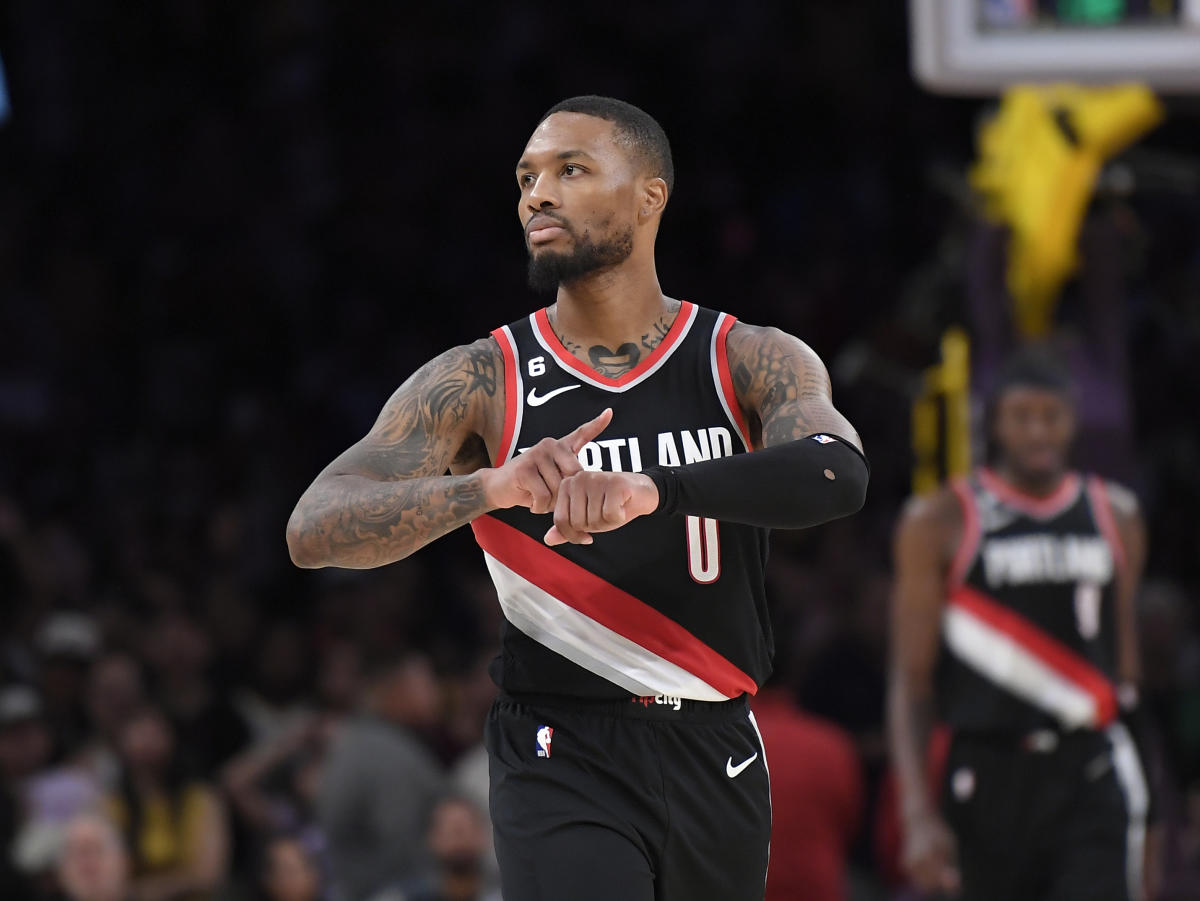 On a Sunday night in April, Damian Lillard strode to center court. It was a walk he hadn’t made in a while, thanks to abdominal surgery that shut him down in January and limited him to a career-low 29 appearances. But with the spotlight shining on him once again, the six-time All-NBA selection grabbed the microphone, looked up at the crowd in the stands at Moda Center, and made a promise.

“A tough season, a lot of adversity this year,” Lillard said, moments before tipoff of a 31-point loss to cap the Trail Blazers’ worst campaign in nearly two decades. “A lot of things came up that we didn’t expect. But I want you to know one thing: This will not continue. Next year, we’re gonna be back, better than before.”

Entering the season, it seemed reasonable to wonder whether that was really the case — whether Lillard could come back from his lengthy layoff looking like the fire of old, whether bright spot Anfernee Simons could resume his ascent toward offensive stardom with Dame back on the ball, and whether a Blazers team that had mostly underwhelmed in the previous three seasons really had the firepower to climb back up the standings in a brutally competitive and seemingly ever-deepening Western Conference.

Well, so far, so good. One week into the season, every team in the West has tasted defeat … except for the Blazers.

After knocking off the Kings in Sacramento on opening night, outlasting the Suns in overtime after Lillard offered some food for free-throw-line thought to Deandre Ayton, and beating the wobbly Lakers as Dame Time returned to Hollywood, the Blazers welcomed two-time-reigning MVP Nikola Jokic and the Nuggets — the team that unceremoniously drummed Portland out of the playoffs in 2021 — to the Pacific Northwest on Monday. It wasn’t a particularly warm welcome:

Portland exploded out of a 13-point second-quarter deficit to incinerate the visitors with an 80-point second half — the franchise’s highest post-intermission output in 33 years — to cruise to a 135-110 win. Simons, who had struggled to get his shot going through the season’s first three games, found his touch during a third quarter that saw him drill six 3-pointers and score 22 of his 29 points in a five-and-a-half-minute burst. In the blink of an eye, the Blazers had broken the game wide open and were on their way to their first 4-0 start since 1999.

While Simons buried the Nuggets in the third, it was Lillard who set the stage for him to do so. The vet scored or assisted on 12 points in the final four minutes of the second quarter, chopping Denver’s lead down to two possessions entering the second half; he then gleefully force-fed his young backcourt partner’s hot hand, notching the assist on four of Simons’s game-breaking third-quarter triples. Dame would finish with 31 points on 16 shots to go with eight assists against one turnover in 34 pristine minutes, his fingertips all over an offensive onslaught that saw the Blazers score a scorching 145.2 points per 100 non-garbage-time possessions against the Nuggets — the most efficient offensive performance of the season thus far, according to Cleaning the Glass.

Concerns about how the 32-year-old Lillard might look after returning from surgery to repair a core muscle issue that had reportedly ailed him for years appear to be unfounded. He’s got back the burst that allows him to beat defenders off the bounce and pressure the rim, averaging more than 14 drives per game, taking a higher share of his shots at the basket than he did in either of the last two seasons, and making two-thirds of his attempts in the paint. (He’s getting back to the line, too, averaging nine free-throw attempts per game, which would be a career high.) Just as important: Last season’s dip in long-range accuracy looks like an outlier blip on the radar, with Dame back up to 40 percent from distance and leading the NBA in attempts and makes through the opening week.

See also  ‘Those are things I’ll never forget,’ says Juan Toscano-Anderson of winning a title with the Golden State Warriors

As has been the case for the last decade, the Blazers’ best hope of remaining competitive on a nightly basis rests with Lillard playing at the near-MVP-level to which he and the Portland faithful have become accustomed. Their best hope of contending, though, lies in surrounding Dame with enough defensive help to allow his offensive heroics to hold up … and the early returns there have been positive, too.

Chauncey Billups took the Blazers’ head coaching job last season intent on turning up the heat and transforming what had been a conservative defense under predecessor Terry Stotts into a more frenetic, attacking unit. That plan blew up in his face almost immediately, and ultimately generated enough busted coverages and wide-open corner 3-pointers that the Blazers fielded the NBA’s second-worst defense — just as they had in their final season under Stotts.

Billups has ratcheted down the ball pressure early in Year 2 — Portland has blitzed the pick-and-roll just eight times in its first four games, according to Second Spectrum’s tracking, after doing it nearly eight times per game last season — in favor of a return to the more conservative drop coverage aimed at funneling drivers into contested midrange looks with Jusuf Nurkic lurking in the paint. So far, a roster featuring more size and athleticism on the wing than the franchise has seen in years — top offseason target Jerami Grant (who’s also off to a strong offensive start, averaging 17 points per game on .626 true shooting), holdovers Josh Hart, Justise Winslow and Nassir Little, highly touted lottery pick Shaedon Sharpe and ex-Clippers first-rounder Keon Johnson — has held up its end of the bargain, entering Tuesday’s games ranked 10th in the NBA in defensive efficiency, even with expected ace stopper Gary Payton II yet to suit up as he recovers from abdominal surgery.

It might be a little optimistic to expect that ranking to hold. Based on the shot profile the Blazers have given up — a lot of looks at the rim and corner threes — you’d expect opponents to shoot better against them than they have so far; if they start cashing in on more than 31.7 percent from the short corners, Portland’s defensive ranking could sink. By and large, though, the underpinnings seem stronger than they did a season ago: fewer blow-bys at the point of attack and fewer straight-line drives into open space; tighter, more disciplined closeouts and better contests on shot attempts; and top-five marks in both opponent free-throw rate and defensive rebound rate.

There’s a recipe there: Keep ’em in front, help in the right places at the right times, get a hand up without fouling, crash the boards and finish the possession. Consistent execution isn’t exactly exotic, but if you’ve got a baseline of size and athletic talent, and you nail the details more often than you don’t, you should be able to produce a decent-or-better defense. Pair that with a top-flight offensive engine, and you’ve got the makings of a team that cannot only make the playoffs, but maybe make a deep run.

Like Luka Doncic’s Mavericks last season. Or Trae Young’s Hawks in 2021. Or — now that you mention it — Lillard’s Blazers, back in 2019. Two weeks ago, few would’ve forwarded the notion that this iteration of the Blazers could travel a similar path, particularly in a crowded West. Dame looking like this, though, could change Portland’s outlook considerably — and, just maybe, make good on that promise.