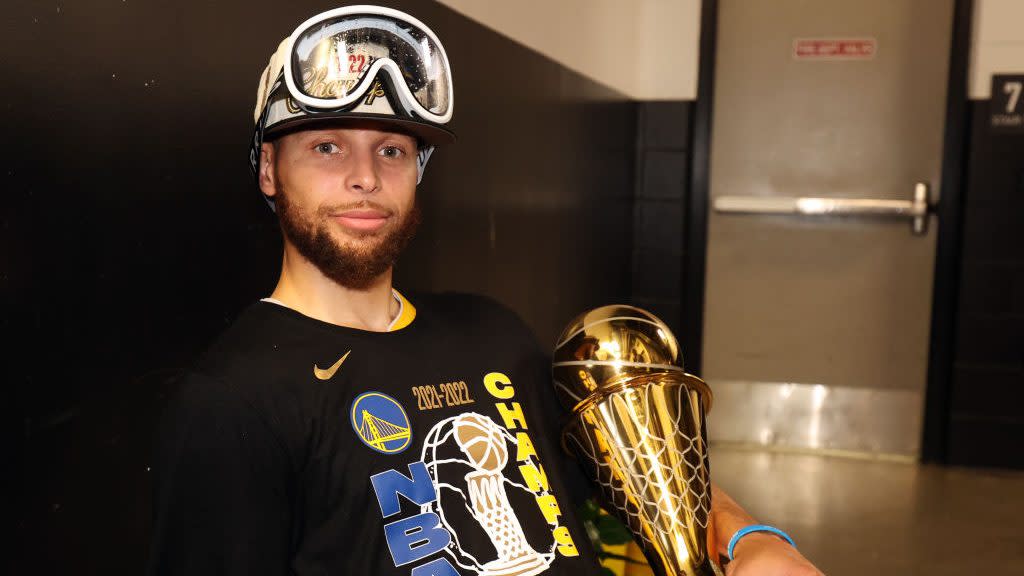 BOSTON – Before his standard post-game press conference, before recording an interview with ABC, before appearing on ESPN, before doing another interview where he shared headphones with the host, before joining NBA TV, before sitting down for another ABC/ESPN interview… Stephen Curry had about as private of a moment as a Finals MVP can have in the immediate aftermath of winning a championship. He sat in a folding chair in a hallway deep into the arena while waiting for Warriors coach Steve Kerr to finish at podium. Surrounded by “just” a few videographers/photographers and a couple other people, Curry couldn’t stop jabbering.

“This is amazing!” Curry shouted. “This is freaking amazing.”

“Aghgh,” he yelled from the back of his throat.

“Ahhh!” he yelled in a higher pitch.

He looked down in disbelief at the Bill Russell Trophy in his arms, noting how many Finals MVPs the Celtics legend would’ve won if the NBA presented the award back then.

He remarked how long these last few months have felt.

“This is different,” Curry said. “This hits different.”

“I went to Davidson!” Curry said. “I’m not even supposed to be here!”

Stephen Curry is unyielding. For seven of the last eight years, he has run literal circles around the NBA, cutting and weaving his way through screens to four titles, two MVPs (including the only one ever voted unanimously), an All-Star MVP and now – finally – an NBA Finals MVP.

Curry leaves Oscar Robertson as the greatest player never to win Finals MVP since the league introduced the award. (As Curry said, Bill Russell, whose titles predated the award, would’ve won more than a few.)

Maybe now we can focus more on what makes Curry great.

He’s the best shooter of all-time. While that’s frequently mentioned, it’s still not appreciated enough. Shooting is not some niche skill. It is the fundamental aspect of basketball.

Curry is elite at conditioning. He tirelessly zips around the court, leaving defenders in the dust if they take even a moment to catch their breath. That movement, coupled with his shooting, gives him incredible gravity and opens Golden State’s offense.

Curry is also a phenomenal teammate. That’s why the Warriors could integrate Kevin Durant and reach such great heights. It’s also why this older, less-talented version of the team still showed championship mettle. Curry sets such a great tone with his competitiveness and selflessness.

Asked how it felt to win Finals MVP, Curry slammed the table.

“Forget that!” Curry said. “We champs! Why you start with that question? We’ve got four championships!”

Though Curry doesn’t want to discuss it, his Finals MVP is transformational.

He’s the first non-forward, non-wing to win the award in 15 years. The narrative that small guards can’t dominate at this level is extinguished. Though Curry has a few more Finals duds than other players of his caliber (including Game 5 of this series), he was outstanding in five of six games in these Finals  – including 34 points, seven rebounds and seven assists in the clincher.

Curry soaked up this experience.

He hit a deep 3 and pointed to his finger, where he’ll make room for a fourth ring:

He put the series to bed:

And when it was time to accept his first Finals MVP trophy, Curry turned his head-nodding into rocking his whole body as if he were convulsing:

Curry’s energy is incredible. For the better part of a decade, he has taken on every responsibility necessary to achieve massive team and individual success. And he’s still coming.

More than two hours after Game 6 ended, Curry yelled “Thank you everybody!” and let out a loud scream as he headed into the night with his Finals MVP trophy and a legacy that keeps growing.

More on the Warriors