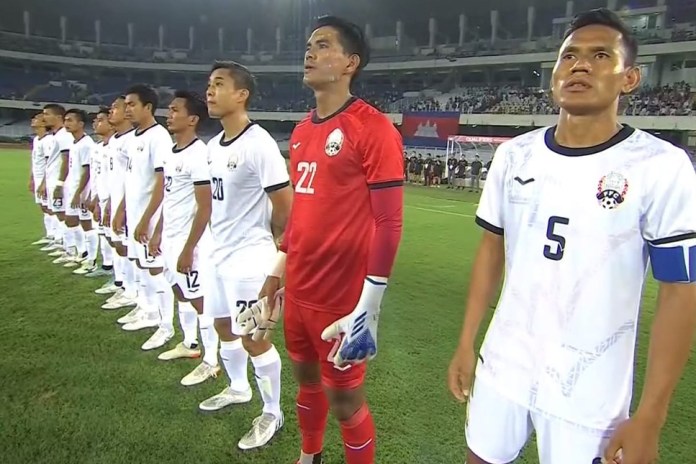 Initially, it was thought to be a blunder and mismanagement by the organizing committee and the stadium authorities. However, the issue was resolved after a while when the Cambodia flag banner was displayed on the giant screen and the anthem was played in the stadium.

It was later revealed that they have been an issue from the Football Federation of Cambodia. In an official letter sent by the AFC to the FFC (Football Federation of Cambodia), the AFC complained that the Cambodia flag produced did not match the required criteria. As a result, the previous Cambodian flag that was used for the last two years in AFC tournaments was used. This was the reason for the effective delay of the game.

Also Read: All you need to know about India in AFC Asian Cup Qualifiers

The Cambodian players and Keisuke Honda look confused as the Cambodian National anthem not being played despite being announced. #IndianFootball #ACQ2023 pic.twitter.com/XfcbVOKL3t

Mr. Shin Man Gil, the Deputy General Secretary of AFC sent an official statement to the FFC. The statement read, “It is regretful that the Cambodian flag produced for the Competition does not meet exact specification in terms of design ad color code.”

“Therefore, kindly be informed that the AFC will be using the graphic of the national flags on the giant screen for the upcoming matches in the Competition, as has been the practice for the last two (2) years in the AFC Competitions. Thank you for taking note and we look forward to your kind understanding on the matter.”

Following the commencement of the match, India took an early lead at the 14th-minute mark. Liston Colaco was brought down in the penalty box and the skipper made no mistake to slot it home.