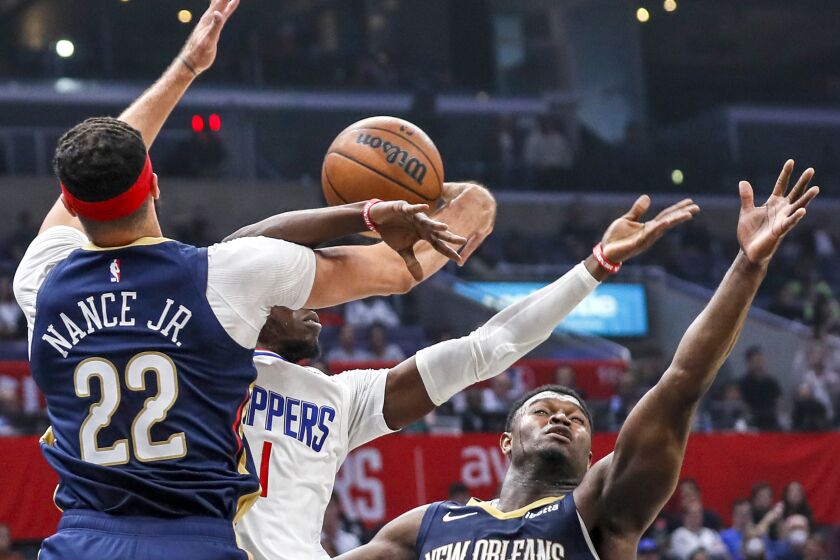 For too long, the Clippers have had a “wait ‘til next year” mindset. Wait for some player’s injury to heal, someone’s slump to pass, a young player to blossom.

This was supposed to be that elusive, championship-contending next year, with Kawhi Leonard returning from knee surgery to team again with Paul George as the tentpoles of a deep, productive offense and well-schooled defense.

The Clippers were a popular preseason pick to finish atop the West. Imagining them battling for a championship ring didn’t seem at all ridiculous, if they could avoid injuries.

Yet Leonard’s stiff knee has kept him out of the lineup more often than he has been in, a situation that’s expected to continue indefinitely. George, recently battling an upper respiratory ailment and admittedly slow to catch his breath, has been a shadow of himself. Both tentpoles have wobbled, taking the Clippers’ circus down with them.

Their 112-91 surrender to the energetic New Orleans Pelicans at Crypto.com Arena on Sunday was the Clippers’ fourth consecutive loss in a season that’s getting uglier by the day. They plunged to season lows in points and shooting percentage (41.9%). They made only 11 of 39 three-point attempts and scored merely 15 points in the third quarter, while Zion Williamson (21 points, 12 rebounds) and New Orleans ran off with a game that had been tied at halftime.

Last season, when they knew Leonard probably wouldn’t be able to contribute much, if at all, the Clippers compensated for his absence by coming up with a variety of offensive options. They were scrappy. They consistently battled.

That fire has been missing this season. They urgently need to get it blazing again, to stop playing meekly on defense and tentatively on offense and play up to the level they insist they’re capable of reaching.

The Clippers will be without Leonard for the fourth straight game and fifth time in seven games when they finish back-to-back games at home against Houston on Monday. His absence Sunday didn’t explain the Clippers’ poor shooting, their mental mistakes or their 15 turnovers.

“They’re a team that came in and shot the ball well from the three, general field goals, all around the court. There are teams that just shoot the ball well against us. We’re not playing defense that we need to be playing, and I think it’s carrying over offensively. We’re not getting anything out of it on the offensive end as well.”

It wasn’t so much that New Orleans shot well, or that Williamson was a force, or that CJ McCollum scored a game-high 22 points.

“It’s just too easy,” George said. “The games are too easy for the other team, and we’ve got to address that.”

George, carrying a cough as a lingering souvenir of his illness, scored 14 points on five-for-19 shooting, including two for eight from three-point range. He scored only 10 points in the finale of the Clippers’ two-game visit to Oklahoma City after having missed the first of those games while he was ill.

Leonard’s limitations when his knee permits him to play and the need to recalibrate the game plan when he must sit out loom as issues coach Tyronn Lue will juggle for a while. And those aren’t the only problems. “We’re not a very good basketball team right now,” Lue said, “and we’ve got to change that.”

“We’re trying to do something special here. At the end of the day, we all have to sacrifice. We all have to be better. We all have to hold each other accountable. The type of team we have, I know I keep saying it, we’re stacked, man. We have to buy in to the goal, and that’s trying to win the championship.

“There’s no way we should be losing to these teams. Regardless of how many games we play, who’s out, who’s not playing, there’s no excuse.”

This is one time that waiting ’til next year just won’t cut it.