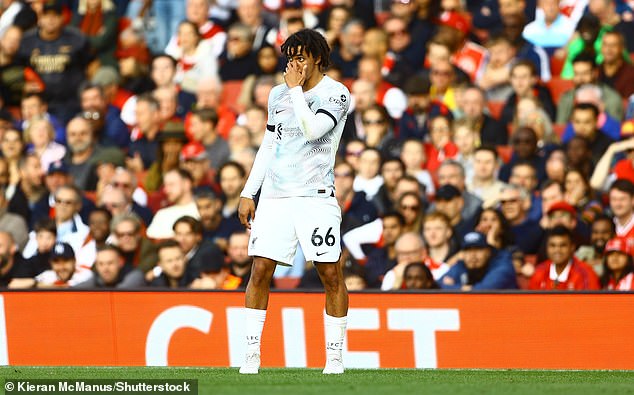 CHRIS SUTTON: Trent Alexander-Arnold’s defensive flaws were exposed in first half horror show – the Liverpool star was at fault for Arsenal’s first two goals before he was taken off after a poor display

By Chris Sutton For The Daily Mail

Trent Alexander-Arnold knows every time Liverpool concede, there will be critics looking at his involvement and that’s fair enough.

If you cannot be ultra-critical when analysing a potential England player at a World Cup then when can you?

For Gabriel Martinelli’s opening goal, Alexander-Arnold’s body shape was all wrong and he was done on the inside.

It was a great pass by Martin Odegaard but then any right back should know the movement Martinelli will make and try to stop that. He didn’t.

For Bukayo Saka’s goal, Alexander-Arnold bizarrely vacated his area by going across to close down Martinelli, despite Jordan Henderson having him covered.

That isolated Kostas Tsimikas, who was forced to cover Gabriel, leaving Saka all on his own at the back post. It is a split-second decision but it was the wrong one.

Alexander-Arnold was hooked at half-time. Liverpool may say that was because of injury. But it could easily have been for his below-par first-half performance. 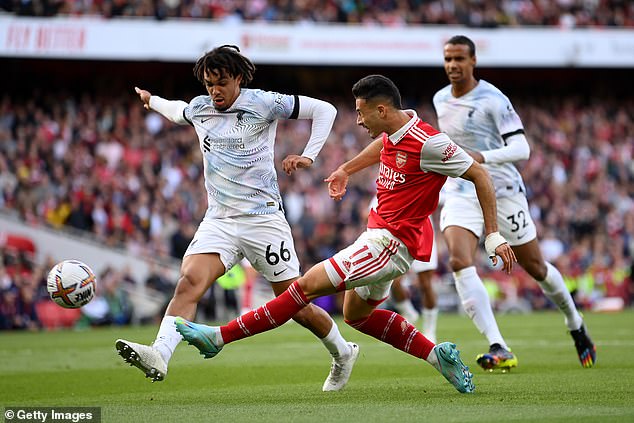 Alexander-Arnold played just 45 minutes at the Emirates, before being taken off with injury