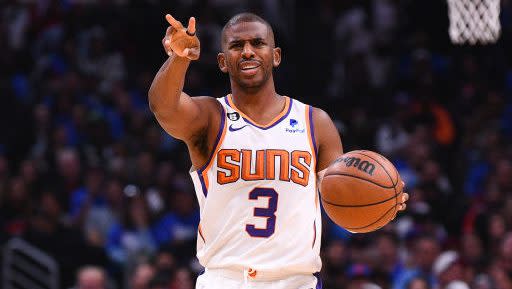 LOS ANGELES — It was fitting Chris Paul entered the history book in Los Angeles against a Clippers team where, years before, his passing — and especially the ability to throw lobs — became legend and a nickname for the team.

With a first-quarter lob to his current teammate, Deandre Ayton, Chris Paul became only the third player in NBA history with 11,000 assists, joining John Stockton and Jason Kidd.

“I honestly didn’t have a clue until I checked out of the game,” Paul said of breaking the record.

Ayton pumped his fist and was genuinely excited when a reporter told him after the game it was the lob he finished that was CP3’s 11,000th assist.

“It feels good to be a part of that,” Ayton said. “You see where the hard work goes and someone who I respect highly respect like that, you know, it’s good to see.”

“To be in a room with a guy like that he’s accomplished so much, it’s humbling to be straight…” Suns coach Monty Williams said of CP3. “And it’s amazing to see his teammates that happy for him. He gets embarrassed.”

Paul, in his 18th season, credited both his passion for learning the game and his teammates for getting him to this milestone.

“By just studying the game,” Paul said of how he got to 11,000. “And my teammates, man I’ve been fortunate to play for a while now with a lot of great shooters. They are great players and gentlemen. Started off with David West got a chance to play with Tyson Chandler, Peja Stojaković, came [to Los Angeles] to play with Blake Griffin, DJ [DeAndre Jordan], J.J. Redick and I could keep going. And now playing with [Devin Booker] and these guys. I’m privileged.”

Hitting the assists miles it in Los Angeles, where Paul lives in the offseason, meant his family was in the building — his brother, son, daughter, wife and others. And he set the record in front of fans who cheered his exploits for years.

But they weren’t cheering him Sunday as Paul and Phoenix — behind 35 points from Devin Booker — picked up the win over the Clippers. Still, those fans got to see a little history.

Check out more on the Suns