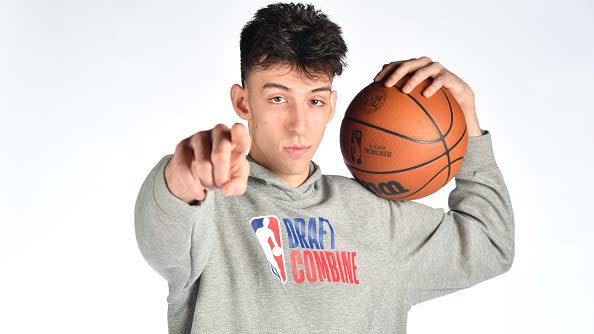 ORLANDO, Fla. (AP) — Gonzaga’s Chet Holmgren was wrapping up a multiday visit Friday with the Orlando Magic, who hold the No. 1 pick in next week’s NBA draft.

A person with knowledge of Holmgren’s visit said meetings, interviews and a dinner with team officials were all part of the process during his time with Orlando. The person spoke on condition of anonymity to The Associated Press because neither side publicly revealed specifics about the visit.

There are three players who are the clear frontrunners for the No. 1 pick; Holmgren, Auburn’s Jabari Smith and Duke’s Paolo Banchero. Smith worked out for the Magic last week. Banchero expects to meet with the Magic in the coming days.

Smith also met this week with Oklahoma City, spending parts of Sunday, Monday and Tuesday with the team that holds the No. 2 pick in Thursday’s draft. He worked out for the Thunder as well, and isn’t planning any other workouts – meaning he won’t work out for Houston, which holds the No. 3 selection.

See also  It was good, but we need to do it every night

Smith said he enjoyed the Thunder workout, but made no secret of his wish to be the No. 1 pick.

“It would mean a lot to me,” Smith told reporters. “A lot of great players have went No. 1. It would mean the world to me.”

Holmgren, Smith and Banchero have similarities. All are forwards, all at least 6-foot-10 (Holmgren is a 7-footer), and all played one year of college ball. Holmgren and Smith were second-team AP All-Americans this past season, Banchero a third-team selection.

The Magic taking a long look at Holmgren probably isn’t a surprise to another past Orlando star player. Memphis coach Penny Hardaway – the No. 3 pick by Golden State in 1993, before getting traded to the Magic – said as the college season was winding down that he got to know Holmgren well during the recruiting process, even while realizing that he was heading to Gonzaga instead.

See also  Kevin Durant on if the season put a strain on his friendship with Kyrie Irving: ‘Hell, no’

He raves about Holmgren’s potential.

“He’s all about competing, he’s about excellence, he’s tough. … I marvel,” said Hardaway, who spent his first six NBA seasons with the Magic. “You see a Kevin Garnett, handle the ball, shoot, make passes, and I’ve always loved his game. He’s just a terrific player. Every part of his game I love. He’s just a winner.”

More on the Magic