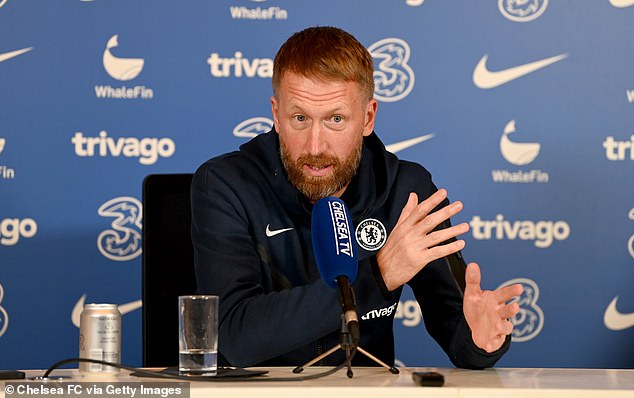 ‘It doesn’t discriminate with your status or how much money you earn’: Graham Potter opens up on the mental health challenges managers face as the Chelsea boss recalls how he had to deal with losing his parents during his early months in charge of Brighton

By Adrian Kajumba For The Daily Mail

Graham Potter opened up about the mental health challenges facing managers as he reflected on first learning about the intense scrutiny of life in the Premier League at Brighton.

Potter proved he can handle the increased exposure and managing in the Premier League as Brighton developed impressively under his stewardship but he also spoke candidly about the pressure managers are under.

‘Ultimately a little of what we are is bait for you guys,’ he said. ‘There is always somebody under pressure so there is a narrative there,’ he said.

‘You want to compare with the previous guy so there is always that going on. Which isn’t great for the mental health if you’re comparing, I would say generally. No-one can know the other context. You can only know yourself and your context so comparisons aren’t particularly healthy.

‘We are part of a sport where we create pressure. Somebody has to be under pressure.

‘Then one’s gone and it is on to the next. It was Steven Gerrard a few weeks ago and then it will be somebody else and then somebody else.

‘It is difficult in the world that we are living in to feel sorry for a Premier League manager, get me right, but mental health doesn’t really discriminate with your status or how much money you earn either, I would say.

‘It is just something to be aware of. It is a challenge and I think we all have to be mindful of that. I think you have to understand you do the job and there are things out of your control that you have to manage and you have to deal with.’

Potter also had to cope with the loss of both his parents, mother Val and father Steve, during his early months at Brighton.

An understandably emotional Potter recalled: ‘You’re going “ok I’ve got these feelings here that are powerful and raw” but then you’re also trying to compete in the Premier League.

‘So then you’re trying to manage “ok, am I getting angry or disappointed or frustrated or whatever the feelings are because of this or because of this?” 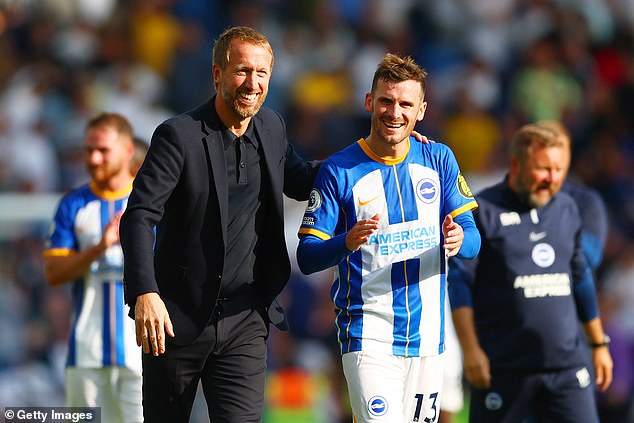 ‘That was the first six months of life in the Premier League and I think the quote is ‘you’re fixing the plane while it’s up in the air.’ That’s a great quote.

‘That’s also the challenge but you have to come through it and thankfully I was at a really good club that gave me support and help and we managed to stay on the path.’

Potter added: ‘My mum was suffering from dementia she was still alive but she wouldn’t have known [I was a Premier League manager]. So in the end it was nice for her not to suffer that.

‘My dad definitely [got to see me] – he came to the first game, to Watford. He just had a very short battle with cancer and six weeks later he wasn’t here – his last game was Liverpool away and then he wasn’t.

‘A lesson and a reminder to us all that life is precious and short, anything can happen and it puts things in perspective.

‘Of course I always think back to them now and they are with me all the time and whenever you stand at the San Siro, and you think “wow,” you know what I mean, they would just love to be there. They wouldn’t be able to contain themselves.

‘Excuse me I’m getting a little bit … but yeah that’s life and I am not the first person to lose parents and that’s part of life.’