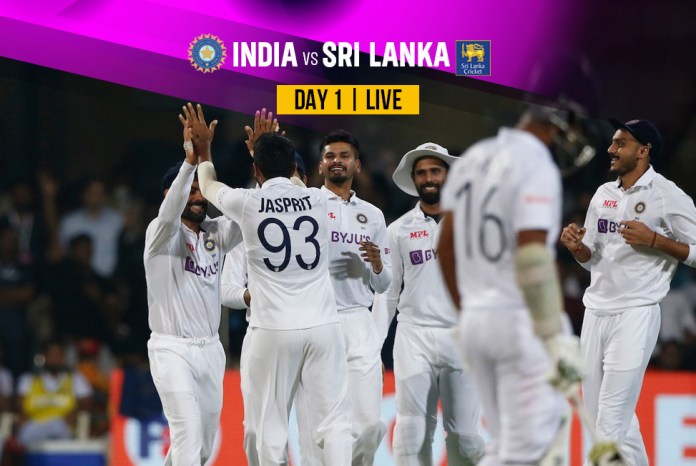 IND vs SL LIVE SCORE – Bengaluru Test LIVE Updates: Sri Lanka have got off to a horrendous start with the bat, chasing India’s first innings total of 252. The pace pair of Jasprit Bumrah and Mohammed Shami have sent the Lankans’ top four back to the pavilion. Follow INDIA vs SRI LANKA LIVE Updates with InsideSport.IN.

Earlier, Shreyas Iyer and Rishabh Pant made the most out of rank turner M Chinnaswamy pitch, helping India post 252 after opting to bat first. Sri Lankan spinners ruled the roost but Iyer and Pant scored at a brisk pace to keep the scorecard ticking.

Enter Rishabh Pant and Iyer mistook the pink-ball as white ball and played a T20 knock. Pant’s 27-ball 39 helped India take the fight back to Sri Lanka. However, his whirlwind knock didn’t last long as he was cleaned up by Lasith Embuldeniya off a sharp turning delivery.

But Shreyas Iyer continued his impressive form. He anchored the innings from one end and tried building partnerships with Ravichandran Ashwin. He too scored a record pace, bringing up his half-century with a six to steady India. However, he would be ruing missing out on a well-deserved century after falling on 92. Lasith Embuldeniya and Praveen Jayawickrama were the most successful Lankan bowlers with three wickets each.

Earlier, chasing a record second consecutive clean-sweep, Rohit Sharma won the toss and opted to bat first at the M Chinnaswamy Stadium in Bengaluru. Axar Patel made a comeback in place of Jayant Yadav.

As for Playing XI, India have made only one change. Axar Patel comes in place of Jayant Yadav. For Sri Lanka, there are two changes.

@13:30: Rohit Sharma wins toss and India will bat first. As predicted, Axar Patel comes back in place of Jayant Yadav.

@13:20: Pitch report: Russel Arnold says the pitch will have something for the spinners. Winning the toss and batting first would be key.

Together, set and ready to go ✅#TeamIndia | #INDvSL | @Paytm pic.twitter.com/nMgafaco3j

@13:10: It’s decision time. Who will get the nod? Mohd Siraj or Axar Patel? The pitch is dry and the cracks opening up could aid spinners.

@13:00: The trophy is here and Rohit Sharma will be eager to get his hands on that. He is on a hot winning streak.

The glistening 🏆 in all it’s glory! #TeamIndia | #INDvSL | @Paytm pic.twitter.com/X60i2JQH6a

How excited are you for the pink-ball Test! 👏 👏

Indian cricket team will attempt a SPECIAL RECORD during the 2nd test vs Sri Lanka in Bengaluru. India clean swept the West Indies 6-0 (3-0 in ODI & 3-0 in T20 Series). This was followed by 3-0 victory over the Lankan team in the 3 T20 match series. The winning streak continued for India in the Mohali test. Now if India can win the 2nd Test, India will not only win its 11th consecutive match but will clean sweep 2nd consecutive series for the 1st time in its entire cricket history.

IND vs SL 2nd Test – ROHIT Special Captaincy Record: Rohit just at the start of his captaincy stint has already started winning accolades. Be it cricket pundits or teammates all are singing the same tune about Rohit’s captaincy.

Also Read: IND vs SL LIVE: Ahead of Pink BALL Test, ‘Rockstar’ Ravindra Jadeja gets a new name, now he is ‘Mr Dependable’ of the Indian team, check why?

IND SL LIVE Streaming: How to watch the live streaming of the 2nd Test between India and Sri Lanka?

The live streaming of the 2ND Test between India and Sri Lanka will be available on the Disney+ Hotstar app and the website. You can also catch the live commentary, scorecard and latest updates here at InsideSport.IN