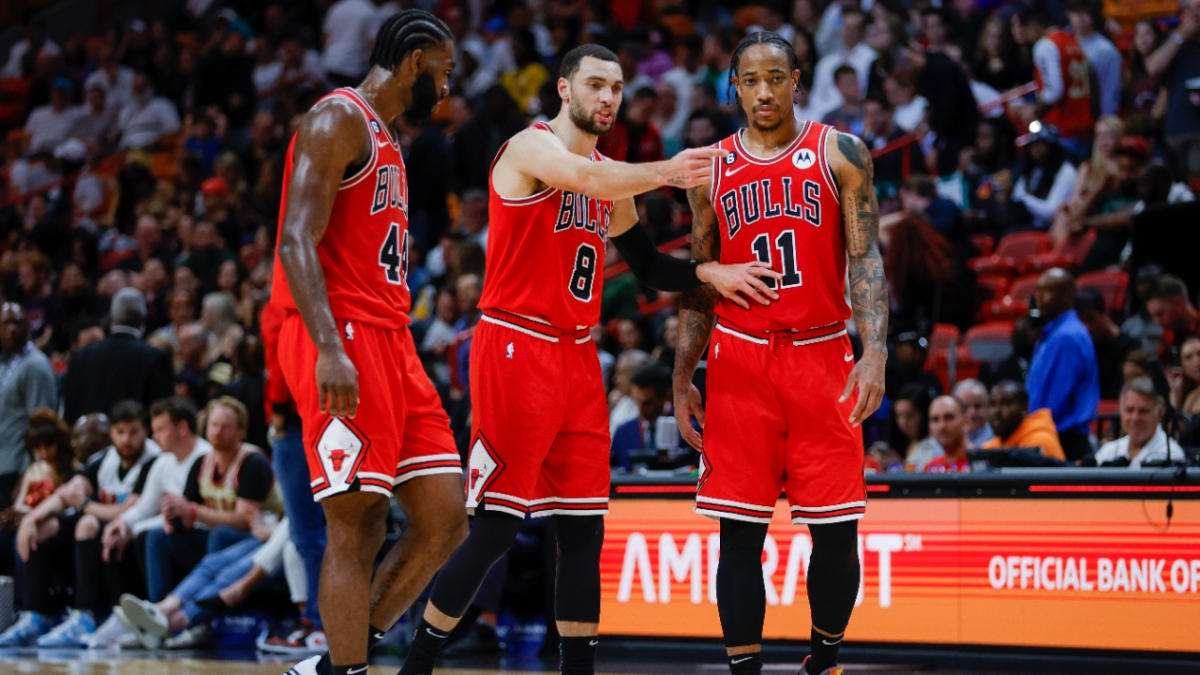 Underachieving teams often create negative headlines, and the Bulls experienced plenty of them before their 113-103 victory over the Jimmy Butler-less Miami Heat.

First came a report from The Athletic that stated Zach LaVine and the franchise aren’t seeing eye-to-eye and there is an on-court disconnect between LaVine and DeMar DeRozan. Then came two outlets, including NBC Sports Chicago, reporting on an intense halftime session during Sunday’s blowout loss to the Timberwolves in which players voiced collective frustrations — with some specific ones directed at plays involving LaVine.

Predictably, and eloquently, all the principals involved downplayed both situations.

“It’d be a problem if we didn’t have any type of aggressive confrontation,” DeRozan said. “It ain’t like nobody threw blows or chairs or anything like that. To have any type of confrontation is just a true sign of a competitor. When you want to win and things aren’t going right, a sense of frustration kicks in. You’re around aggressive nature all day. It gotta come out one way or another, especially when you’re struggling. That’s all that was.”

Added LaVine: “Something that happens all the time in our locker room. It happens. Multiple guys talking, multiple guys frustrated. That’s what’s supposed to happen, it’s a basketball team. Not the first time, not the last time. It’s just you (reporters) hear it. It’s nothing new to us.’’

And Nikola Vučević: “Nothing that happened was a big deal. I mean, if you’re in professional sports, you’re going to have arguments with your teammates. That’s part of it.”

The question, of course, is could such direct confrontation cut through the fabric of the team, leading to dissension or unhappiness? Particularly if more losing follows or heightened expectations aren’t met.

“If you’re sensitive and soft, yeah,” Vučević said. “But if you’re really about winning, if you really care about doing the right thing, then no.

“If something goes on and guys get to arguing, it comes from a good place. It’s never personal. I think guys are tough enough to take it and respond.”

Added DeRozan: “I think the teams that allow that to happen are ones that get caught up with the outside narrative. We know what’s going on, what we go through, how we feel, what’s said. You can’t let the outside people make it into something that it’s not and you start to pull away.”

And LaVine: “We’re in this together. Sometimes you need those conversations from top to bottom and you get through it. Everybody should be frustrated. I’m glad we got the win to try and get back on track.’’

LaVine, DeRozan and Vučević all played well in Tuesday’s victory.

LaVine engaged defensively and finished with 21 points and seven assists for a game-best plus-21. DeRozan finished with 24 points, five points and five assists. Vučević posted 29 points and 12 rebounds and was the beneficiary of several extra passes in which teammates took advantage of his mismatch.

The Bulls improved to 2-2 when their “Big Three” each score 20 or more points. And they’re now 6-1 against the Celtics, Bucks, Heat and Nets, perhaps a sign they can right the ship.

That’s still the overall franchise plan for now from a management team that has preached continuity since last season’s trade deadline. Obviously, that stance could change if matters continued to spiral in advance of this season’s Feb. 9 trade deadline.

“We’re the only people that can get us out of here,” LaVine said. “So if we don’t have the confidence to do that, I don’t know what we’re doing. I think we’re all here for a reason. We’re professional. We play for each other. And that’s what you got to do when you’re in a tough situation.”

In the first half of last season, DeRozan and LaVine played seamlessly together on their way to All-Star designations. They joked about the 2021 preseason headlines warning of a potential bad fit between their games.

But this season, they haven’t coalesced quite as smoothly on the court, a dynamic intensified by the team’s underachieving start. That start has produced multiple team meetings and several between just LaVine and DeRozan, which The Athletic first reported and a source confirmed.

Asked where their on-court partnership stands, DeRozan opted for his typical metaphorical answer.

“Every great relationship is a work in progress,” DeRozan said. “When you appreciate it and it’s something you want to be a part of, you gotta go through the good and the bad with it. It’s not necessarily the bad is a bad thing. It just comes with it.

“I’ve never seen nobody in a long-term relationship be all smiles and giggles every single day. Sometimes you gotta go through things and that makes that marriage even better at the end of the day. That’s all it is. It’s nothing too crazy.”

The players have a genuinely solid relationship off the court.

“You should’ve told them you egged my car,” DeRozan joked as reporters interviewed LaVine postgame. To which LaVine responded, “Or popcorned your car.”

But sources said DeRozan has occasionally been frustrated by LaVine’s decision-making.

“I’m fine with them,” LaVine said his on-court chemistry with DeRozan and Vučević. “I don’t think our chemistry has been a big issue.”

LaVine made clear, both publicly and privately, how stung he was earlier this season when Donovan benched him in crunch time of a home loss to the Magic. The fallout from that incident has only seemingly further emboldened LaVine, who has questioned his role at times.

Vučević offered his take on the Big Three’s chemistry.

LaVine always has downplayed questions about the expectations that come with the max contract he signed during the offseason. He did so again on Tuesday.

“There’s big responsibilities with everything. I hold myself to a standard, not on a contract, and I’ve done that since Day 1. Done that since I signed with the Bulls, entered the league,” LaVine said. “I think everybody puts a label on it, but not me. I go out there and compete for myself, my family, and my teammates.’’

There’s a simple solution to make all these negative questions and storylines to go away. Play connected basketball. Win more games.

The Bulls took a step in that direction on Tuesday.