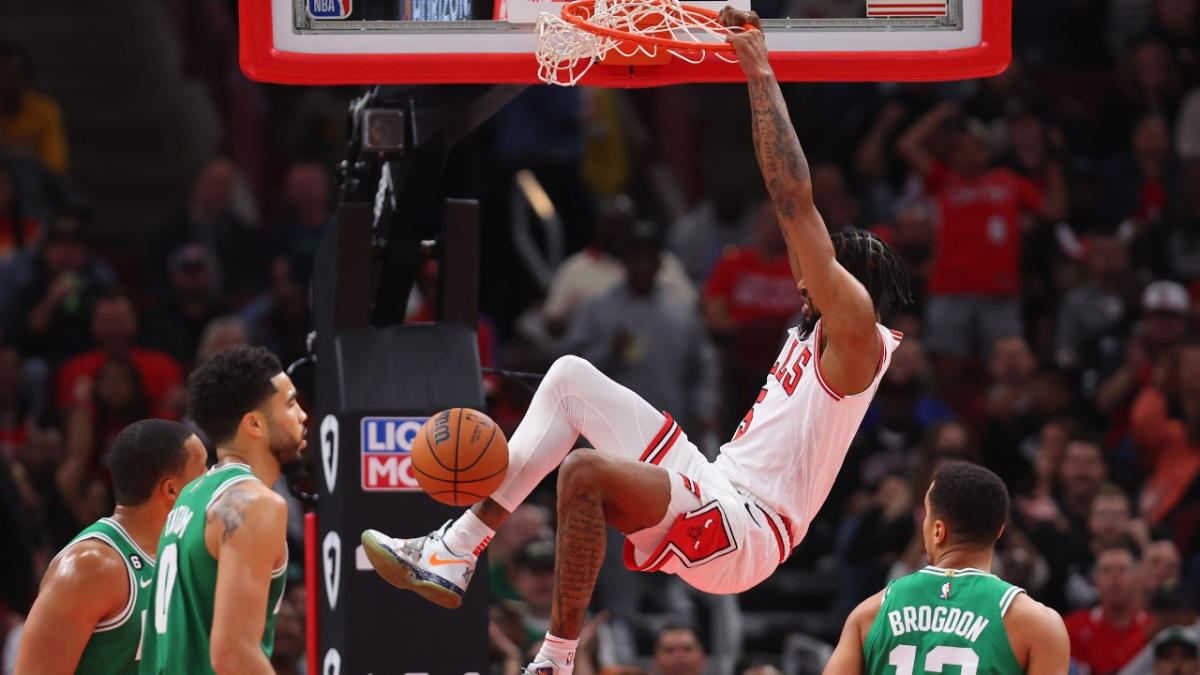 Derrick Jones Jr. lives life with an even keel.

Whether in the Chicago Bulls rotation or out of it, a line he has grown comfortable dancing in 14 months since being traded the team, his approach is day-by-day. But when called upon, more times than not, he has proven prepared.

The latest example came in Monday night’s stunning 120-102 comeback win over the Boston Celtics. After re-signing with the Bulls to a one-year, $3.3 million contract in the summer, which followed the team unsuccessfully pursuing Danilo Gallinari to fortify their wing rotation, Jones began the season out of Billy Donovan’s 10-man rotation. But for the second game in a row, the springy forward made the most of second quarter minutes, sparking a second unit surge that flipped the momentum of the game in the Bulls’ favor.

“It’s always great being out there with the guys. I love being here and I love playing with them,” Jones Jr. said with a smile. “Every moment I’m on the floor I cherish it. I’m just glad to be out there.”

He played like it Monday, slashing his way to 10 points — four coming via dunk, six coming via free throw — in an impactful eight minute stint that saw the Bulls vault from behind by nine points to ahead by seven. His defensive activity, too, fit right in with a unit that held Boston to 15 points in the second quarter after allowing 39 in the first.

“We just played hard,” Jones Jr. said of that group, which featured Alex Caruso, Goran Dragić, Andre Drummond and, late in the first quarter, Javonte Green. “We just started playing a lot more physical, getting our hands on balls, getting a lot of deflections, and just trying to be disruptive on defense.”

Add that to his 8 point, 2 steal performance that served as a bright spot of Saturday’s blowout loss to Cleveland, and Jones is putting together a case for an expanded role, especially given the in-flux state of the Bulls’ power forward position.

See also  Jae'Sean Tate with an assist vs the Miami Heat

Against the Celtics, Jones Jr. played 14 minutes, 45 seconds, a shade under Green’s 16 minutes 36 seconds, but more than the 12 minutes, 33 seconds Patrick Williams logged before checking in for mop-up duty. Williams started each half, but did not return (until the last moments of the fourth) after each of his first stints, instead giving way to Green and Jones Jr.

It speaks to the juggling routine Donovan is undergoing early in the season, and with 11 players capable of contributing. Jones is one of them.

“I’ve been through this many times throughout my career,” he said of not getting minutes to start the season. “It’s not the first time. I’m good.”

But, asked how he stays ready for the next opportunity?

Green, a close friend of Jones, lauded that quality.

“Derrick’s got a good soul, man,” Green said. “If he don’t play, either way he’s still gonna bring that same energy that he have. And you gonna feel it even if he’s not playing.

“You can just feel his energy, so we know he’s gonna be ready whenever his number is called anyway. Just a good feeling to have that trust in him.”

Donovan has been searching for that, especially with Lonzo Ball sidelined, Caruso’s minutes being monitored carefully, and the Bulls at times prone to slow starts and defensive lapses. Could Jones be part of the solution moving forward?

“It’s just day by day,” Jones said of his role moving forward. “Whenever I get out there, I just do whatever I can to stay out there. That’s just my main goal. When I’m on the floor, be as productive and make as many winning plays as I can to stay on the floor.”