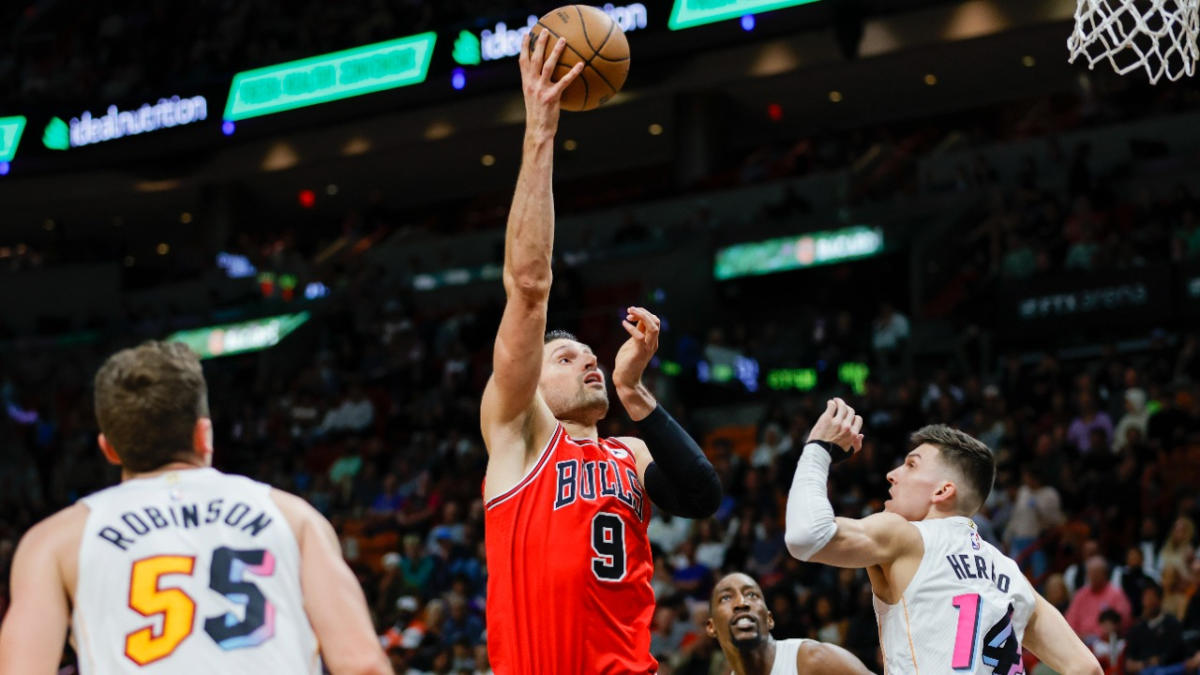 One win over a shorthanded Miami Heat squad will not cure all that ails the Chicago Bulls.

But for a team that has seen plenty of dark clouds begin to circle over its heads amid a four-game losing streak, Tuesday’s 113-103 victory — which moved the Bulls to 12-18 on the season — is a good start, if nothing else.

Here are 10 observations from a contest that seemed to carry more weight than a typical mid-December regular season game:

1. These two teams entered play trending in opposite directions. The Heat had won four straight games to pull their season-long record to 16-15, while the Bulls had dropped four straight and seven of nine to fall to 11-18.

But the Bulls had an availability edge. While Javonte Green missed his second straight game with knee soreness, Miami played without three starters in Jimmy Butler, Kyle Lowry and Caleb Martin, plus a key reserve in Gabe Vincent who has torched the Bulls in the past. All of which is to say: This is not a game the Bulls could afford to lose.

2. After a day in which reports surfaced of a disconnect between Zach LaVine and the Bulls’ front office (via The Athletic), and a “strong exchange” in the Bulls’ locker room at halftime Sunday’s loss to the Minnesota Timberwolves centered on defensive breakdowns involving LaVine (via NBC Sports Chicago), all eyes were on how the two-time All-Star would respond in this one.

And respond he did.

LaVine opened the game by scoring 11 points, shooting 3-for-4 from 3-point range and supplying active defense on-the-ball and in help rotations in the first quarter.

The defensive dynamic continued throughout. And although LaVine finished with 21 points, he did so within the flow of the Bulls’ offense, shooting 7-for-13 from the field, 3-for-8 from 3-point range and handing out seven assists. With the exception of two heat-checks at the end of the first quarter (which he earned by starting hot), he kept the ball moving and was in the right place defensively more times than not — neither of which had been enduring truths 29 games into the season.

His game-high +21 plus-minus was earned.

3. The Bulls’ defense, in general, got off to a much sharper start than the listless effort against Minnesota in which they allowed 150 points in regulation for the first time since 1982. Although the Heat missed some clean 3-point looks, the Bulls’ help rotations were much crisper and their presence on the ball was more active. They held the Heat to 21 points, 8-for-22 shooting and four turnovers in the first, good enough to carry a 10-point lead into the second.

4. Then, the wheels fell off for a spell. The Heat won the opening 6:25 of the second quarter 17-4, holding the Bulls scoreless for the first 3:58 of the period and scoring eight points off four turnovers. The Bulls’ shotmaking regressed, but they were also careless with the basketball; by halftime, Patrick Williams (three), Nikola Vučević (three) and LaVine (two) all had multiple giveaways.

Behind much improved shooting (Tyler Herro scored 11 points and made two 3-pointers, while Duncan Robinson made three triples), Miami won the second quarter 36-21 to lead 57-52 at the break.

5. The Bulls responded to that, though, by dominating the meat of the third quarter. After a Herro 3-pointer put the Heat ahead 60-52, the Bulls went on a 30-7 run between the 11:23 and 4:14 marks of the period to take as much as a 15-point lead. That stretch featured more highly active defense (they scored 21 points off 13 Miami turnovers for the game) and intentional ball movement on offense, encouraging responses to the type of adversity that has caused the Bulls to wilt of late.

6. Since the assembly of this core, none of the Bulls’ three star centerpieces has sacrificed more than Vučević. So it felt significant that one game after Goran Dragić implored the team to play for each other and sacrifice, Vučević led the squad in shot attempts with 17.

Better yet, Vučević made good use of that opportunity by posting a season-high 29 points (13-for-17 shooting, 3-for-5 from 3-point range) to go along with 12 rebounds.

With a few exceptions in the second quarter, Vučević’s teammates were clearly focused getting him the ball when faced with a post mismatch, which presented often against the Heat’s switch-heavy scheme. Vučević scored the Bulls’ first eight points of the game and nine in the third quarter, frequently burrowing inside for buckets over smaller defenders; eventually, that scoring led to increased defensive attention that opened up clean looks for his teammates.

And to cap it off, Vučević re-entered in the fourth to knock down a pair of 3-pointers that helped close the game out.

7. The second of those 3-pointers featured another significant moment: With the shot clock winding down, LaVine caught a pass from Williams on the left wing and quickly drove against a bent Miami defense. When Herro slid over from the corner to help LaVine’s defender (Robinson), LaVine deftly kicked to an open Vučević in the corner instead of forcing up a contested look — as he did to Dragić’s frustration during the Timberwolves game.

That spoke to the healthy balance the Bulls’ “Big Three” found in this one. For just the fourth time this season, all three of DeMar DeRozan, LaVine and Vučević scored 20-plus points, and they did it with similar shot diets. DeRozan went 9-for-14 from the field for his 24 points, while Vučević took 17 shots and LaVine took 13. Each rode their respective hot hands for stretches, but none highjacked the offense for too long of stretches during the game, keeping the others involved.

White, of course, supplied some sparkplug scoring by draining three 3-pointers in the first half and finishing with 14 points (although he finished 3-for-10 from the field). He also continued a trend of his fourth season by hustling his tail off at the defensive end, which the Bulls need consistently as they look to pull themselves from their current rut.

Caruso, meanwhile, generated a handful of extra possessions for the Bulls with three steals and an offensive rebound, plus shot a perfect 2-for-2 from the field and free throw line for seven points. He set his typical tone.

9. Andre Drummond was on his way to a third straight DNP before Derrick Jones Jr. suffered a sprained ankle in the third quarter and did not return. Drummond has been on the outside looking in of the Bulls’ rotation as Donovan has turned to small-ball reserve lineups of late, but if Green and/or Jones Jr.’s absences extend, he could find himself with a role again (he played seven second-half minutes in this one).

And although Ayo Dosunmu has not fallen so far out of favor as to not play entirely, he also appears to have slid below White, Caruso and Dragić in a crowded guard rotation after beginning the season as the team’s starting point guard. Dosunmu logged five minutes in this one, while Caruso and Dragić closed and White played 24.

10. This was a significant win for the Bulls because of its underlying factors — strong defense, their “Big Three” achieving balance, etc. — and the adversity that preceded it. But it should also be acknowledged that this Heat team was extremely shorthanded, and that the Bulls’ greatest challenge is not merely snapping a four-game losing streak with one win, but sustaining the habits they exhibited Tuesday on a consistent basis moving forward.

The next opportunity to do just that: At the Atlanta Hawks for the second leg of a back-to-back on Wednesday.