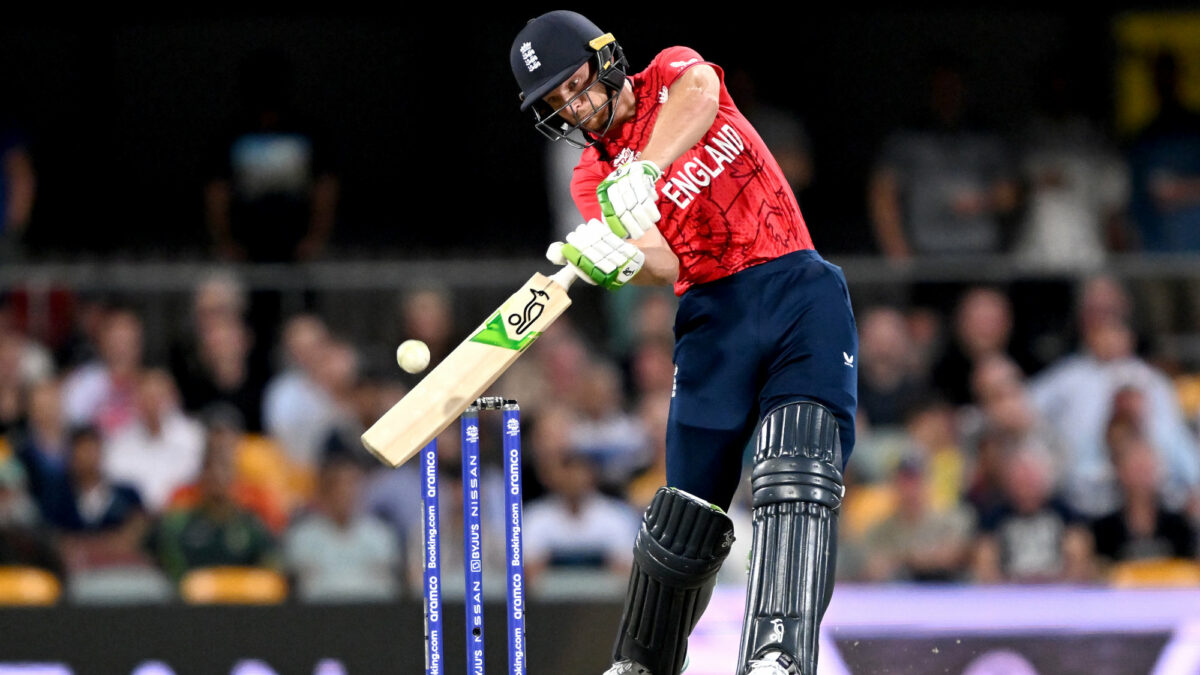 Australia’s World Cup title defence is hanging by a thread after England held off a charging Glenn Phillips to defeat New Zealand by 20 runs at the Gabba.

Needing to win to match the Aussies on points, an 81-run opening partnership from captain Jos Buttler (73) and Alex Hales (52) gave England the upper hand from the outset, and despite some tremendous striking from the in-form Phillips (62), they held their nerve at the death, with wily bowling from Sam Curran and Chris Woakes turning the screws at the crucial point.

See also  Once Virat Kohli, Steve Smith Bounce Back Then They Will Overtake Joe Root

The Black Caps were left to rue a costly drop from Daryl Mitchell to spare Buttler on 40; though to be fair, England themselves had put down an even worse miss when Moeen Ali shelled Phillips on 14.

Of consolation for New Zealand is that the win was narrow enough to avoid denting their impressive net run rate (+2.24), meaning they need only take care of business against Ireland in their final group stage game on Friday to ensure top spot in Group 1.

Meanwhile, England gave theirs a badly needed boost: now at +0.55, it’s clear enough of Australia (-0.30) to leave nothing short of a gargantuan Aussie win at the Adelaide Oval – somewhere in the vicinity of 100 runs – would give them a prayer should Sri Lanka not cause an upset.

“You don’t become a bad team overnight,” Buttler, who overtook his predecessor as captain Eoin Morgan as England’s highest T20I run-scorer mid-game, said of his team’s bounce-back, having been shocked by Ireland in their last match at the tournament last week.

“We had a poor performance, but we’ve got some great players in our line-up, some really dangerous players, lots of confidence still in the group.

“It’s quite a ruthless tournament… it’s tough to get through. But we know that everything’s in our hands.

“With our line-up, we bat deep, it allows you to maybe take it on an over earlier than you might do otherwise.”

With 44 runs combined across England’s two completed World Cup games heading in, a lift was needed from Buttler and Hales at the top of the order – and lift they did.

From the moment a booming Hales drive off Tim Southee in the opening over took an inside edge, whizzed past the stumps and to the fine leg boundary for four, the English blaster’s luck had turned. By Southee’s next over, Hales’ eye was in enough to club him to the mid-wicket boundary for four, the first shot fired in a PowerPlay onslaught.

Buttler was rarely required to face a ball – he’d see just 11 in the first six overs – as Hales took control, dismantling the usually reliable Southee for a six and two fours in a 15-run fifth over.

An early flashpoint came when Williamson moved brilliantly to claim a diving catch to remove te England captain; but replays quickly proved the ball had bounced obviously enough to leave many questioning how he could possibly have been unaware to it.

A trademark Buttler scoop off the pacy Lockie Ferguson in the next over was the first sign of intent from Buttler to match Hales, the pair setting England up perfectly with an 81-run opening partnership off 10 overs and change.

Hales’ wicket, stumped off Mitchell Santner for a well-compiled 50, only saw Buttler up the tempo, with help from a shocking drop from Daryl Mitchell in the deep to cost Ferguson his wicket.

His next two balls went like tracer bullets to first the straight and then the mid-wicket boundaries; remarkably, despite a sedate start, Buttler’s half-century took 35 balls compared to Hales’ 39. 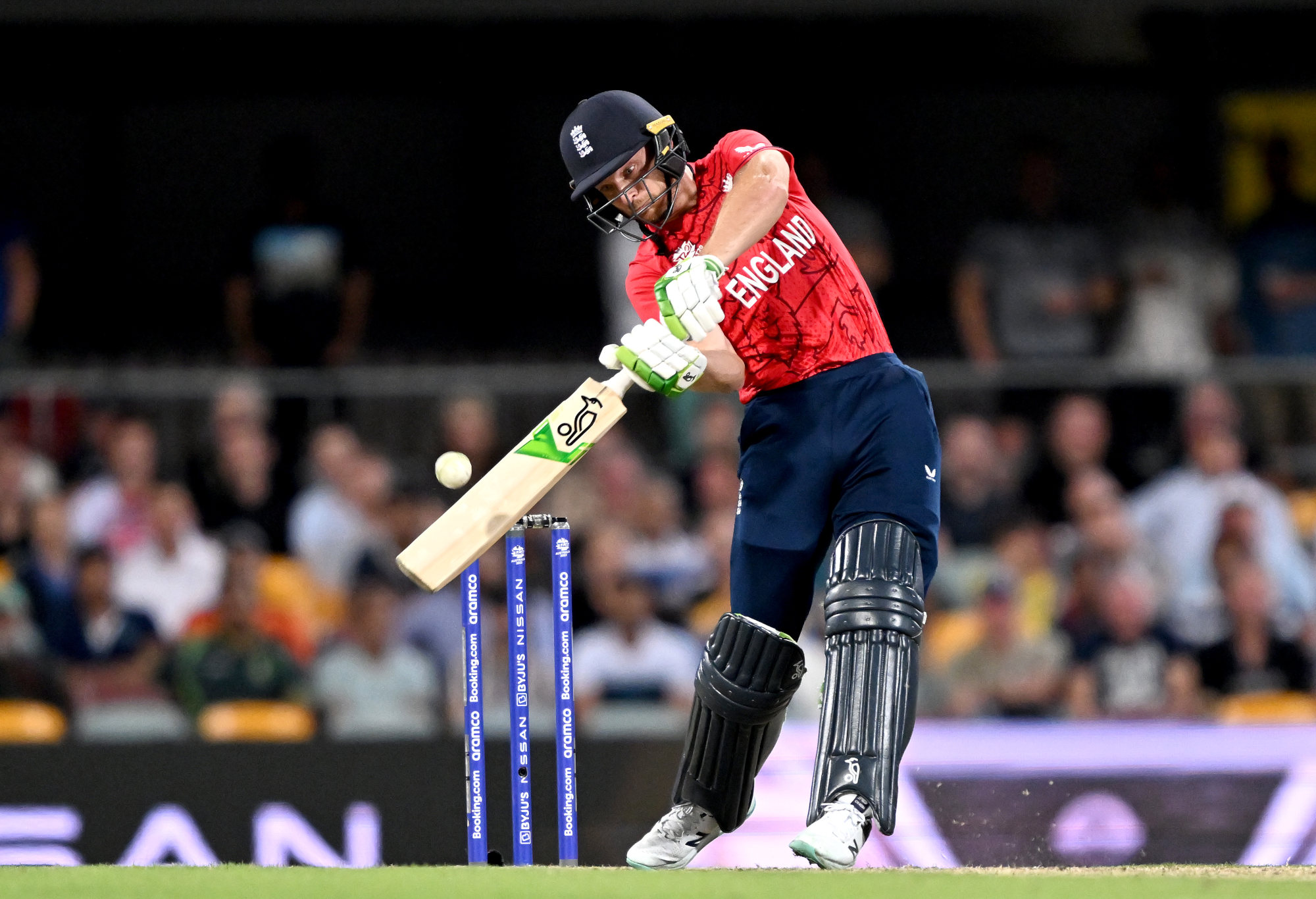 Jos Buttler of England hits the ball for a four. (Photo by Bradley Kanaris/Getty Images)

But aside from his opening partner, no other Englishman could stay the distance with the captain to ensure a monstrous total. Liam Livingstone’s dismissal, bowled by Ferguson attempting an uncharacteristic lap sweep for the second ball in a row, signalled the end of England’s onslaught, a tame end to the innings keeping the Black Caps in the game.

Southee recovered from the earlier onslaught to hold his nerve at the death, also doing brilliantly to take a difficult Williamson throw and run out Buttler at last for 73. Only a free-swinging Sam Curran, casually lifting Boult for six in the final over then helping scamper an unlikely three off the last ball thanks to a Santner misfield, got England as high as 6/179, when 200 had seemed a shout halfway through the innings.

Still, the Black Caps had their work cut out for them on a pitch with enough life in it to give bowlers some reward for toil. The task, though, became even tougher when Devon Conway gloved Chris Woakes to a diving Buttler down the legside for his second straight low score after his brilliance against Australia in the opener.

England were well on top when the explosive Finn Allen fell shortly after trying to up the tempo near the end of the PowerPlay, heaving Curran to Stokes in the deep; at that point, the Poms’ biggest concern seemed to be the all-rounder damaging his vulnerable index finger in the process.

Indeed, when Phillips skewed a drive high into the covers off Adil Rashid, the match was all over bar the shouting, only for Moeen Ali to take the simplest of chances far too casually, spilling the sitter to end all sitters.

On 15 at the time, Phillips proved against Sri Lanka he’s a bad man to drop: he’d reach his 50 off just 25 balls, adding insult to injury by plowing Rashid for two mighty sixes over cow corner along the way.

Williamson, the ice to Phillips’ fire, reached 40 before slicing Stokes to Rashid at short third man, who did as Ali couldn’t by clinging to the chance.

Advantage England again, especially when noted hitter Jimmy Neesham lasted just three balls before departing attempting to heave the speedy Mark Wood over the long boundary at the Gabba, falling 20 metres short and into the clutches of Curran.

With the ask 54 off 24 balls, Phillips appeared New Zealand’s sole, slim hope: but they had, after all, chased down 57 from the final four (and with an over to spare) in last year’s World Cup semi-final.

That time, Mitchell was the hero with some nerveless ball-striking; this time, though, he’d muster only three, caught on the boundary as Woakes came up clutch with a splendid fourth-last over. 49 off three.

When Phillips followed suit, mistiming Curran to the safe hands of Jordan at long-on, England rejoiced.

The best efforts of Santner and Ish Sodhi at the death were for nought; 40 runs off the final two overs was never attainable for the lower order. Some heavy Santner striking brought it back to a 20-run loss; enough for the Black Caps to shake off and hope to rebound from, but the worst possible result for Australia.