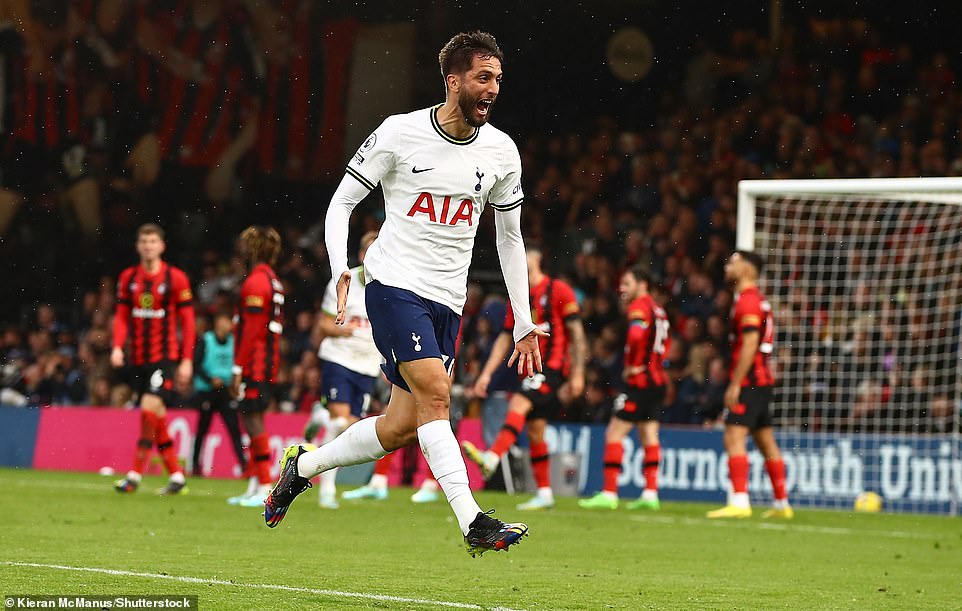 When Emerson Royal’s shot flew out of the Vitality Stadium, going clean over the Steve Fletcher Stand and into the car park, the Tottenham supporters sang: ‘What the f***ing hell was that?’

Not an unfair question from the fans. They could even have been asking it of Tottenham’s entire performance as an uninspiring display led them towards a third straight Premier League defeat.

Yet at 2-0 down, a switch was flicked. Tottenham turned into something that resembled a top-four team for the final half hour and won 3-2, a stoppage-time winner completing the turnaround.

Ugly or not, Antonio Conte was content. So were the supporters. Not since November 2010 had they seen their side come back from two goals down to win away from home and by full time, they were singing ‘Antonio’ on repeat. 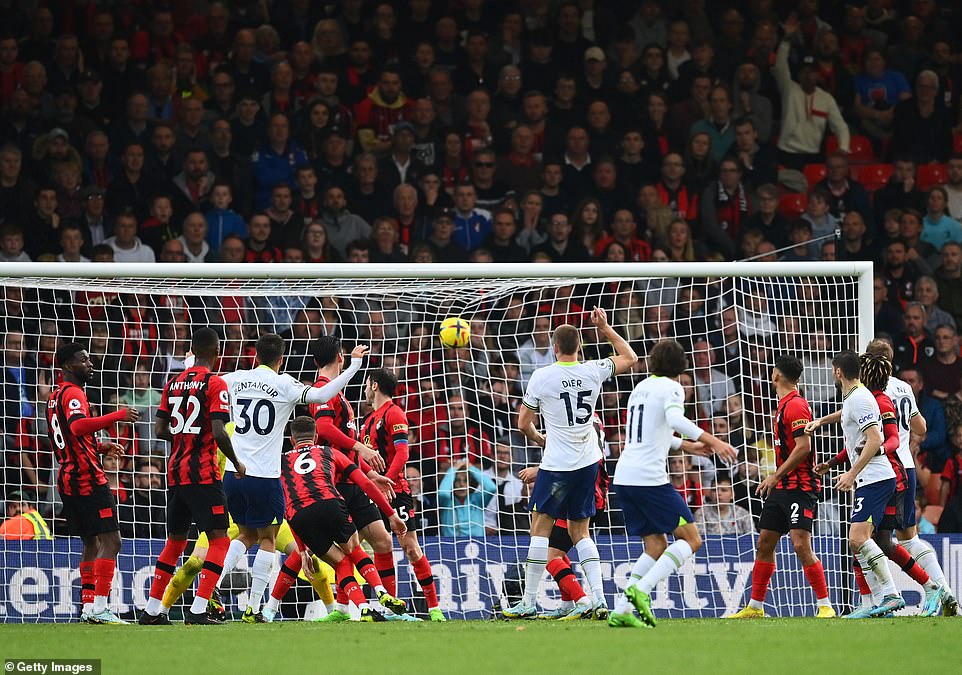 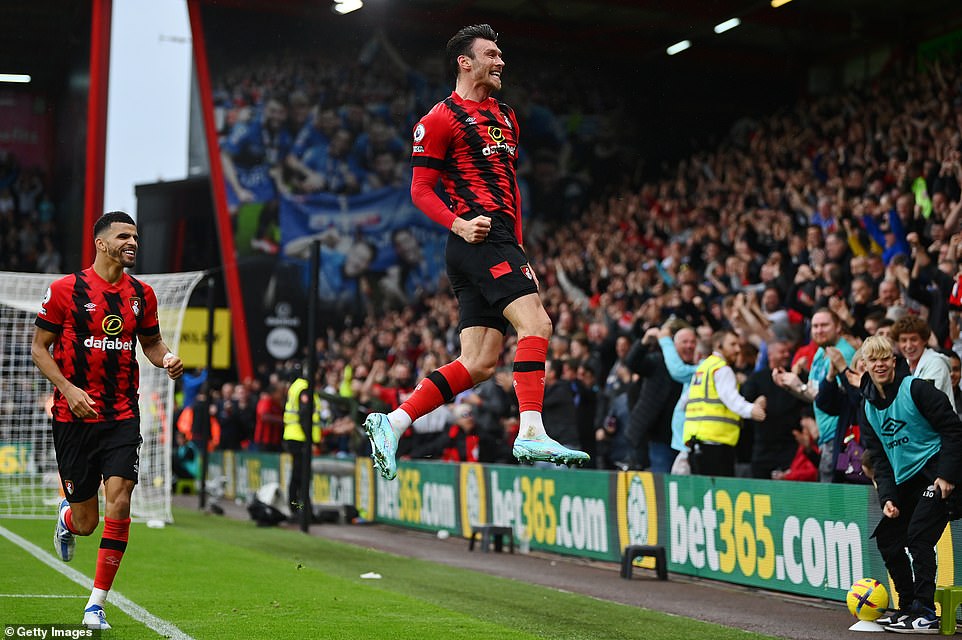 Ryan Sessegnon kickstarted the comeback with a tidy finish from a tight angle. Ben Davies scored their second goal, heading home Ivan Perisic’s ball to the back post. Finally, Rodrigo Bentancur struck the stoppage-time winner from Tottenham’s 19th corner of the match.

Bournemouth left bitterly disappointed, naturally. ‘They put everything in and got nothing out,’ caretaker Gary O’Neil said afterwards. Kieffer Moore’s two goals were well taken but according to Conte, once Tottenham’s players turned ‘nasty’ in the second half, there was no stopping them.

There was no Bentancur and no Eric Dier in the visitors’ starting line up, the latter benched for the first time this season. Conte made those calls with a view to Tuesday’s trip to Marseille – a match they cannot lose, otherwise it’s curtains for them in the Champions League.

Eight games in October had taken its toll on Tottenham. Harry Kane had played 718 minutes in that period – more than any other Premier League outfield player in all competitions. Dier followed on 700 minutes, and Bentancur on 695.

Kane is Tottenham’s undroppable. We know that. But Conte wanted to manage Dier and Bentancur’s minutes and dropped them for game No 9 of the month. A risk? Certainly, but one Conte felt was worth taking.

Before a ball was kicked, we would find out which walkout song had been chosen. Since January 2020, Bournemouth’s players had walked out to Kanye West’s song ‘Power’. But the club have taken the decision to ditch the tune due to the rapper’s anti-semitic comments. Instead the two sides strutted out to ‘Seven Nation Army’ by The White Stripes.

Tottenham looked more like The White Tripes in the opening exchanges as Bournemouth took control of this match. Two minutes in, Moore sent a header on to the roof of the net from Lewis Cook’s corner. A minute later, Marcus Tavernier forced goalkeeper Hugo Lloris into a low save.

Some critics say Tottenham’s 3-5-2 set-up is unambitious of Conte. No one knows the system better than the Italian but 20 minutes in, Bournemouth goalkeeper Mark Travers, starting his first game since shipping nine goals to Liverpool at Anfield, had yet to be tested.

In the 23rd minute, Bournemouth led 1-0. It started with excellent hold-up play from Dominic Solanke, who passed the ball in behind for the lively Tavernier to collect.

Tavernier squared the ball to Moore. With a first-time finish, he found the bottom right corner beyond the diving Lloris, and Bournemouth had a deserved lead.

After losses to Manchester United and Newcastle, Tottenham were now staring at a third successive defeat if they didn’t get their act together. Their first shot on target arrived in the 36th minute when Oliver Skipp forced Travers into a near-post save. 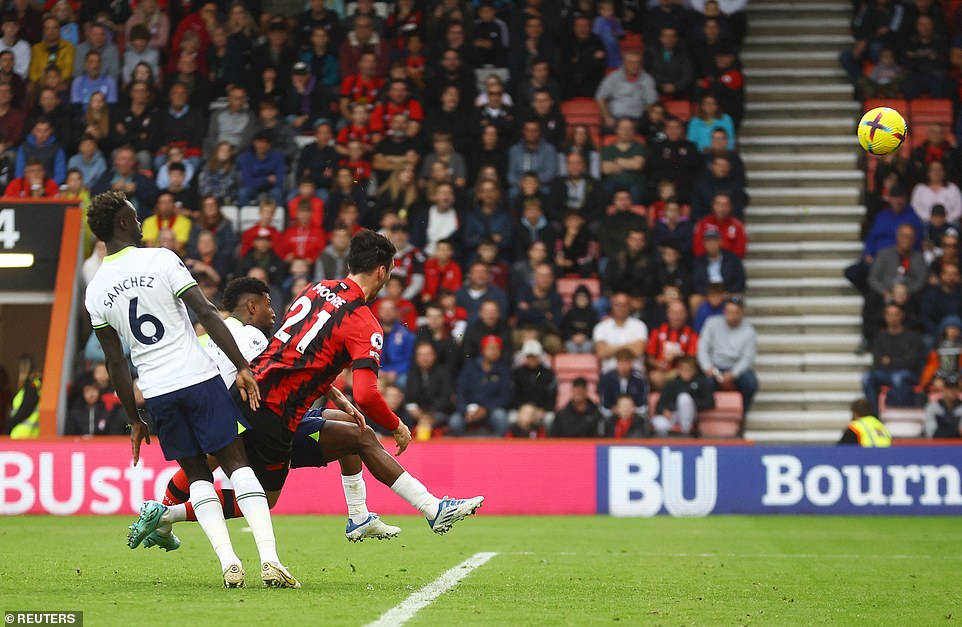 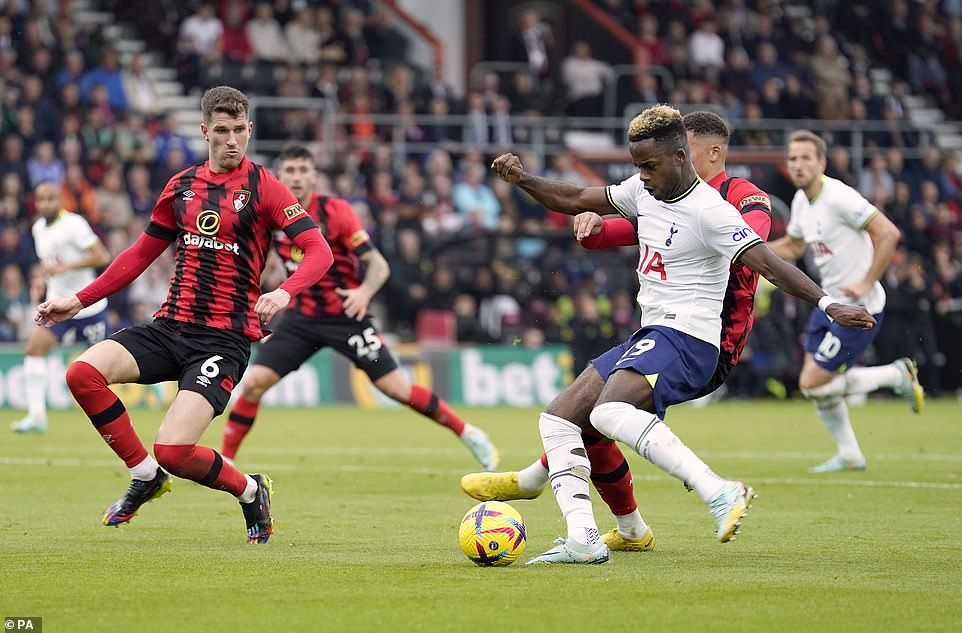 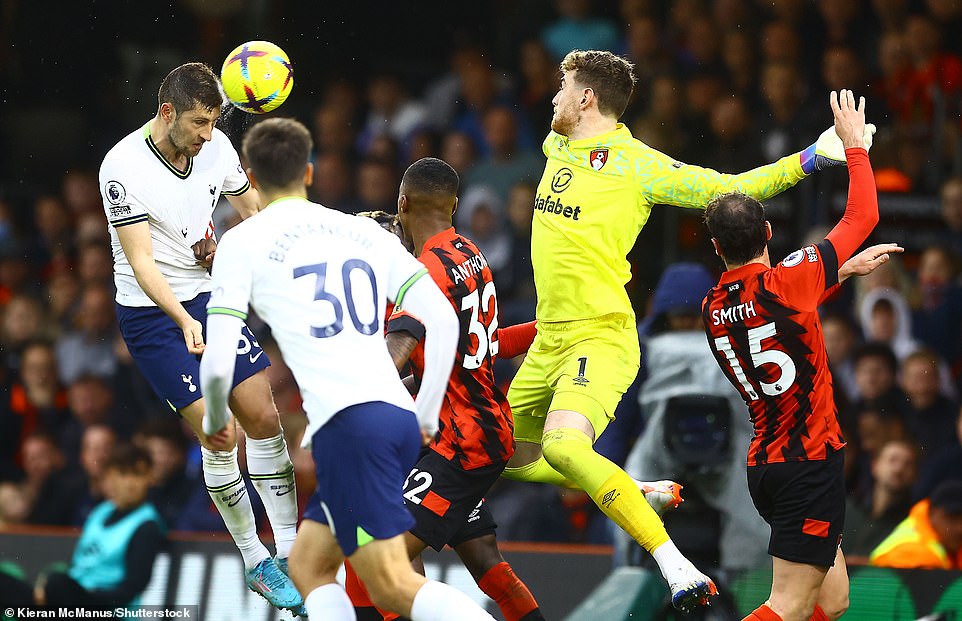 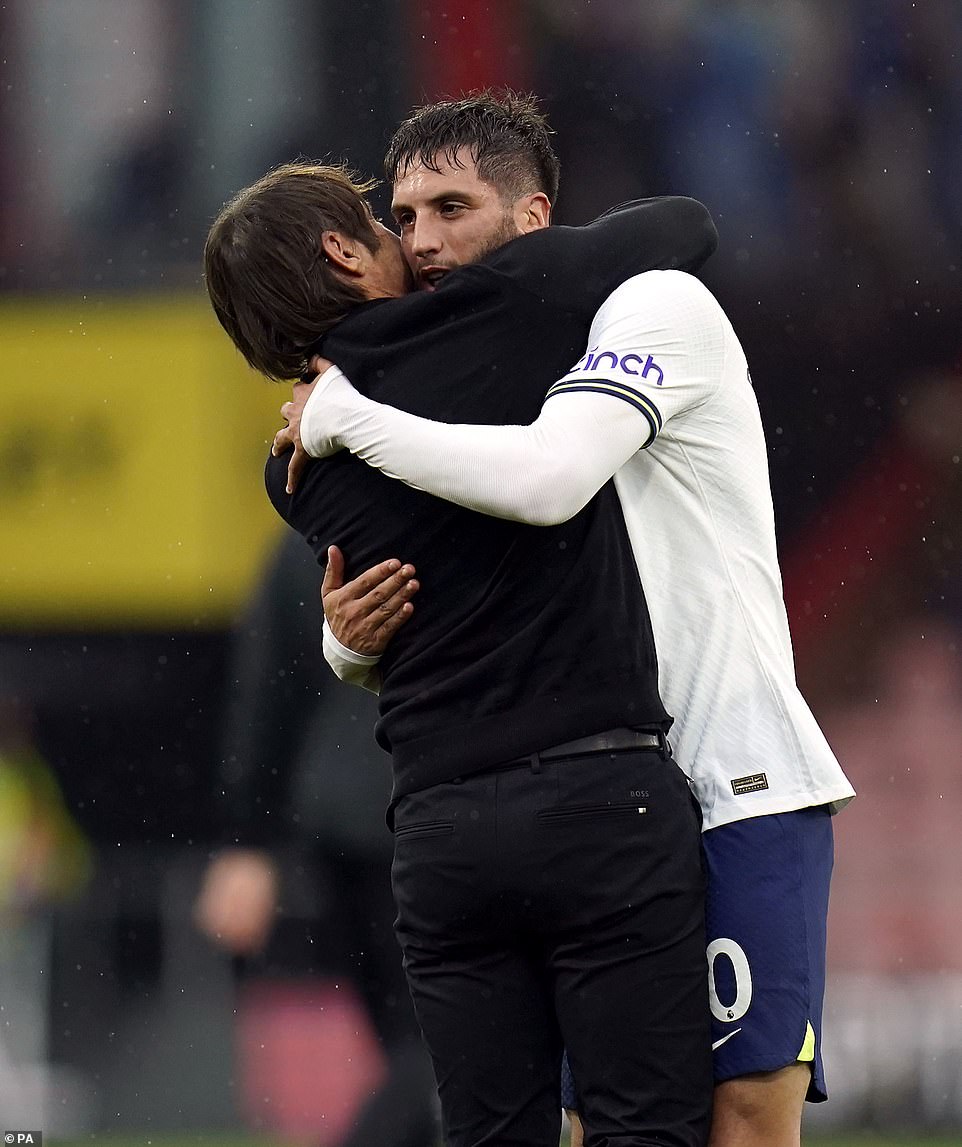 The closest Tottenham came to equalising before the break was via a Bournemouth head. Marcos Senesi tried to clear Heung-min Son’s cross but only sent the ball crashing against his own post.

After some stern words at half time, Conte made a tactical change, replacing Skipp with Lucas Moura. Yet in the 50th minute, Bournemouth made it 2-0. So simple it was, too. A cross by Adam Smith and a header by Moore, who wanted to get to the ball more than Royal.

Bournemouth looked in control but in the 57th minute, Tottenham gave themselves a chance. Pierre-Emile Hojbjerg’s pass sent Sessegnon in behind and the wing-back fired a shot across the goalkeeper, defying the angle to find the far corner for 2-1. 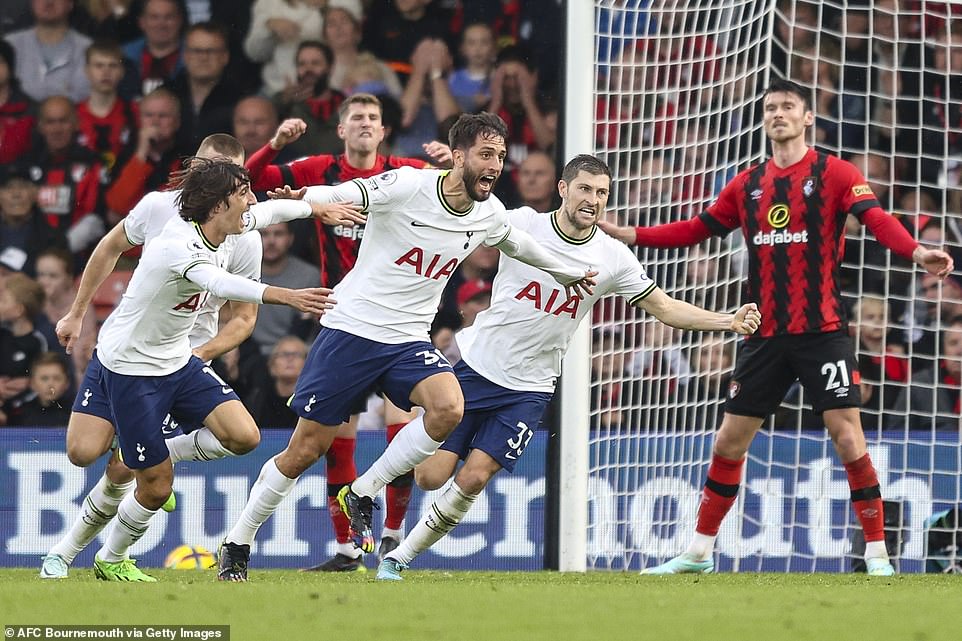 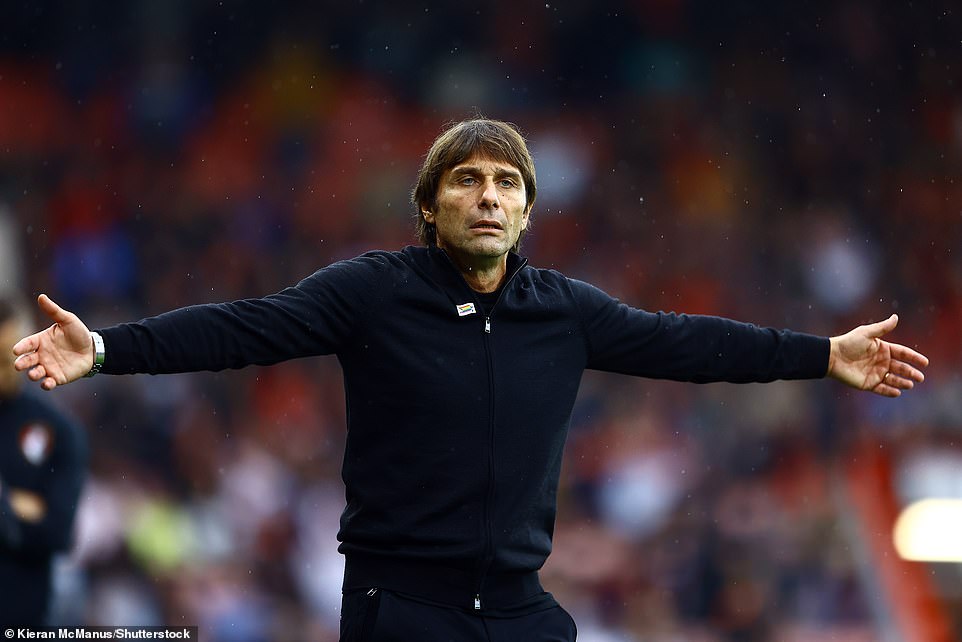 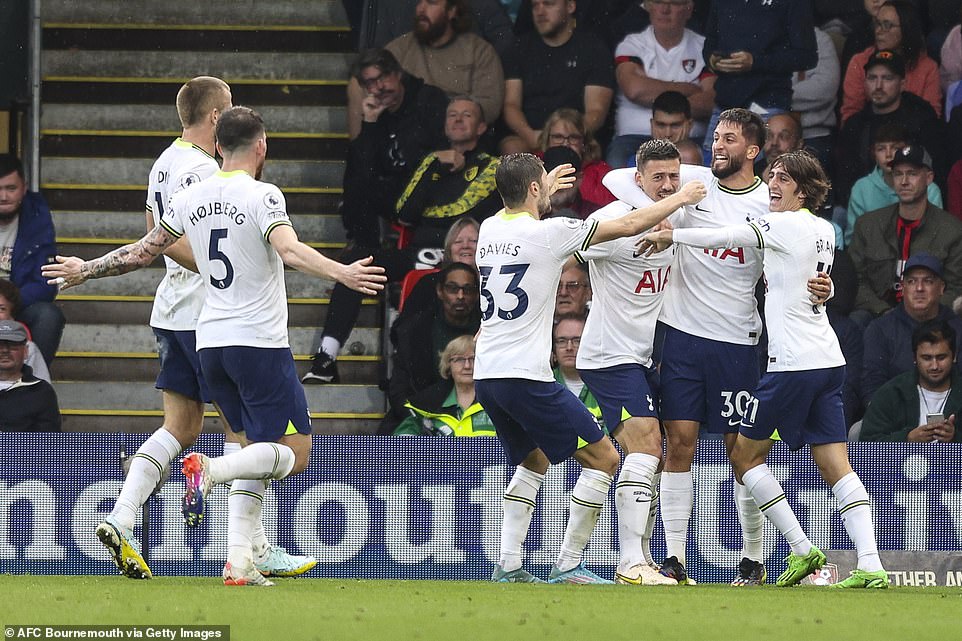 Just in time, too, because Sessegnon was about to be substituted. Conte brought on Dier and Bentancur with Tottenham making it 2-2 in the 73rd minute. Perisic’s corner was deep and found the head of Davies, who scored with Travers in no man’s land.

There was some ugliness by the sidelines when Moura clashed with a Bournemouth ballboy. The youngster seemingly wasn’t quick enough in giving Tottenham the ball back. Dier got involved, demanding he be removed from the touchline, and he was.

Once the game resumed, five minutes of stoppage time were announced and Tottenham won yet another corner. Son took this one from the left, Bournemouth failed to clear, and Bentancur pounced on the loose ball with his right foot.

They had trailed 2-0. Then they led 3-2. The losing run is over for Conte’s Tottenham. Now for Marseille this Tuesday.

Good news for Wales that Bournemouth’s Kieffer Moore is getting in on the goals, albeit Tottenham’s defending wasn’t the greatest at the Vitality Stadium. Another 90 minutes on the clock for England striker Harry Kane. You have to worry about his workload. 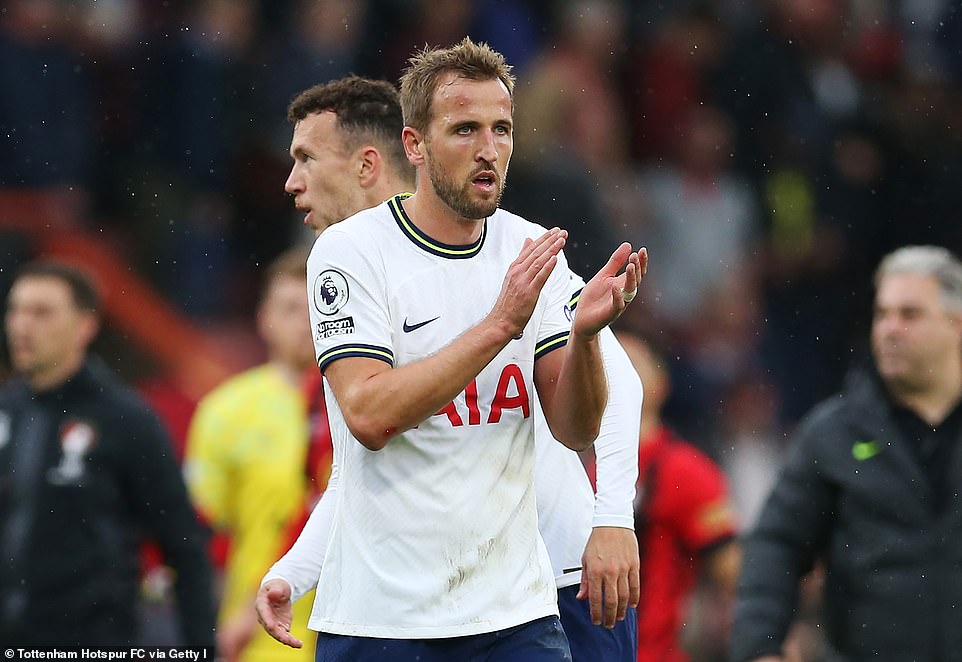