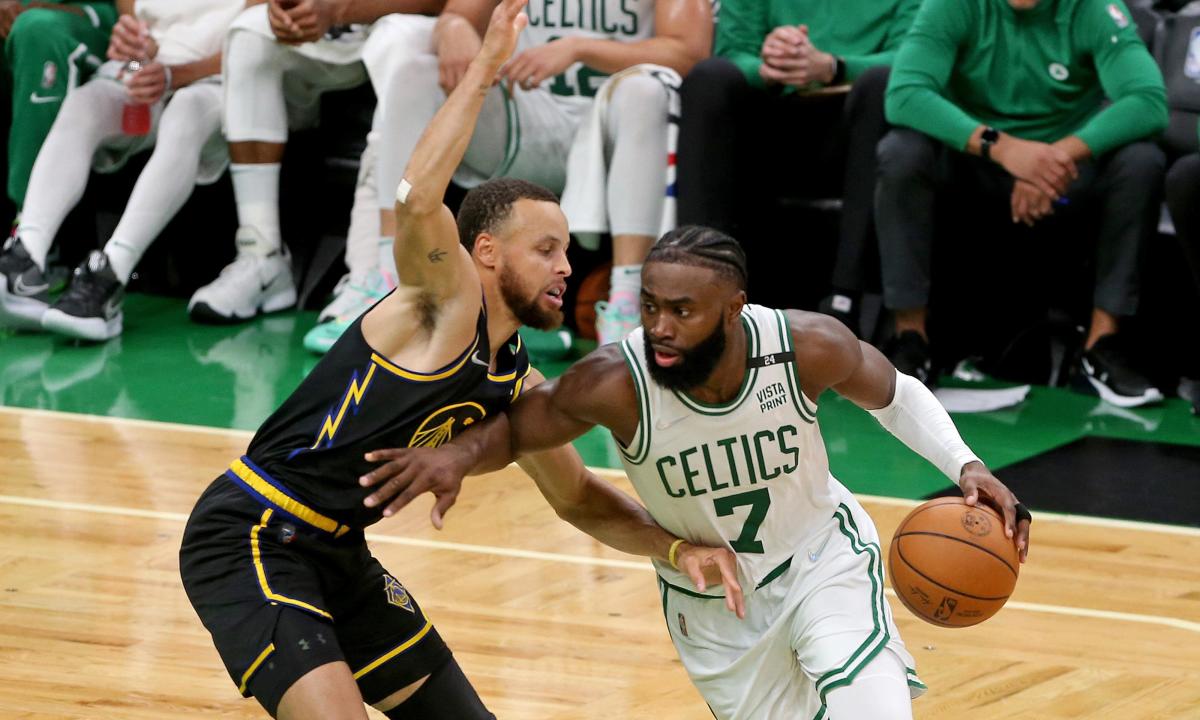 The season was only a dozen games old when Boston Celtics president of basketball operations Brad Stevens swatted away rumors that the team was looking to trade its forward, Jaylen Brown. Those rumors persisted into January, as the team entered the new year with an under .500 record, and concerns mounted over whether Brown and his fellow all-star, Jayson Tatum, could co-exist.

On Wednesday night, as the Celtics bested the Golden State Warriors 116-100 to take a 2-1 lead in the NBA finals, those trade rumors felt prehistoric – or at least as dated as the original Jurassic Park.

Related: Celtics move within two wins of title after holding off Warriors in Game 3

Brown sparked the Celtics early, igniting his team and the crowd with 17 first-quarter points. Marcus Smart, the league’s defensive player of the year and himself the subject of erstwhile trade chatter, quelled any Golden State threat with timely buckets. Tatum shook off a slow start and hit his stride late, finishing off the Warriors with 15 points in the second half. The trio combined for 77 points, serving as Boston’s best shotmakers and playmakers, providing class and energy that the team lacked in game two, and vindicating the front office’s decision to keep its core together.

“For us, it was just getting in the paint and making the right play,” said Smart. “We took what they gave us, and that was it.”

See also  Doc Rivers says he's committed to winning a title, but will it be in Philly?

It was the first NBA finals game on Boston’s parquet court since 2010, and a star of that Celtics’ team, Paul Pierce, was on hand Wednesday, sitting courtside in a resplendent green and white leather jacket. The rank-and-file also made their presence known, particularly to the Warriors’s Draymond Green.

After submitting a true heel’s performance in Game 2, Green received a villain’s welcome from the more than 19,000 in attendance at TD Garden. He was booed when he touched the ball and serenaded with profane chants throughout. Even more crucially, the Celtics’ players didn’t back down from Green either.

That resolve was captured by a sequence midway through the first quarter that began with Green blocking a lay-up by Brown. Green had some words for Brown, renewing their feud from Game 2. On the ensuing play, Brown called for the ball and promptly beat Green off the dribble before converting on a tough drive to the hole.

“[In Game 2], they brought the heat to us. For us, that left a bad taste in our mouth because what we hang our hat on is effort on the defensive end and being a physical team,” Smart said. “It definitely woke us up a little bit. We just wanted to come out, and if we were going to come out here and play, the last thing when we left that court we didn’t want to say we weren’t physical enough. It worked out for us.”

See also  A Ben Simmons return for Game 4 looking like a realistic target, even Game 3 a possibility

Green was the ultimate alpha in Game 2, antagonizing and rattling a Celtics team that has embodied the steely toughness of its coach, Ime Udoka. Wednesday’s game in Boston featured more chippiness from Green, but this time, the Celtics largely avoided taking the bait. Instead, they imposed their will with their characteristic hard-nosed play, dominating the glass with 15 offensive rebounds.

“We don’t love how we kind of wilted at times last game, and that was a big point of emphasis the last few days,” Udoka said.

It wasn’t the Warriors’ dark artist who posed the biggest test to the Celtics’ nerves on Wednesday, but rather their pair of virtuosos, Steph Curry and Klay Thompson. After trailing by 12 at the half, Golden State mounted a furious rally in the third quarter that was powered by their sharp-shooting backcourt. Curry scored 15 of his 31 points in the period, highlighted by a blur of a stretch that saw the Warriors briefly take the lead, 83-82.

Boston regained the advantage 30 seconds later, when Smart buried a three off a Tatum assist. In the fourth, the Celtics leaned on their top-rated defense to put the game away, holding the Warriors to a mere 11 points in the final period.

Udoka credited Boston’s bigs with switching on screens and defending the Warriors’ deadly shooters better after the visitors made their third quarter charge. And it has been Udoka, Boston’s first-year head coach, who has been credited for toughening up a Celtics team that had long flirted with title contention but could never break through. He took over for a team that, entering this season, had played in three of the last five Eastern Conference finals but won zero.

Repeated shortcomings often drive a front office to reckon with its personnel, to consider whether it’s time to shake up its nucleus, and to contemplate whether its players are good – but not quite good enough.

On Wednesday night, Boston was rewarded for sticking with their incumbents.