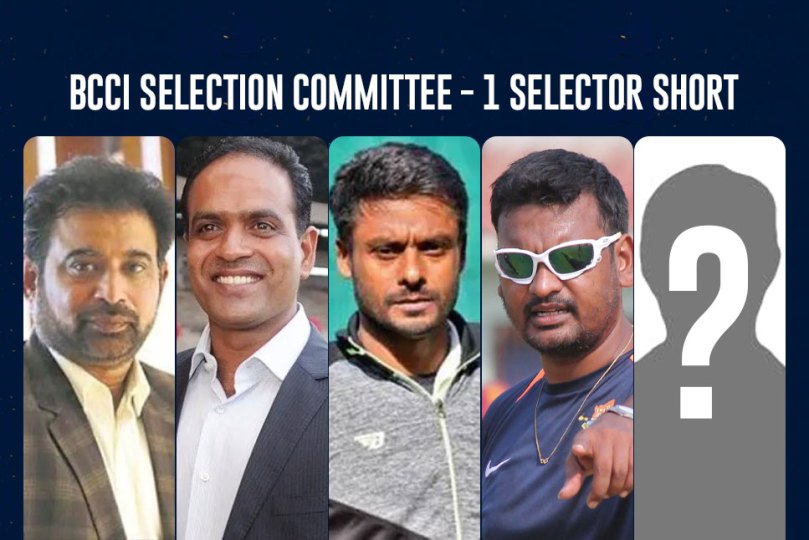 T20 WC India Squad – BCCI Selection Committee: Strange are the BCCI ways. The world’s richest & self proclaimed ‘most professional cricket board’ did not get time to in last 5 months to appoint a fifth selector on the national senior selection committee. Yes, you read it right, BCCI has been selecting NATIONAL CRICKET TEAMS with one selector short after Abey Kuruvilla resigned from his post in February 2022: Follow Indian Cricket LIVE Updates with InsideSport.IN

Kuruvilla resigned from his post in February as he had completed a total of five years on the board’s cricket committees. Since than BCCI has been selecting teams only with 4 SELECTORS.

Chetan Sharma, Sunil Joshi, Harvinder Singh and Debashish Mohanty have been selecting teams without a 5th SELECTOR on board. The selection committee with 1 SELECTOR SHORT has selected teams for SriLanka series, followed by the tours of Ireland and England, as well as the upcoming West Indies trip.

See also  IPL 2022: Reading Too Much Into Losses Will Put You In A Negative Spiral

“It has been busy 5 months. IPL 2022, Media Rights tender and the other tournaments & matters have kept the board busy. We will assure that the 5th selector gets appointed before the selections of Asia Cup & T20 World Cup squads”, quipped the BCCI official.

IND vs ENG LIVE: Another SETBACK for Virat Kohli, likely to MISS 1st…

BCCI Selection Committee: Former India fast bowler Kuruvilla meanwhile is already serving board as its General Manager Game Development. As per the BCCI’s new constitution, no person can stay on for more than five years as a member of any cricket committee.

Kuruvilla had earlier served as chairman of the junior selection committee for four years.

Who will pick the 5th Selector? Stragenly the committee which has to pick the 5th selector is also 1 man short since last year. As per the new constitution, the Cricket Advisory Committee (CAC) has to be a three-member committee and is responsible for selecting the selectors.

But in October last year, the head of CAC Madan Lal stepped down after he turned 70. The BCCI is yet to announce a replacement for former 83 World Cup winner. Rahul Dravid’s appointment as India head coach was done by the two-member CAC comprising Sulakshana Naik and RP Singh.

When will be the India T20 WC Squad will be selected? Squad Submission Deadline 15th September: The Deadline for Submission of squads to the ICC is out. According to available information with InsideSport, ICC has directed all boards to submit their 15 Member squad by 15th September. This means, Head coach Rahul Dravid and the Chetan Sharma led selection committee are left with only few opportunities to finalize Indian team for T20 World Cup.