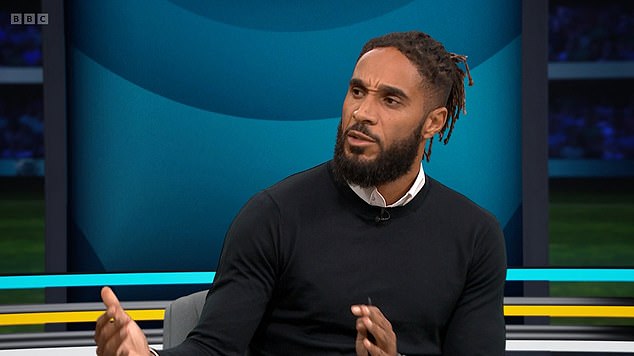 ‘The BBC are idiots!’: Broadcasters face fresh backlash for using Ashley Williams on Match of the Day 2 AGAIN despite the ex-Wales skipper being charged by the FA with improper conduct and violent, threatening behaviour at a kids’ football game

The BBC have once again faced backlash after Ashley Williams was used as a pundit on Sunday night’s Match of the Day 2, despite the former defender being charged by the FA with improper conduct and violent, threatening behaviour.

The former Wales captain made yet another appearance on the BBC’s football highlights show, this time alongside Mark Chapman and Alan Shearer, less than two weeks after Sportsmail revealed he had been hit with the charges.

Williams allegedly assaulted a coach at an Under 12s match in Manchester, in which his son was playing, though the 38-year-old has denied the allegations.

A witness stated that the former Everton and Swansea centre-back took to the pitch to confront an opposition coach who had intervened after Williams’s son had been involved in an exchange with an opponent.

However a spokesman for the ex-footballer claimed he was acting in self-defence, added that they would defend the charge ‘vigorously’ and said they had ’45 witnesses’ to back up his version of events.

And viewers quickly took to Twitter to criticise the broadcaster’s decision to use the pundit once again.

Ashley Williams’ appearance on Match of the Day 2 sparked outrage on Twitter, with the former defender having been charged with improper conduct and violent, threatening behaviour 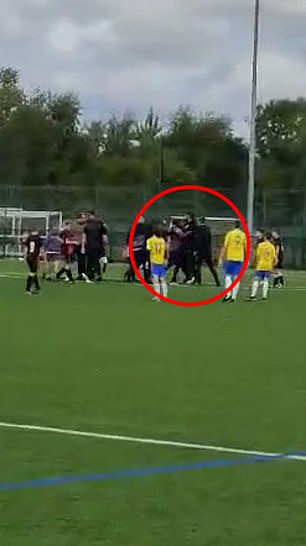 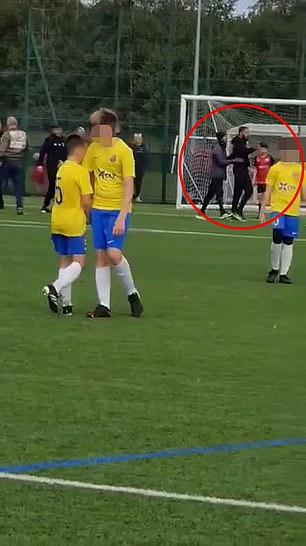 Ex-Wales captain Ashley Williams (circled, left and right) allegedly attacked an opposition coach at an Under 12s football match in Manchester as he watched his son play

‘@BBCMOTD2 any reason that Ashley Williams is still on your show?’ asked one Twitter user. ‘Just explained to my son who is 10 as to why he shouldn’t be.

‘If I had done what he did I would have lost my job. Pathetic.’

Another viewer was more scathing in their assessment of the BBC, writing: ‘Thought Ashley Williams thumped somebody at a kids match, how the f is he allowed on TV tonight, oh i forgot the BBC are idiots! #NoJustice #MOTD2’

But one viewer had clearly had enough of his continued inclusion on the show, adding: ‘THREE TIMES in a week now for Ashley Williams. This never happens. Just sick of it tbf #motd.’ 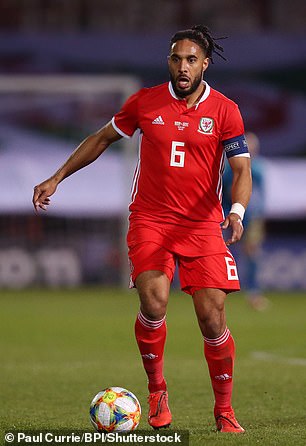 The incident took place at a match between Corinthians and Williams’s TSC United in the East Manchester Junior Football League on September 18.

The most recent wave of complaints comes just one week after the pundit’s previous appearance on the programme sparked similar outrage.

A BBC spokesperson said earlier in October: ‘This is a personal matter for Ashley and the sport’s governing body.’

However viewers are clearly still less than impressed by his appearances, with one questioning what sort of example the BBC can hope to be promoting.

They asked: ‘Is Ashley Williams really on @BBCMOTD @BBCSPORT after assaulting a coach at a junior football match? What an example,’ followed by a face-palm emoji.

Another was evidently surprised, writing: ‘Ashley Williams on MOTD?? Just charged for aggressive behaviour at a junior football match??!!’

And finally a football club Solihull Taps FC asked: ‘Why is Ashley Williams on #MOTD with a FA charge hanging over him for kicking off at a Under 12s game @EnglandFootball @BBCSport #disgrace.’