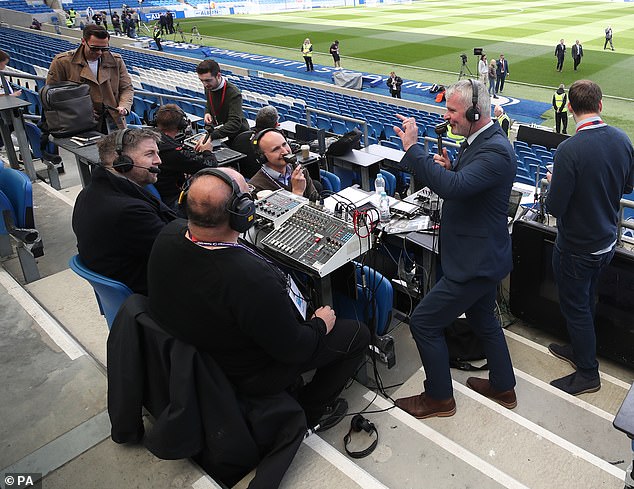 ‘Completely false, wrong and utter RUBBISH’: BBC commentator Guy Mowbray dismisses claims Match of the Day commentary is recorded post-game instead of live and at stadiums – as Gary Lineker says his colleague is ‘100 per cent’ truthful

Guy Mowbray has angrily hit out at those who suggested Match of the Day commentary is not recorded live.

Online rumours suggested commentary for the Premier League highlights show was recorded and added post-game instead of live and in the flesh at stadiums.

And BBC commentator Mowbray dismissed the ‘nonsense’ claims, labelling them ‘completely false, wrong and utter rubbish’ – with Match of the Day host Gary Lineker backing up his statement. 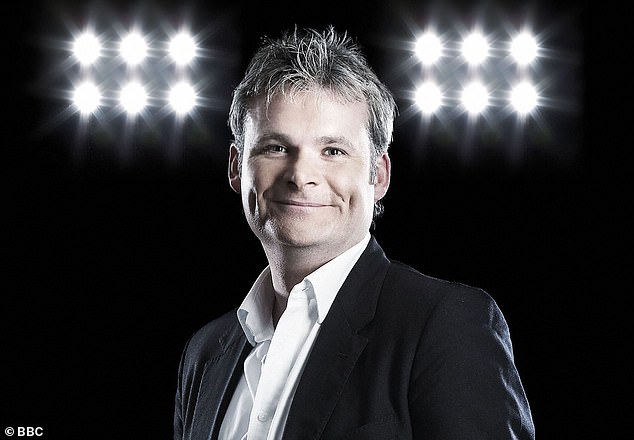 Mowbray, 50, is one of BBC’s most high-profile commentators and has worked there 18 years

Been shown a couple of tweets today from people who ‘know’ that the MOTD commentary is done afterwards over the edit. What else completely false, wrong and utter rubbish do they ‘know’? Never the case, never was, never will be. All live. I actually do ‘know’

He said: ‘Been shown a couple of tweets today from people who ‘know’ that the MOTD commentary is done afterwards over the edit.

‘What else completely false, wrong and utter rubbish do they ‘know’? Never the case, never was, never will be. All live. I actually do ‘know’.’

When it was suggested ‘the odd line’ might be added post-match for continuity reasons, Mowbray added: ‘The odd line. Maybe once in an entire season.

‘Speaking for myself, there has to be a VERY good reason for it – not just to make the editor’s job easier, or in a ‘predictive’ context. Apologies, but I care about what we do and can’t abide falsehoods being spread around as fact.’

He later posted: ‘Guess I should view it as a compliment. ‘How do they do that? I don’t understand. They must make it up after’.’

Lineker posted: ‘Confirmed: 100 per cent true,’ with fellow MOTD commentator John Roder responding: ‘I can’t quite work out why people believe we do the commentary afterwards for MOTD. We don’t, it’s all live, & then we go home.’ 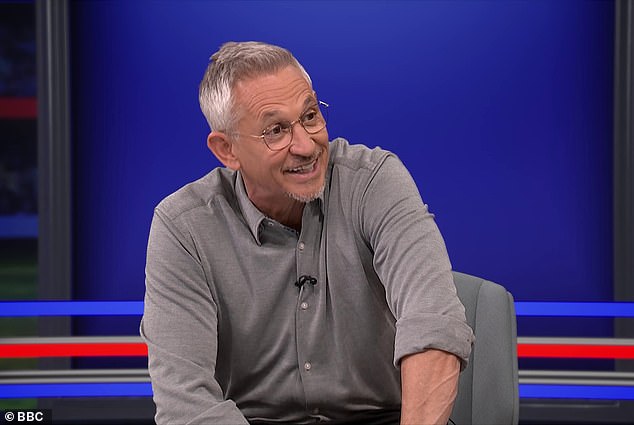 ‘I’d supposedly driven to TV Centre after the match, wrote a script for the 8.5 minute edit and re-voiced it. Final line: ‘BBC deny this’. It was all untrue.’

Mowbray later replied directly to critics commenting below his tweet.

One football fan said: ‘Not buying that for a second. Where I’ve picked out it is done after games is there is sometimes a clip of the bench or manager reacting.

‘When I’ve watched the game live beforehand that same clip was at a different part of the game but BBC have commented in a build up to a goal.’

The 50-year-old responded: ‘That’s a completely different thing done by an editor – and only allowed to happen if deemed essential. The commentary is live.’

Another fan said: ‘Seem to recall one of the comms team once saying that the comm is *sometimes* done in-studio after the game, but that they don’t know the result. Can’t recall who said it, was ~10 years ago though??’

Mowbray then replied: ‘Nonsense. The only time EVER is if a commentator hasn’t been sent (Monday or Thursday night game for example – no programme) and a goal needs commentary on it for archive purposes.’ 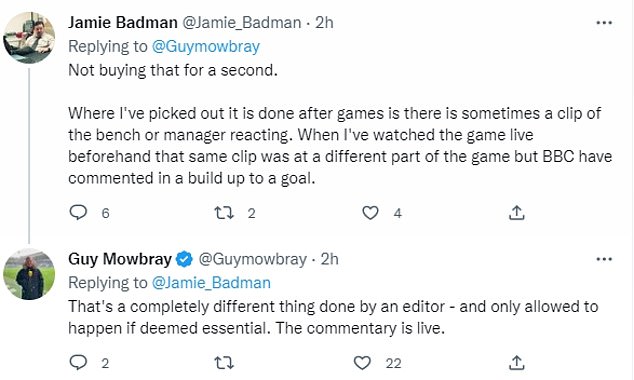 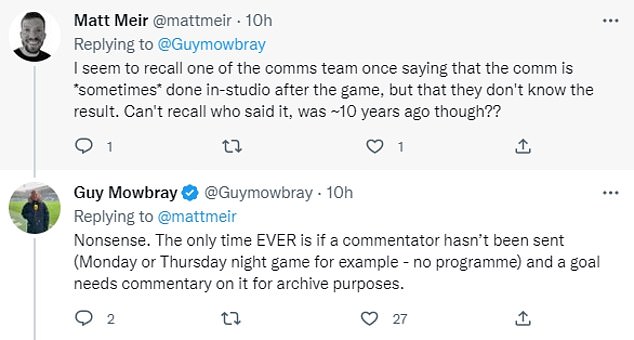 Mowbray, 50, then replied directly to several football fans who questioned what he was saying

A third tweeted: ‘So when the commentator just happens to make a telling comment about a player that’s about to score or something that’s about to happen that’s just luck is it.

‘Seems to happen a lot more on highlights than live commentary.’

In response, Mowbray posted: ‘To a degree, yes it is. I’d prefer to think of it as knowing how to commentate – & it happens just as often live.

‘Speaking for myself, the style doesn’t change for live or highlights. Same job. If it doesn’t happen, it’s either not in the edit or you don’t remember it.’

Another commentator in John Anderson joked: ‘I usually watch the game in the Dog & Duck then head to the studio to sober up before adding the voice track.

‘At half-time on Saturday I said: ‘goalless so far but if De Bruyne gets an early 2nd half free kick and curls it in off a post from 25 yards Man City should win’.’

Working for Eurosport at the 1998 World Cup, Mowbray – then 26 – became the youngest ever TV commentator to cover a World Cup final.