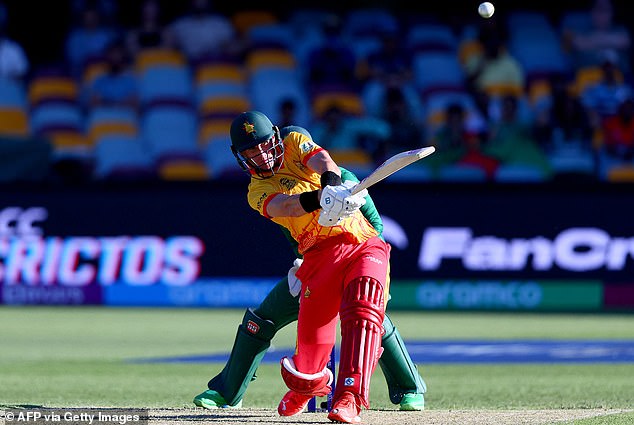 Bangladesh sealed victory over Zimbabwe by three runs in their T20 World Cup match at the Gabba after a dramatic final delivery had to be rebowled – which left cricket commentators shocked.

With Zimbabwe requiring five runs to win off the last ball, tailender Blessing Muzarabani appeared to be stumped off the bowling of spinner Mosaddek Hossain.

But wicketkeeper Nurul Hasan was found to have gloved the ball in front of the stumps before taking off the bails, a no-ball under the rules. 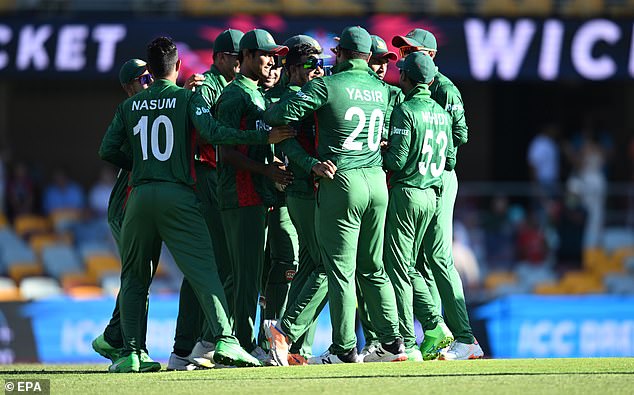 Bangladesh are pictured celebrating winning the match against Zimbabwe. The side won by three runs in their T20 World Cup match at the Gabba after a dramatic final delivery had to be rebowled following a DRS review

The players had left the field but, following a DRS review, were recalled for the last ball, with four runs required.

Muzarabani had a free hit but missed the ball.

Bangladesh opener Najmul Hossain Shanto (71 off 55 balls) had earlier powered his team to 7-150.

Bangladesh appeared in control for most of the chase but with 16 needed from the last over, Zimbabwe tailender Richard Ngarava hit a four and huge six from the third and fourth deliveries to leave just five required.

Ngarava was then stumped before the final dramatic delivery.

Shanto said the last delivery was ‘a totally new experience’.

‘Mosaddek bowled very well in a pressure situation. Honestly, we were a bit nervous but we believed we could do it,’ he said.

It took a wonderful run out by skipper Shakib Al Hasan to get Bangladesh home in the end after a superb fightback by Zimbabwe.

Zimbabwe needed 82 off the final eight overs and veteran Sean Williams (62 off 42 ) and Ryan Burl (27 off 25) whittled that down to 19 off nine balls when Al Hasan ran out Williams with a turn and throw in one motion from his own bowling to seal the deal. 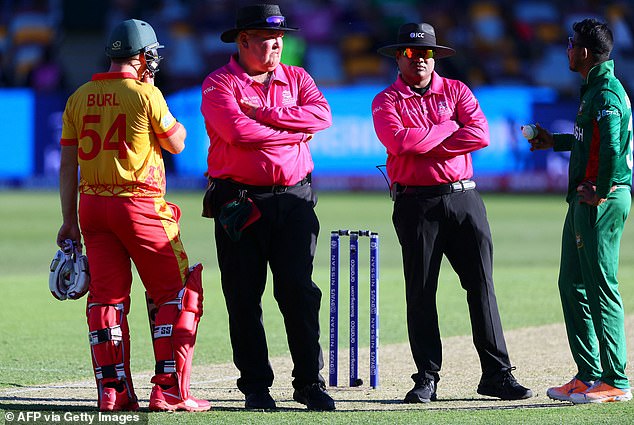 Williams said watching Muzarabani go back out for one final ball was ‘extremely weird’.

‘I’ve never experienced something like that in a cricket match but it just goes to show in a T20 match there is always hope. Anything can happen,’ he said.

Cricket commentators and journalists were as astonished as everybody else by the bizarre scenes – and took to Twitter to comment. 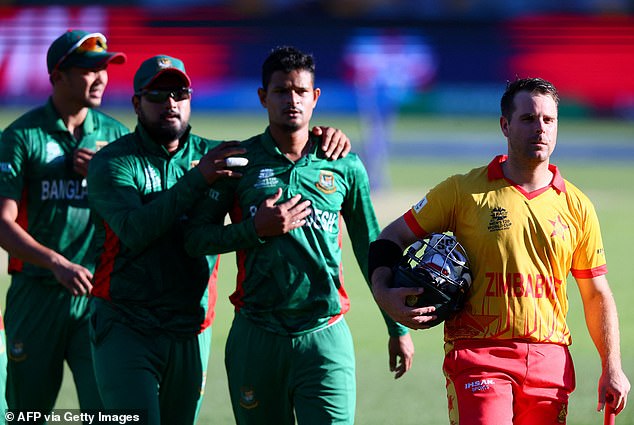 ‘Oh my god. No ball. Free hit. Players on their way back out!,’ wrote cricket commentator Melinda Farrell.

‘IT’S A NO BALL. WHAT IS HAPPENING? THE KEEPER WAS AHEAD OF THE STUMPS. THEY ARE ALL CELEBRATING AND OFF THE FIELD,’  commented journalist Farid Khan.

The win took Bangladesh to four points in Group Two but they are still to play India and Pakistan.

The loss was a dent to Zimbabwe’s finals chances and they remain on three points.