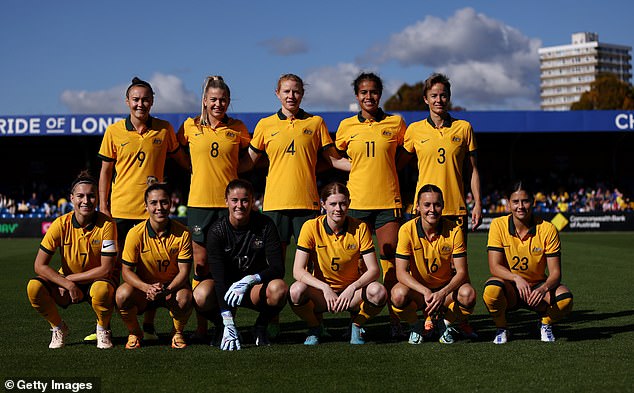 The Matildas will face a tough task at ‘the most competitive Women’s World Cup in history’, drawing a tricky group for next year’s tournament in Australia and New Zealand.

The pools and draw was finalised during a glitzy ceremony in Auckland on Saturday evening, with the Matildas set to face Olympic champions Canada, first-timers Ireland and the 45th-ranked Nigeria.

The tournament, which is set to take place from July to August next year, features 32 teams for the first time and has been described by women’s football icon Jill Ellis as ‘the most competitive women’s World Cup in history’.

Canada (world no. 7) will no doubt provide the 13th-ranked Aussies with the sternest test, but even Ireland (24) recently beat the Matildas, and Nigeria (45) are always exhilarating at major tournaments.

The Matildas, pictured prior to a friendly against South Africa on October 8, will face Nigeria, Ireland and Canada in the group stage of next year’s World Cup in Australia and New Zealand 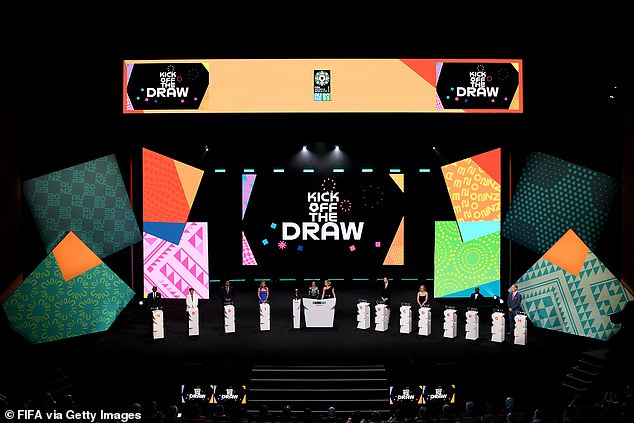 As top seeds, Australia avoided the six top-ranked countries, led by the two-time reigning world champions and world No.1 USA, but if they don’t win their group, they will likely have to face Euro 2022 champions England.

So the recent inconsistency of the Matildas needs to end – they simply must win this group if they are any chance of challenging at their home World Cup.

Under-fire Aussie coach Tony Gustavsson admitted it was a tough draw for his side.

‘Bring it on,’ he told AAP in Auckland after the ceremony on Saturday night.

‘England in the first playoff … and then after that, it’s going to be France and Germany on that side of the bracket too. Ranking-wise it’s a very, very tough.’ 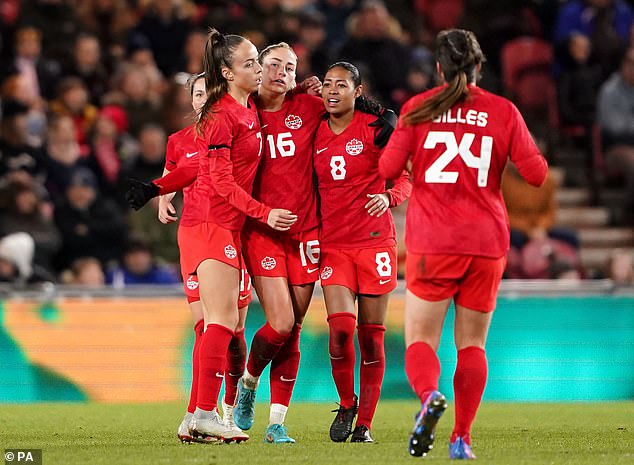 Australia will face Canada (pictured) in the group stage of next year’s World Cup. It was the worst possible result, with the reigning Olympic champs the top-ranked team in pot two

The most interest at Saturday’s draw was in who would come out of pot two to face Australia, with Brazilian legend Gilberto Silva drawing out Canada – the highest-ranked opponent available.

The Maple Leafs won gold at the Tokyo Games and narrowly lost their continental championship to the USA 1-0 in July.

They are also recent visitors to Australia, playing two matches last month against the Matildas and winning both with relative ease while superstar Sam Kerr and her teammates missed a glut of easy opportunities and appeared confused with Gustavsson’s bewildering selection and tactics.

Australia will kick off the tournament with an opening day match against Ireland on July 20 in Sydney, before they take on Nigeria in Brisbane on July 27. 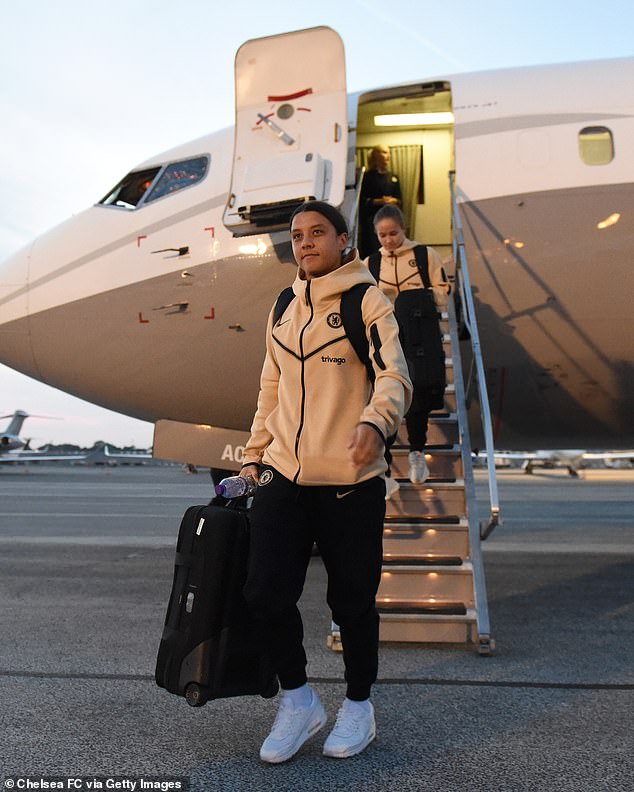 Australian skipper Sam Kerr, pictured travelling to a Champions League match for Chelsea this week, will be critical for the Matildas chances in a tricky group

The last group stage game for the Matildas will be the mouth-watering match-up against Canada in what is set to be a buzzing atmosphere at AAMI Park in Melbourne on July 31.

After speeches, pomp, montages and even dance, USA two-time World Cup-winning coach Jill Ellis brought the trophy to the stage, before the path to silverware was revealed, with four groups to be based in Australia and four in New Zealand.

Groups D, F, and H – headed by England, France and Germany – are off to Australia, while groups C, E and G, with Spain, the USA and Sweden as top seeds, will play their group-stage matches in New Zealand. 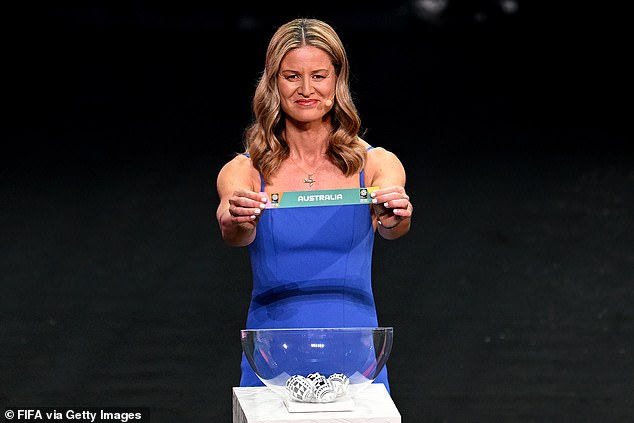 Earlier on Saturday, Infantino chaired the bi-annual meeting of the FIFA Council, the first such meeting in Oceania.

In a press conference following the gathering, the furious FIFA chief took aim at broadcasters for their below-par bids to screen the 2023 tournament, which he said were ‘100 times less’ than bids for the male event.

‘We are not going to accept this.

‘We know that the viewing figures for these broadcasters in some big footballing countries for the men’s World Cup or for the Women’s World Cup are actually very similar, especially in the recent past.

‘We have viewing figures in the US Women’s World Cup, 1.2 billion people around the world … the final 263 million, which is more than twice the Super Bowl,’ said the furious Infantino. 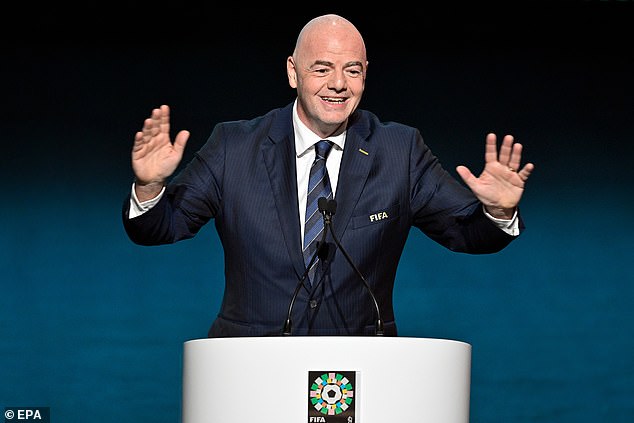 The Matildas, who are one of Australia’s most beloved national team of any sport or either gender, have had a rollercoaster few years under Gustavsson – however two Friendly wins in the UK recently have boosted the confidence levels somewhat.

After embarrassingly crashing out in the Asian Cup far too early to start the year, a string of diabolical losses followed as fans continued to scratch their heads over the continually changing selection from Gustavsson – and a playing style that didn’t appear to suit the incredible talent at the team’s disposal.

The side have won just four of their last eight games, with just two of their opponents ranked higher than them.

Catley said the side was fully prepared for a potential showdown against England in the group of 16 – and is confident the team have turned their fortunes around of late. 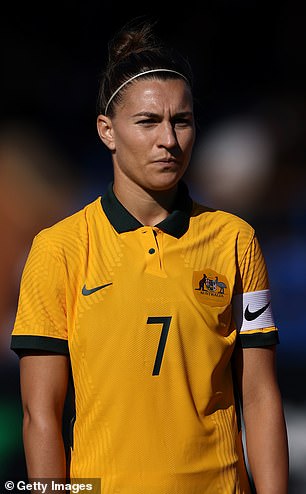 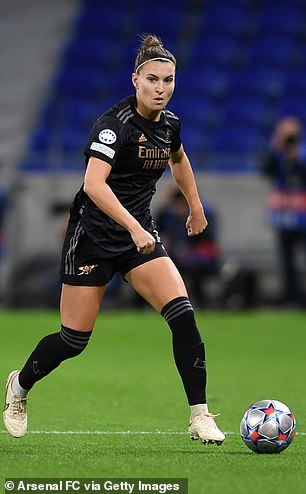 ‘That’s nice and close to home for a lot of us that play over here (England). It would be an absolutely incredible game if we did come up against them,’ she told the Sydney Morning Herald.

‘If we get them nice and early, I don’t think that’s necessarily a bad thing … if you want to win, you’ve got to beat everyone.

‘Now we know who we’ve got, we can start to figure out what sort of game plans we need.

‘We’ve just recently had some good results and got back to winning ways, so that’s been a nice little boost for everyone. But really, the real preparation starts now,’ said Catley, a silky-skilled left-footed defender who has 100 caps for Australia. 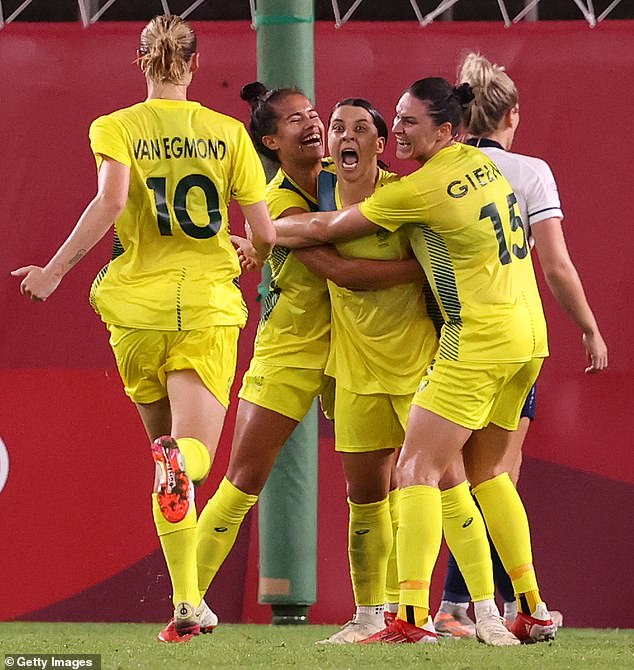 ‘The Matildas are the shining example of that (investing money and resources gets a better product on the field),’ she said.

‘They’re one of the marquee teams of this country across all sporting codes and genders.

‘Sam Kerr is an absolute superstar and you’ve got men and boys following her just as much as the women and girls.’ 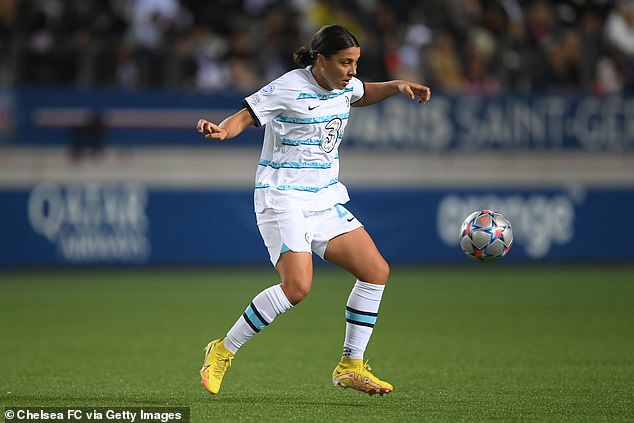 Sam Kerr, pictured playing for Chelsea in their Champions League win over Paris Saint-Germain on October 20, will create a whole new generation of young Aussie superstars after the World Cup

So what and who exactly will the Matildas be facing during the group stage?

There were jubilant scenes when Ireland qualified for their first-ever World Cup earlier this month, with a brilliant 1-nil win over arch rivals, Scotland.

Women’s football has enjoyed somewhat of a renaissance in Ireland over the last decade, with the country pouring resources into the game in order to compete with the traditional sports of Gaelic football and hurling.

The Matildas have only faced Ireland once (last year) – and it did not go well. Not only did the team go down 3-2 in Dublin, but Aussie striker Chloe Logarzo suffered an ACL and Gustavsson’s bizarre choice to pick a team of untried youngsters kickstarted a rollercoaster year. 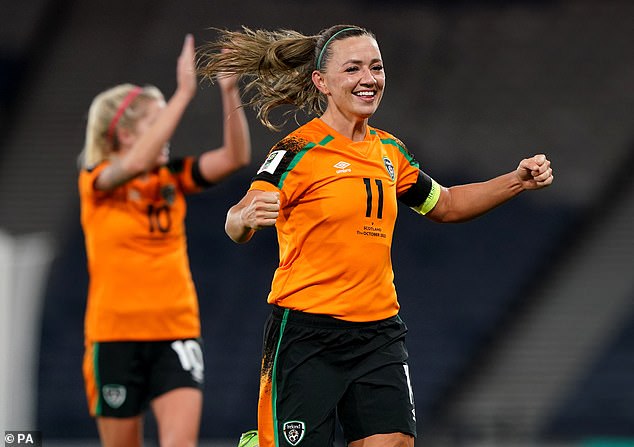 Ireland Coach Vera Pauw sees a symmetry in their opening-night clash with Australia. The Irish have lost just twice since that famous victory over Australia just over 12 months ago.

‘It’s exciting. We don’t fear anything. Home and away, there’s no difference, whether it’s a full stadium, whether there’s nobody around, it doesn’t make a difference for this team,’ she said.

‘We are just going to live it to the full, we’re going to embrace it, and the more pressure the better.’ 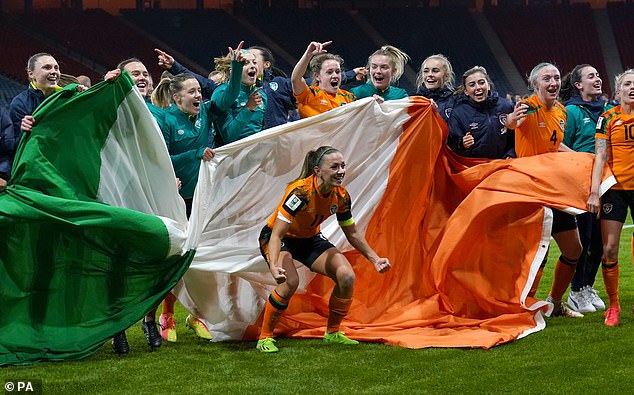 Pauw credits that win over the Matildas as the catalyst for the side finally qualifying for their first World Cup.

‘Australia were the better team of course, but we somehow managed to win,’ she said.

‘It was a fantastic game and that was a turning point, (bringing) real belief that we can do something, that we can grow.’

Nigeria are obviously the easiest match-up on paper for Australia, but even though the nine-time African champions could only manage fourth in this year’s tournament, they have enough talent to ensure Australia cannot be complacent.

Asisat Oshala, considered by many to be the country’s best-ever player, and one of Africa’s greatest too, heads up the attack of European powerhouse Barcelona – and she will prove herself a nightmare for the Matildas defenders.

While Nigeria are the lowest-ranked side in the group, former player Oluchi Tobe-Chukwu – standing in for coach Randy Waldrum in Auckland – said the Super Falcons were confident.

‘When I saw the draw, I was hopeful. I was happy that it isn’t a very difficult group,’ she told AAP. 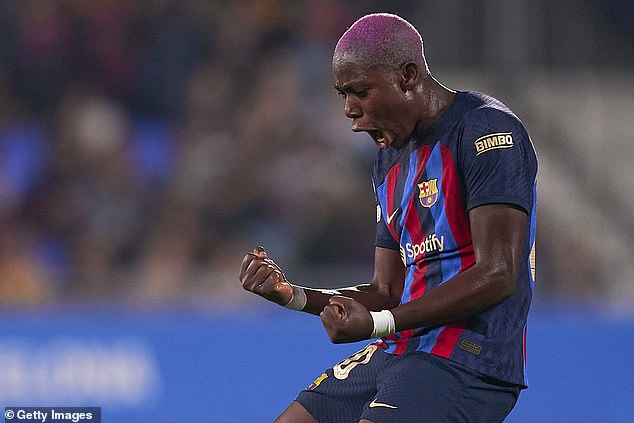 One thing is for sure, no matter what happens on the field there will be a lot of joy off it for the estimated 20,000 Nigerians who live in Australia.

‘Fans can look forward to see the way Africans celebrate when they score goals. And I can tell you that we will play beautiful football,’ said Tobe-Chukwu.

‘We have the best-organised supporters group in the world, with trumpets and drums … it overwhelms and drowns drowns a lot of chants. They will find a way to Australia.’ 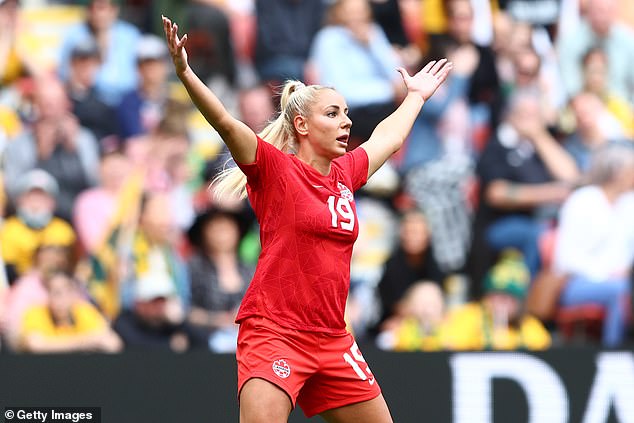 The Australians know Canada well, but they won’t have happy memories. The Maple Leafs beat the Matildas at the 2016 Olympics and again last month in two friendlies, and they are one of the top teams in the world.

After being bundled out by a strong Sweden side in the Round of 16 at the last Wolrd Cup, Canada were brilliant at the Tokyo Olympics last year, holding on for stunning penalty shootout wins over Brazil and Sweden.

The side is led by Christine Sinclair, who has kicked an astonishing 190 goals from 317 caps over the last 22 years, while the defence is incredibly stout thanks to Kadeisha Buchanan and Ashley Lawrence, who both ply their trade in the strong French league.

Jessie Fleming will also be an exciting youngster for the Matildas to watch out for. The dynamic midfielder continues to grow and deliver on her undoubted potential alongside Kerr at Chelsea. 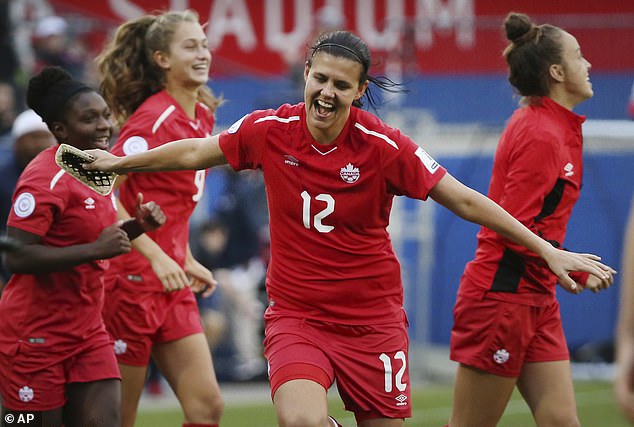 Canada captain Christine Sinclair is undoubtedly her country’s greatest ever, and the Matildas brains trust will no doubt be putting lots of energy into how to stop her

‘Our group, it could be worse but it could be better. I’m feeling good,’ said Canada coach Bev Priestman, who oversaw two friendly victories over Australia last month.

‘That experience will definitely be invaluable.’

Crucially for both sides their encounter also the last match, setting the stage for a showdown to decide top spot – or a tough-as-nails battle to stay alive in the tournament.