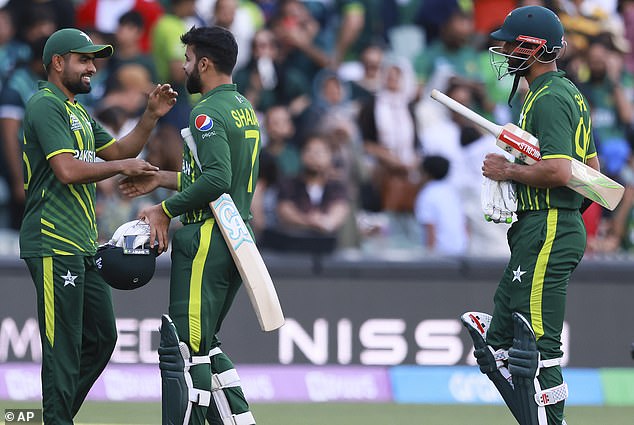 An ’emotionless’ Australian side were accused of ‘flying the white flag’ at the T20 World Cup – but passionate former legend Matthew Hayden is ensuring the Pakistan team are doing anything but.

After Pakistan secured an improbable semi-final berth with a win over Bangladesh, Hayden, their batting coach, could not contain his pride at what the underrated squad had accomplished.

A heartbreaking loss against arch-rivals India in front of more than 90,000 fans was followed by a shocking one-run loss to Zimbabwe – and the tournament was seemingly over.

Thanks to the Netherlands upsetting South Africa, Pakistan were able to advance with a win over Bangladesh, and the 103-Test veteran delivered a stirring speech to inspire his charges with Wednesday’s crunch semi-final against New Zealand awaiting.

‘Who cares what has happened over the last three weeks, we are here (the semi-final). So, well done. Just a magic day and you’re going to have to punch the smile off of my face,’ said Hayden.

‘We had a pretty good day,’ Hayden laughed as he addressed the players in the dressing room.

‘It’s just a miracle that we are seeing unfold here but even before we got to this day, I sensed that we have this trust in the process, we weren’t overcomitting to our the training. We had a day off and we celebrated that day off.

‘I think in T20 cricket, it’s one of those games that you can overplay, overtrain for and overthink. And when I look at this side and I have seen this for a while now, I think we are such a good reactive team.

‘We have got the energy there, we’ve got the commitment and belief to each other, then the magic just unfolds. And today was a magic day.

‘Having said that, we win and we lose together. Today is a winning day and on any given day, there are always going to be people who will lose in a winning day but that’s for conversations months from now, who cares,’ said Hayden. 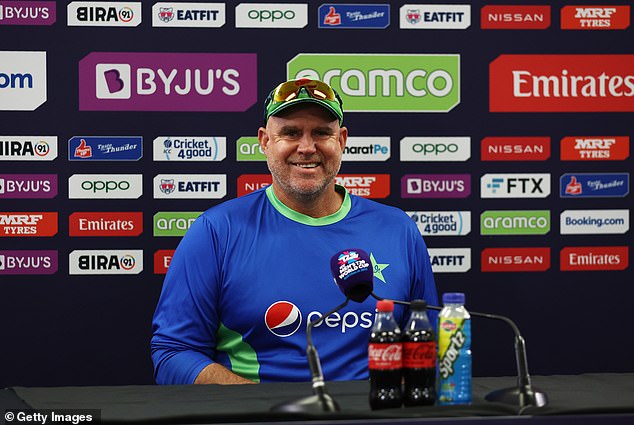 Beating Bangladesh to secure a semi-final seemed fait accompli once the opportunity presented itself, but a slow start had the side in danger of failing to reel in the low total of 127.

Instead of lamenting the lack of hustle at the top, Hayden implored the Pakistan players to stick true to the attacking style, because when they are at their best, they terrify every team in world cricket.

‘Boys, we are dangerous, just understand and appreciate that,’ Hayden continued, saying he was ‘100 per cent behind’ his two openers Mohammad Rizwan (32 off 32 balls) and Babar Adam (25 off 33 balls).

‘The moment Pakistan cricket fires off with intent and starts to reveal its teeth, we become a real threat.

‘There will be no one in this world and this competition that would want to face us right now, not one.

‘They thought they got rid of us, but now they are not going to get rid of us. We are here, dug in and I actually love how we have gone about this,’ said Hayden. 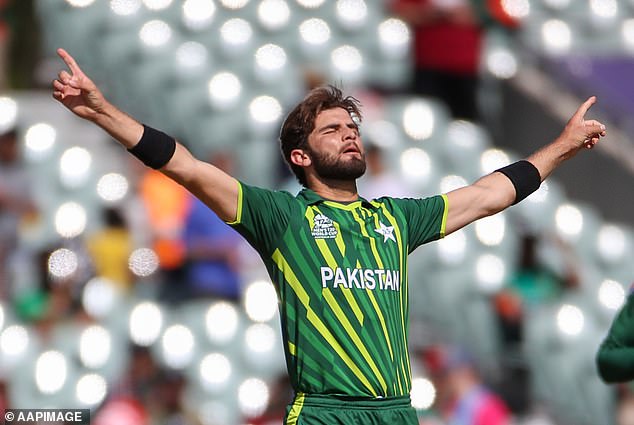 It’s fight Aussie supporters would no doubt be hoping their national side had have showed at a home World Cup where motivation should have been easy to come by.

After an apparently ‘fatigued’ side bombed out with barely a whimper, Aussie star Glenn Maxwell said it ‘doesn’t mean anything’ and the the team would be ‘moving on pretty quickly’.

It came at a time where interest in the national T20 side was at an all-time low, with the team perceived by many fans as arrogant and disinterested, a point noted by many former Aussie legends like Hayden.

‘When a captain of the national team is saying it [the team is fatigued] before a tournament starts, that’s white flag stuff before it even starts … that really gets up my goat,’ former ODI star and prominent commentator Simon O’Donnell said on SEN Radio.

‘I couldn’t understand how emotionless we were … I thought we just looked not there.’ 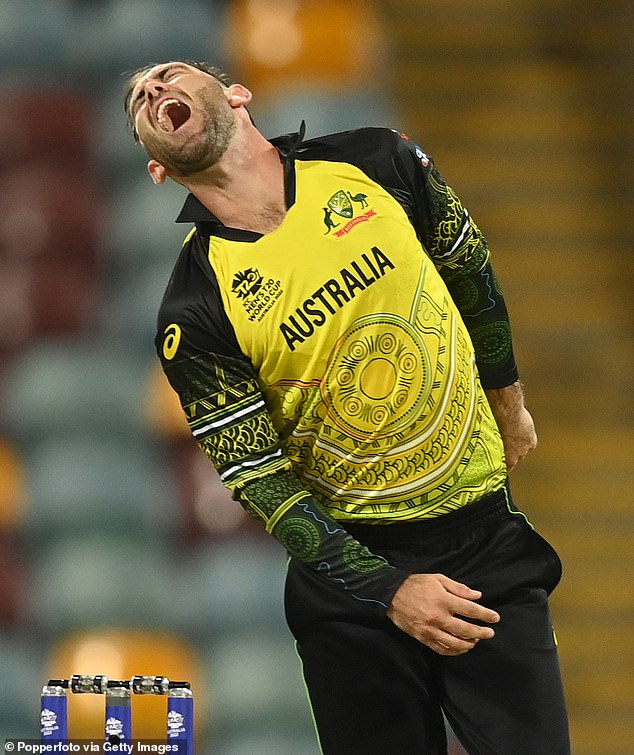 Aussie star Glenn Maxwell reacts during the side’s game against Ireland. The host nation bombed out of the World Cup and failed to make the semi finals

Australian coach Andrew McDonald didn’t even front up to the post-match press conference after Australia’s last game of the tournament, preferring instead to send bowling coach Daniel Vettori.

There was no boot up the backside for the continual excuses and poor performances by the side, nor was there an attempt at inspiring the Aussie players with a few choice words in public to tug at the heartstrings and evoke some sort of response.

McDonald only ended up in the role after a push by players to oust Justin Langer – Hayden’s best mate – as coach. 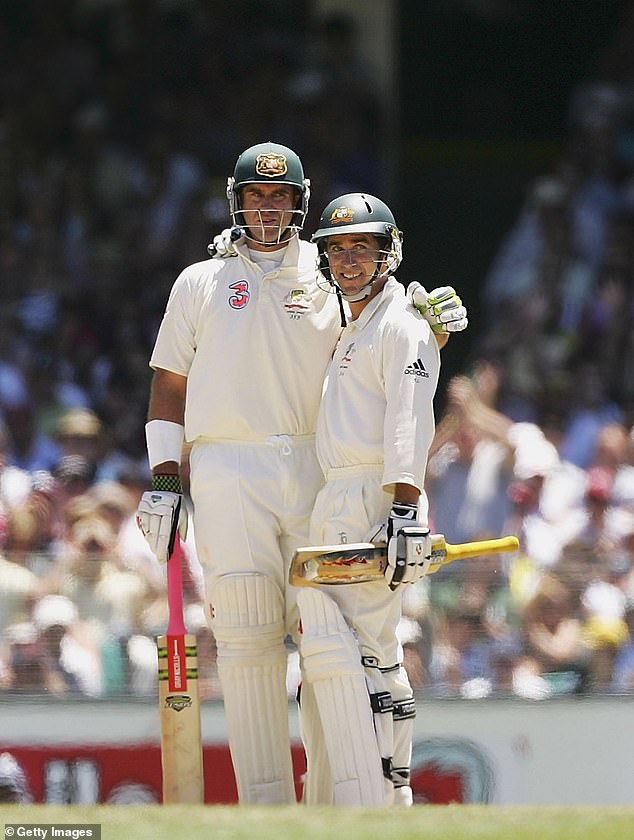 Matthew Hayden (left) was scathing of Cricket Australia and the players treatment of close mate Justin Langer (right), with the two both passionate men with an innate ability to inspire their troops

Hayden was in tears after Langer announced his resignation, that was effectively forced, taking aim at the players and Cricket Australia for the diabolical situation.

So instead of firing up Australia at a home T20 World Cup, he’s sitting in the Pakistan dressing room inspiring his heavily emotionally-invested team as they prepare to take on New Zealand in Wednesday’s semi-final.

It will be no small feat to take on the rampaging Kiwis of course, but judging by the way Hayden speaks with such genuine pride at what they’ve already accomplished, he’ll be there to spark the fire within either way.