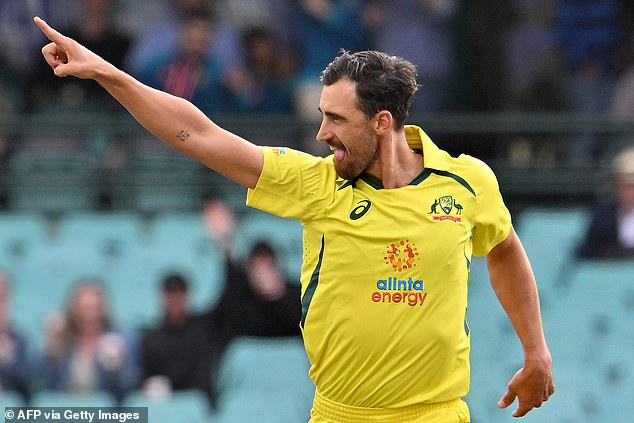 England’s back-up batters threatened to square the anticlimactic one-day series in Australia, only for things to unravel spectacularly under the Sydney floodlights.

Half-centuries from Sam Billings and James Vince saw England reach 156 for three in the 28th over of their pursuit of 281.

But with the asking rate below the initial 5.8 at the start of the innings, and Australia desperate for a wicket to check the momentum, an umpire’s call lbw accounted for Vince, and England went from cruise control to full implosion. 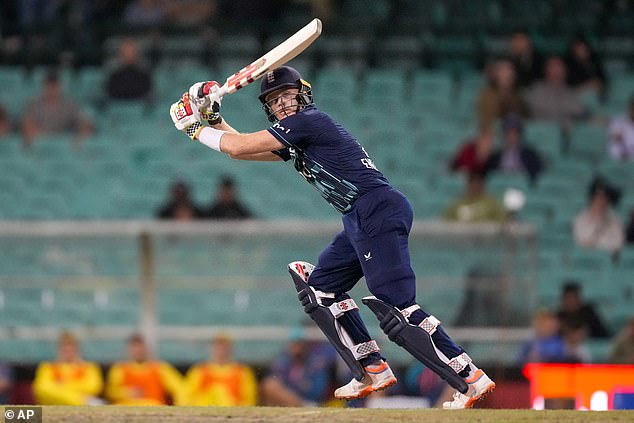 In all they lost seven for 52 as Australia triumphed by 72 runs to take an unassailable 2-0 lead heading into the final match of a tour tagged on the end of the Twenty20 World Cup.

England’s chase got off to a disastrous start when Jason Roy’s miseries continued in an opening over that also saw Thursday’s centurion Dawid Malan dismissed.

Roy made another single figure contribution in a year that has seen him lose his place in England’s Twenty20 team and suffer a dip in his one-day returns – the made just 121 runs in five innings versus India and South Africa last summer.

Yet with an ODI average still in excess of 40 and a strike rate better than 100, he arrived in Australia with a vote of confidence as the 50-over team’s opener. 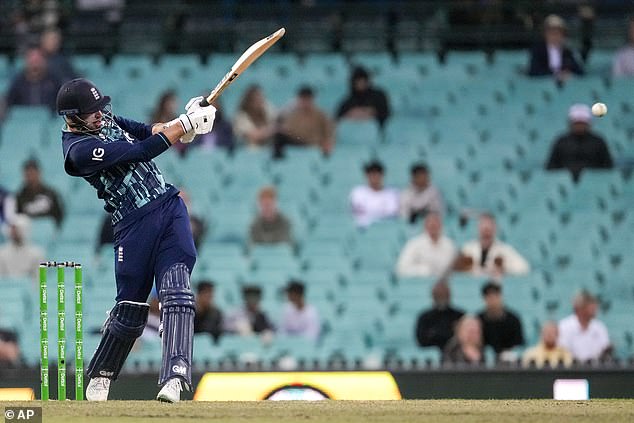 James Vince also played nicely for 60, but was dismissed by Josh Hazlewood at a key moment

However, the nature of his dismissal – a leg-side strangle off Mitchell Starc – emphasised the rotten rut he is in.

Three balls later, and a team being captained un ODIs for the first time by Moeen Ali were 0-2 when Malan received an unplayable 90 mile an hour away swinger from Starc that pitched on middle stump and rocked back off.

And although Phil Salt attempted to alter the mood with a boisterous counter-assault of 23 from 16 balls, his ugly departure to Australia’s own stand-in captain Josh Hazlewood left England three wickets down in the sixth over and requiring serious innings surgery.

Without A listers like Buttler, Joe Root, Jonny Bairstow and Ben Stokes, it was applied by Vince and Billings in a stand of 122 inside 23 overs that began watchfully but burst into life as the latter in particular played catch-up following a torrid start against Hazlewood. 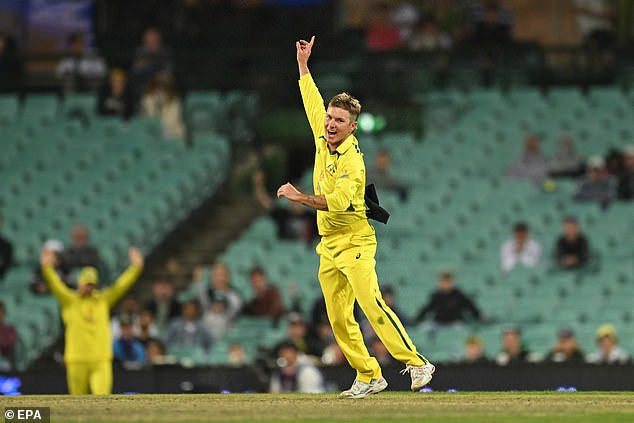 Using their knowledge of Sydney, a city in which they have both played franchise cricket, they targeted left-arm spinner Ashton Agar, exploiting the ground dimensions to lift him for three sixes.

They had got England ahead of the asking rate, in fact, when Hazlewood brought himself back to pin Vince leg before.

It sparked a spree of four wickets in 19 deliveries, with leg-spinner Adam Zampa claiming three of them, as the match was turned on its head.

Moeen and Billings both misjudged deliveries that bowled them while Sam Curran’s first outing since being named player of the World Cup was sobering – a duck following seven wicketless overs with the ball.

Starc then speared deliveries into the stumps of Chris Woakes and David Willey, before Zampa wrapped things up with the dismissal of Liam Dawson. England were challenged to score 281 on a yawning pitch to send this unwanted series into a decider on Tuesday at the MCG, scene of Buttler’s team’s World Cup glory a week ago.

Its tired nature was put into context by the finale to Australia’s innings: the platform was set for 300-plus at 204 for four after 40 overs but although they muscled five sixes, they didn’t hit a single four in a final 10 overs punctuated by 20 dot balls.

Woakes in particular used the dry conditions to get the ball reverse swinging towards the death.

Australia’s 280 for eight was nevertheless a competitive score, founded on another sizeable contribution from Steve Smith, who had declared himself to be in his best touch for six years after his unbeaten 80 in the first game in Adelaide. 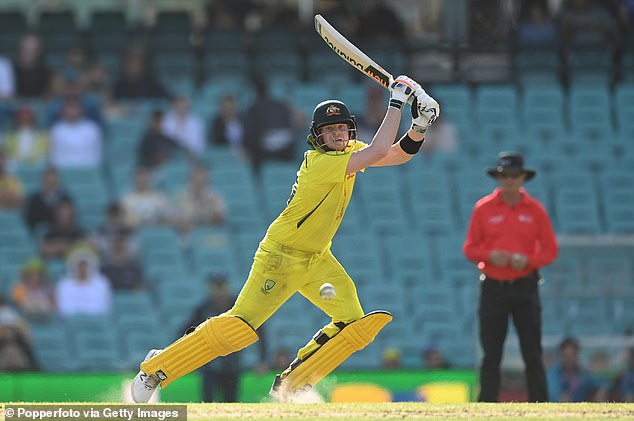 He looked to cash in on such rich touch with a 41st international hundred on his home ground but fell attempting to reach that landmark with a six.

Having chanced his arm in the previous over from Adil Rashid – plonking a ball into no man’s land on the leg side – his luck ran out in the Yorkshire leg-spinner’s 10th and final one of the innings.

Rashid reduced his pace, luring Smith into a hit down the ground that failed to clear Phil Salt at long-off, the dismissal sending him beyond Andrew Flintoff’s career haul of 168 one-day international wickets.

Only James Anderson, Darren Gough and Stuart Broad have taken more for England.

Earlier, two wickets in as many deliveries from Rashid – who finished with figures of 10-0-57-3 – stymied Australian progress in mid-innings, reducing them to 144 for four. 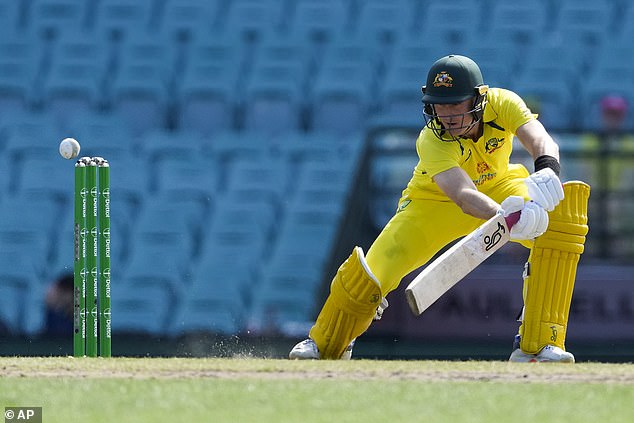 Marnus Labuschagne also passed 50 for the home side, his first in an ODI against England

First, Marnus Labuschagne, who had responded to the loss of a couple of early power play dismissals by launching his second ball from Moeen Ali for six, got himself in a two-minded twist and half-swept, half-flicked to mid-on soon after hitting a run-a-ball 50. Then, quicksilver reactions from Sam Billings, sporting the wicketkeeping gloves with Buttler resting, accounted for Alex Carey stumped.

The double blow forced Smith and Mitchell Marsh to take stock in a contest featuring multiple changes to both XIs.

With Pat Cummins rotated out of the home team with one eye on the upcoming Test series against West Indies, the armband went not to Carey – who deputised under previous captain Aaron Finch – or Test vice-captain Smith but Hazlewood.

And like Cummins earlier in the week, he celebrated his maiden outing as the Aussies’ one-day international captain with a victory.