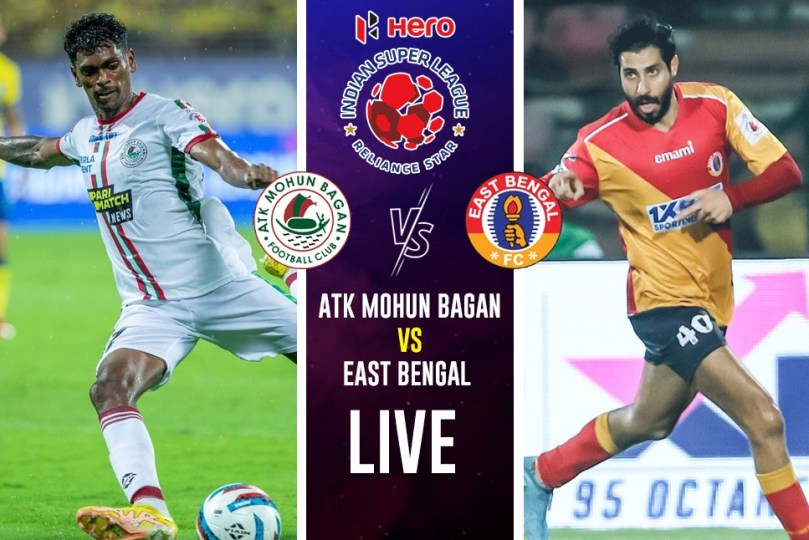 ATKMB vs EBFC LIVE Streaming – ATK Mohun Bagan vs East Bengal LIVE in ISL 2022: The Kolkata Derby, India’s largest football match will be played at 7:50PM today. The first Kolkata Derby of this ISL season is most awaited football match of the season. It is one of Indian football’s oldest matches. The excitement surrounding Saturday’s game is no different, with a sold-out crowd expected at the famous Salt Lake Stadium: Follow Indian Super League LIVE & Watch ISL 2022 LIVE Streaming on Disney+ Hotstar

Also Read: ATKMB vs EBFC LIVE: Pritam Kotal eager to impress Sourav Ganguly, says ‘With Dada planning to come, we have to…

ATK Mohun Bagan players may still be disappointed with their performance in the first encounter against Chennaiyin, in which they led 1-0 before conceding to goals from Kwame Karikari and Rahim Ali.However, the last encounter against the Kerala Blasters was far superior. Despite playing away from home, the Mariners dominated the game from the start, winning 5-2 due to a hat-trick from Dimitri Petratos and goals from Joni Kauko and Lenny Rodrigues.

East Bengal’s effort against Kerala Blasters was lackluster, as they lost 1-3, with Alex Lima scoring the only goal. After losing early in their second encounter against Goa, a Cleiton Silva penalty helped the Torchbearers tie the game at 1-1 until a 94th-minute freekick from Edu Bedia sealed their fate. However, Stephen Constantine’s men stunned NorthEast United in their most recent meeting. Silva, Charalampos Kyriakou, and Jordan O’Doherty all scored as their team defeated the opposition 3-1.

Mohun Bagan and East Bengal have met 382 times in all tournaments and friendly games, with East Bengal winning 132 times and Mohun Bagan winning 125 times. There have been 125 drawings. Following the merger, the green and maroon side of Kolkata has a clear advantage in head-to-head records. These two clubs have clashed four times in the ISL, with ATK Mohun Bagan coming out on top each time. The Mariners won their most recent meeting 3-1. Kiyan Nassiri, a young attacker who came on as a substitute, scored a magnificent hat-trick, whereas East Bengal’s sole goal was scored by Darren Sidoel, a former Dutch midfielder.

Given that his players barely put a foot wrong in the previous encounter against Kerala Blasters, ATK Mohun Bagan head coach Juan Ferrando may elect to present an unchanged starting XI from that game. One change, though, will not be shocking. Deepak Tangri struggled in midfield, and the Mariners improved when Rodrigues came on as a replacement. Rodrigues might be named to the starting XI in the Kolkata Derby due to his extensive experience.

Similarly, despite his team’s victory in the last match, Constantine is anticipated to make changes to the East Bengal starting XI. Right-back Sarthak Golui struggled to keep Jithis MS quiet against NorthEast United, but considering that the Mariners have a livewire in left-winger Liston Colaco, the very experienced Kyriakou might revert to his customary position in this encounter. Souvik Chakrabarti, who has recovered from his injury, might take his spot in the midfield. While Lima has recovered from his injury, O’Doherty is anticipated to keep his spot following a strong performance against the Highlanders.

See also  PLAYER RATINGS: Kane capped busy display with equaliser, but Mount and Sterling had an off night

What time will the ATK Mohun Bagan vs East Bengal match begin?

All the Indian Super League matches will begin from 7.30 PM IST.

Which TV channels will broadcast the ATK Mohun Bagan vs East Bengal match?

StarSports and StarSports HD TV channels will live broadcast the games in India.

How to watch the live streaming of the ATK Mohun Bagan vs East Bengal match?

All Indian Super League matches will be live-streamed on Disney+ Hotstar.