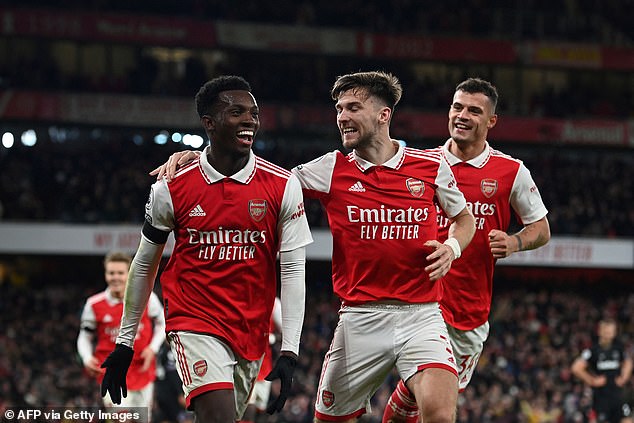 Arsene Wenger. Has it really been five years since he last turned up to this place? And could there ever be a more fitting way to welcome him back than the sort of exhibition that would have had nostalgia ringing like sleigh bells in his ears?

He saw it all, just as he had seen it all before – a side capable of squandering total domination to a counter-attack, and a side capable of turning a minor drama into a brilliant whirlwind and the extension of their lead at the top of the Premier League. It was a real show, just like the ones he used to know before it all went a little too wrong for far too long.

In nuts-and-bolts terms, that meant a recovery from Said Benrahma’s first-half penalty, with the comeback secured via some quite exceptional attacking football and three quality goals scored by Bukayo Saka, Gabriel Martinelli and Eddie Nketiah. At times, it was simply magnificent; at others, it was not.

But that’s the thing about this latest version of Arsenal – they seem to have found that spine. Both in terms of quality players through the middle of the pitch and in regards to an ability to withstand a bit of breeze. They are a robust. They find a way.

And for now, that is working. It means they have been able to resist the absence of Gabriel Jesus with the elevation of Nketiah – that will be an evolving narrative – and they have resumed momentum in the second act of this peculiar Premier League season. Can they sustain it with City on their heels? Who knows. All they can do is keep winning.

Arteta’s decisions from this point will, of course, go on to define the wider nature of this campaign, both for Arsenal and those bigger beasts in pursuit.

A look at his XI and substitutes here laid bare the paucity of his attacking reserves in the absence of Jesus, which already feels like a small hole beneath the waterline and an explanation for the growing urgency around their move for their prime target, the Shakhtar Donetsk winger Mykhaylo Mudryk.

A package worth £55million is now understood to have been offered for the Ukrainian, but Shakhtar have long been aware this is a seller’s market and their expectations will likely take the discussions to an uncomfortable place.

In the shorter term, and more immediately linked to the void left by Jesus, Nketiah has his chance at the tip of the striking three, with this having been the opening game of what we can reasonably assume will be a prolonged run of starts. His ability to score is no great secret — a return of five goals from the final seven matches of last season proved his adeptness at that function — but we do have to query what will be lost in Jesus’s sharper ability to enhance those around him.

That not a slight on Nketiah, who was decent to good in this game, but it is a fair recognition of what Jesus’s selflessness does for Gabriel Martinelli, Bukayo Saka, Martin Odegaard and Granit Xhaka.

In mitigating for his injured team-mate, it would be awfully ambitious to expect Nketiah to be all things to all those men, though it should be noted that his movement and awareness were brilliantly on point when he created what looked to be the opener for Saka on five minutes.

The goal was scratched off for a tight offside against Saka, which carried the consequence of nullifying Nketiah’s fine work in reading a through ball by Odegaard before back-heeling to the England winger to finish. At that stage and beyond, Arsenal played like the side that finished the first phase of the season so well.

They were clean, they were fast, they were picking holes, and they were riding some rough tactics, with Declan Rice and Jarrod Bowen going in hard on Martinelli inside the initial 10 minutes.

The combined output was a flurry of early Arsenal chances, with Nketiah too slow to the trigger on one counter, before a pair of others came and went for Xhaka. They were dominating without scoring — Wenger presumably remembers that dance a little too well.

The sucker punch came from a defensive error, or rather a pair of them. Primarily that meant the hesitation from William Saliba in closing down Michail Antonio, before he compounded the mistake with a lunge of desperation on Bowen, conceding the penalty. Aaron Ramsdale went to his left, Benrahma shot down the middle, and West Ham led.

Moyes, who has lost 17 times as a manager in games at Arsenal, allowed himself a smile, then another when his side survived a video referral for a penalty against Aaron Cresswell at the close of the half. The referee Michael Oliver visited the screen but ruled that Odegaard’s strike had hit Cresswell’s head and not his hand, so the possibility of a heist lived on.

Alas, within a quarter of an hour of the second half, it was on its knees, floored by a pair of fine goals. The first had a ring of fortune, with Odegaard mis-hitting what was plainly a drive at goal, with the upside it went directly to Saka. His touch to control and his finish to beat Lukasz Fabianski were a delight.

As was the move that brought this place to its feet, with Odegaard and Xhaka rotating possession to Martinelli, who cut in from the left and squeezed his shot between Fabianski and the near post.

That was nice; Nketiah’s was even better, both for the blur of the build-up and the swivel that buried Thilo Kehrer before he drilled past Fabianski.