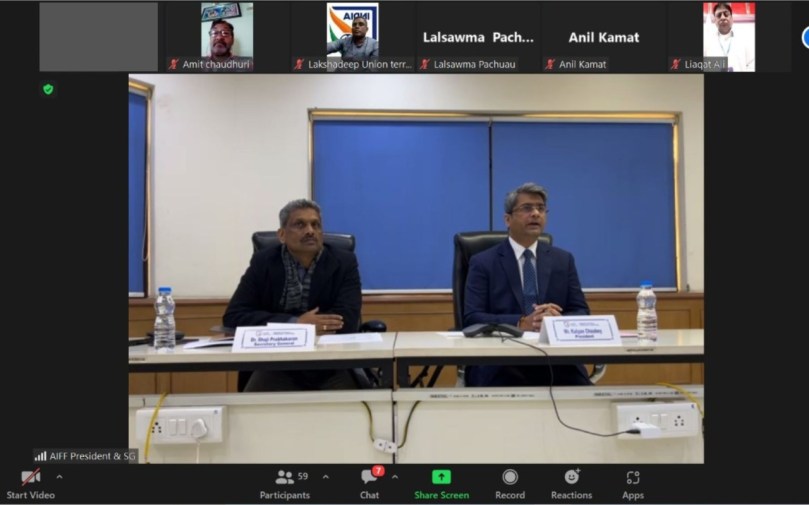 Present in the meeting along with the President was Secretary General Dr Shaji Prabhakaran. The meeting was attended by representatives from all the State Associations virtually.

The AIFF President welcomed all the State Association representatives in his opening address, and said, “We have completed over 100 days in office, and I am glad to see that we are all united in our endeavour to work together for the betterment of Indian Football. We will work as a team, as friends, as a family. This might not have always been the case, but I am glad to meet all of you here today. “The AIFF is also acting as a bridge between the FIFA-AFC and the State Associations, who in turn, will help in running football across the country,” he said.

“The revival of the Hero Santosh Trophy has also been a major talking point this month. The tournament has been taking place across three venues so far, and the feedback we have received is immense. Also there is great excitement around the Santosh Trophy since the semi-finals and the final will be held in Saudi Arabia,” he said. “The states have to play a very important role as they are some of the important stakeholders of Indian Football. They need to fast track all activities, and that’s how the AIFF is also helping the states in terms of manpower by creating experience from the states that every aspect of football will be getting due attention from the State FAs. The AIFF is there to support the process so that the biggest goals of Indian Football can be achieved. We are one team, and all activities at the state level need to happen. We are looking forward to taking football to a different level.”

AIFF Secretary General Dr Shaji Prabhakaran said, “I thank everyone for joining us today. You are the key people who will be taking Indian Football forward in the coming years. We will meet again to discuss the strategic Roadmap, which we have developed taking all your suggestions and plans, and will be presented on January 7 (2023).”

The AIFF, in the first order of the meet, requested the State Associations (who have not done so thus far), to host their respective Khelo India U-17 Girls Football Leagues. A request was also made to the State Associations to nominate their respective Football Ambassadors. States that have had former International players in the past could nominate them, while others were requested to nominate a former state team player.

Integrity is an important issue in modern day football, and the AIFF requested all it’s Member Associations to maintain a zero-tolerance policy on integrity related issues. The State Associations were asked to present the measures they plan to take in order to uphold the highest integrity in football played in their respective regions. AIFF will hold a series of meetings and organise education programmes to strengthen the integrity structure and take measures at the state level.

The AIFF Secretary General mentioned that the Federation has a number of plans in the new Roadmap for the development of Women’s Football. He further requested all State FAs to observe January 1 by organising grassroots activities involving budding women footballers.