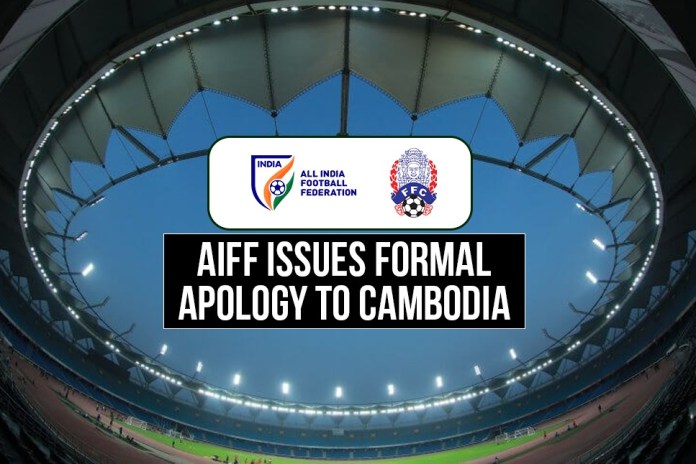 AFC Asian Cup Qualifiers: AIFF issues FORMAL Apology to Cambodia – The AIFF (All India Football Federation) has issued an apology to the Football Federation of Cambodia (FCC) after the unfortunate events that took place yesterday prior to India vs Cambodia game. Apart from the issues related to the delayed playing of the national anthem and the flag issues, the Cambodia team also projected their displeasure over the accommodation of the team in terms of food and lodging. Follow AFC Asian Cup Qualifiers Live Updates with InsideSport.IN

Following the game in which India was victorious with a scoreline of 2-0, the apex football body of the country, i.e the All India Football Federation, AIFF sent a heartfelt apology to the Football Federation of Cambodia where the former expressed not to repeat the technical faults and also expressed gratitude for the FCC for their understanding.

Before the commencement of the game, reports emerged from the Cambodia camp where the visitors were displeased owing to the services they received. The president of the Football Federation of Cambodia previously threatened not to take part in the game. He also further demanded an apology from the AFA, AFC, and the organizers after the concerned bodies failed to take proper care of the men’s football team in terms of food, accommodation, and the national flag.

The Cambodian team had to wait to hear their national anthem before the match after the organisers made an embarrassing mistake! 🇰🇭

The AIFF have now apologized to the Cambodia Football Federation for the same and also intended to co-operate on visas and hotel-related issues! 😕 pic.twitter.com/1oTw8pQ2nE

Anil Kamat the Assistant General Secretary of the AIFF sent an official letter which was a formal apology to the Football Federation of Cambodia. The official statement read, “In the first place let me thank you and your entire team for all cooperation provided in dealing with the issues related to visas to the team contingent.”

“Secondly, we also thank Cambodian Team management for the cooperation provided in dealing the team hotel matters in Kolkata and assure that LOC will do their best to meet the demands of the team and that no such incidents take place in future.

“Further, we would like to apologise to the Federation and the entire team for the hotel related issues as well as for the issues that happened at the time of playing the Cambodian National Anthem.”

“The issues related in playing the Cambodian National Anthem were discussed with the technical team and was informed that it was due to technical fault at the screen. Our entire team will work hard to see that such incidents are not repeated during the remaining matches of the Competition and at the team hotel.”