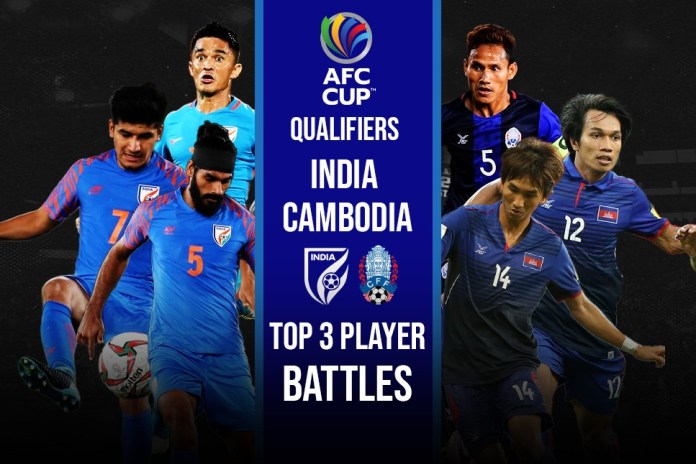 Also Read: From Liston Colaco to Sahal Abdul Samad, Top 5 Players to WATCH OUT for in the Indian Team

Fans will flock Kolkata’s Vivekananda Yuva Bharati Krirangan in huge numbers to cheer for India, and Sunil Chhetri’s men will be determined to give it their all. Though they are the obvious favourites to win against Cambodia, the Angkor Warriors should not be taken lightly at all.

The most anticipated player battle is going to be the one between Sunil Chhetri and Soeuy Visal – the two captains. On one hand will be India’s leading goal-scorer, Chhetri, who has scored 80 goals in his international career. But entrusted with the task of keeping him under control will be Cambodia’s inspirational leader, Visal. Though still only 26 years of age, Visal is already among his team’s most experienced players. He is a centre-back and his known for his no-nonsense defending.

Like the first one, our second mention also is about a striker vs defender battle. India will be looking to keep a clean sheet in this match and their hopes will lie on Sandesh Jhingan, the ATK Mohun Bagan centre-back, who is a rock in the men in blue’s backline. However, up against him will be lethal striker Keo Sokpheng, who is Cambodia’s leading goal-scorer among the current squad.

Last but not the least, there will also be a fierce battle in the midfield. For India, Anirudh Thapa is expected to be the midfield general, but he will not have an easy day at the office today. Up against him will be Sos Suhana – the 30-year-old midfielder who currently is the most experienced player in the Cambodian team.