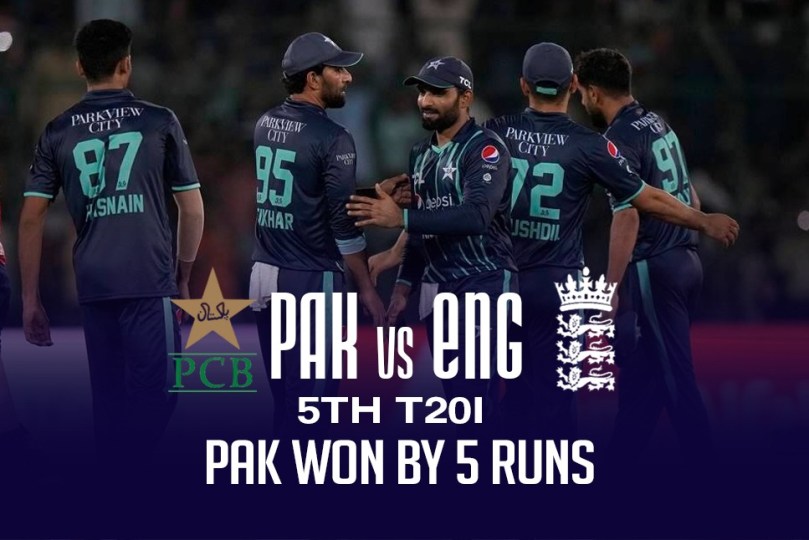 PAK vs ENG Highlights: Pakistan vs England 5th T20 Highlights: Pakistan win by 5 runs –  Aamer Jamal showed his nerves of steel on debut as the youngster helped Pakistan clinch a five-run win in Lahore. Jamal kept Moeen Ali quiet in the final over of the innings to see his team over the line. Earlier, Mohammad Rizwan played a lone hand in getting Pakistan to 145. The hosts now lead the series 3-2.  Follow PAK vs ENG T20 Live Updates with InsideSport.IN

Defending 15 runs off the final over, Aamer Jamal nailed the wide line yorkers to perfection to help seal an unlikely win. Defending a modest 145, the hosts got off to a fine start with Mohammad Wasim Jr and Haris Rauf striking thrice in the powerplay.

Dawid Malan played a solid hand but saw wickets tumbling at the other before Moeen Ali joined the chase. The England captain saw his side slip to 85/6 before taking matters in his own hands.

Having taken his time initially, Moeen launched into Wasim Jr and Rauf into the stands. Woakes struggled to give him the required support with the equation coming to 15 off the last over. Moeen did manage to hit a six and reach his fifty but ultimately his side fell short.

Earlier, Mark Wood once again wreaked havoc as Pakistan were bowled out for 145. Mohammad Rizwan held his end while the English pacers accounted for wickets at regular intervals of the game.

Rizwan eventually was the lone man standing and he smashed his 4th half-century of the series. Rauf and Wasim Jr both fetched a boundary each to take Pakistan to 145. Wood finished with a spell of 3/20, while Sam Curran and David Willey struck twice each.