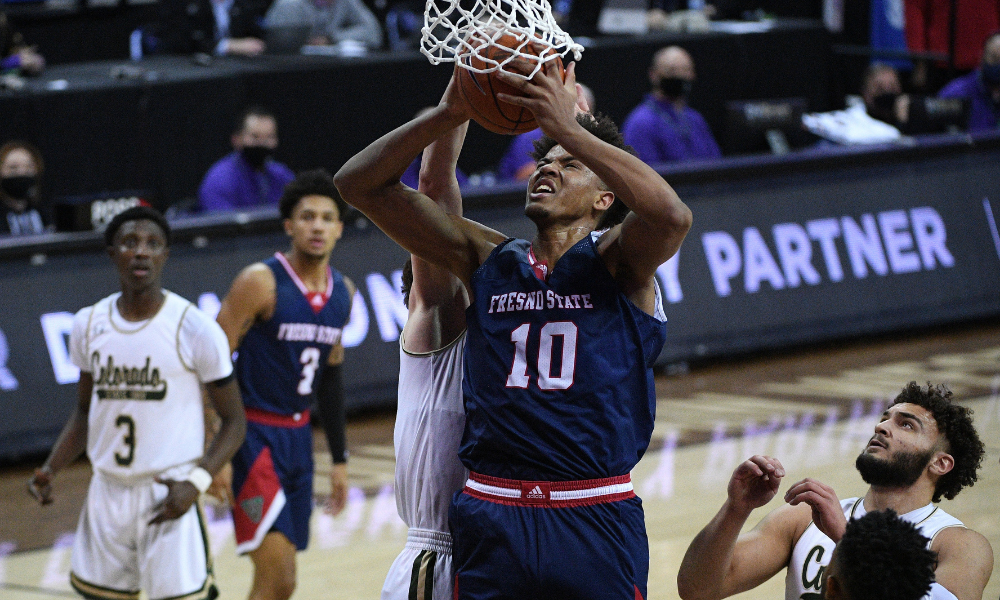 Where will he be taken?

Who is Robinson’s NBA comp

The NBA draft tip-off is here as 60 players will hear their name get called. The Las Vegas native Orlando Robinson looks to be the first player drafted out of Fresno State since Paul George in 2010, who went 10th overall to the Indiana Pacers. Robinson is currently projected to be undrafted to a late 2nd round pick and could be one of the biggest sleepers in the draft.

Robinson checks in at 6-foot-11 with a 7-foot-4 wingspan, but Robinson isn’t just your typical big man as he can shoot the ball really well and help stretch out the floor shooting 48.4% from the field his junior year and 35% from the three. Orlando also shot 71.6% from the free throw line and led the Bulldogs in scoring with 19.4 points per game this season. One of the things that really stands out with Robinson is his ability to create his own shot. Most of the Bulldogs offense came from Robinson and had a lot of possessions that were at the end of the shot clock. Robinson’s ability to get his own shot and play a lot of ISO ball really should stand out to the scouts and will play a big factor at the next level. A big who can stretch the floor and handle the ball creating offense from anywhere is hard to find.

Robinson has great size and strength. Orlando does a great job using his strength to finish plays. But the most underrated part of Robinson’s post skills is playing anywhere in the post and his ability to create for teammates in the post. Players like Jokic, Embiid, and Antetokounmpo are players who expand their game by creating from the post and get everyone around them going.

The stats may not show that for Robinson but the tape definitely shows Orlando has a great vision with the ability to set up his teammates. This is another area that can help Robinson get early minutes at the next level.

Robinson was not only the anchor on offense but on defense as well. He led the Bulldogs in blocks with 43 blocks this season. He also had 36 steals this season. The man did it all for the Bulldogs. Robinson can guard multiple positions. He has a good wingspan to contest shots and plays with a lot of energy. He does a great job stepping into passing lanes and forcing turnovers. His size and length allows him to cover a lot of ground. Orlando still has a lot of room to grow on the defensive side of the ball but with the right system he will be fine.

Robinson doesn’t have many weaknesses but physicality can be one. Too many times Robinson settled for jump shots or didn’t finish at the rim. I would  like to see Orlando be more aggressive in the post and finishing around the rim.  Defensively I would like to see Robinson take less gambles at the ball and play more with his body. This did cause him to get in foul trouble in some games which played a big factor into the team’s success. I believe Robinson has minor weaknesses which won’t hurt him too much at the next level.

I believe Robinson is going to be one of the biggest steals in this draft. He hasn’t gotten the attention and hype he deserves. His games translate well to the next level and he has a lot of room to grow and become a big factor on an NBA Team. Orlando has all the skills, tools, and intangibles for the NBA. Robinson will the drafted in the second round making him the first Bulldogs since 2010 to be drafted out of Fresno State.

2022 NBA Mock Draft: Where Are The Mountain West Players?